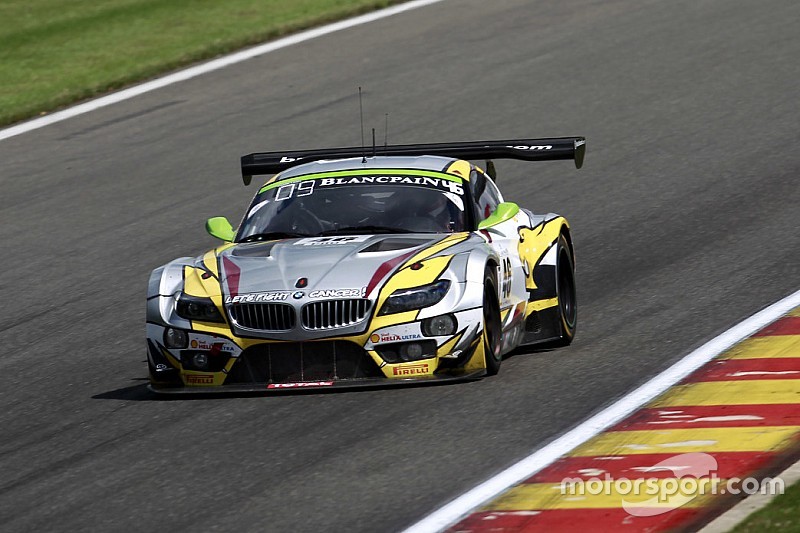 There was heartbreak but also hope for the Marc VDS BMW squad as the Spa 24 Hours went into the final four hours this morning.

As the No.46 BMW Z4 of Nicky Catsburg, Lucas Luhr and Markus Palttala led the race, the sister No.45 car driven by Dirk Werner spun out of the lead with five and a half hours of the race remaining.

Werner appeared to suffer a seized engine as he negotiated the Bruxelles right hander and slewed off the track and in to retirement. With team boss Bas Leinders just digesting this bitter pill, Catsburg in the No.46 car soothed the pain by hunting down Stephane Ortelli's No.2 Audi.

After Catsburg handed over to Luhr, the BMW Z4 enjoyed a 25-second lead over the WRT Audi, which was in the hands of Nico Muller once again.

Still in contention in third place was the No.99 Rowe Mercedes, which was still enjoying a faultless race and continued to pose a threat on the lead lap after strong stints by Nico Bastian.

With just four and a half hours of the race remaining the top three were covered by just 15 seconds, albeit seemingly on off-set pit strategies.

The leading BMW seemed to have the edge on pace in the fully dry conditions while Audi appeared to struggle slightly more on the spec Pirelli tyres. BMW also had a small advantage on fuel stops which were reported to take slightly less time than the Audi.

The popular ROAL Motorsport BMW Z4, specially adapted for Alessandro Zanardi to compete in his first ever 24-hour endurance event broke through in to the top ten in the late morning.

In between the two Audi's came the leading PRO-AM Ferrari 458 GT3 of AF Corse, with Pasin Lathouras in the cockpit.

The French driver was capitalising on some sensational stints by Gianmaria Bruni and Alessandro Pier Giudi. As a result the AF Corse Ferrari lead increased substantially over the No.51 sister car driven by Matt Griffin, Duncan Cameron, Davide Rigon and Fransico Guedes.

A gallant third in PRO-AM was still the Barwell Motorsport run Ecurie Eccose BMW with Alexander Sims proving to be one of the stars of the race so far. The rapid British racer showed outstanding pace in the early morning to ensure that he and team mates Oliver Bryant, Alastair McCaig and Devon Modell ran eighth overall.

The AM class was still annexed by the Team Parker Audi R8 LMS who had a four lap advantage over the No.111 Kessel Racing Ferrari. This was despite a penalty for exceeding track limits by former British F3000 front runner Julian Westwood.