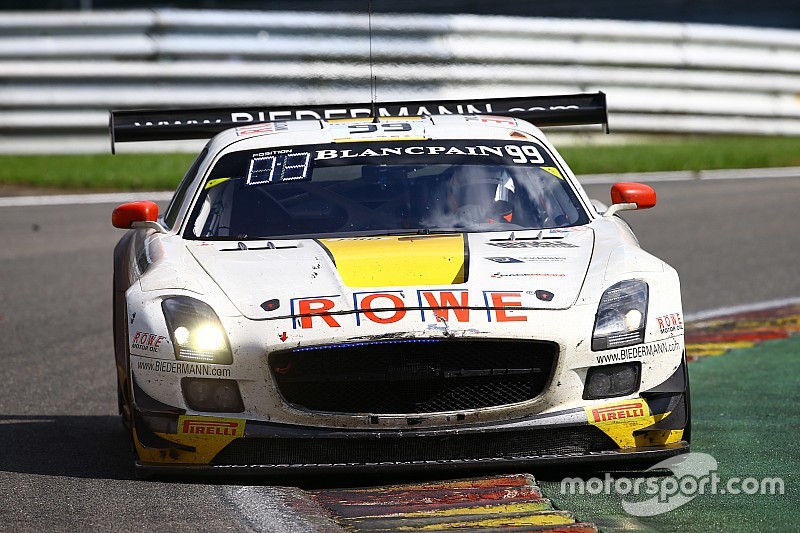 A brilliant performance and the dream of a podium finish in classic Blancpain GT Series endurance race blown by a technical failure.

Worms - For more than 23 hours, the 24-hour race at Spa in Belgium looked like a perfect affair for Rowe Racing. However, a technical failure blew the hopes of a podium finish for the team from Worms in Germany. Nico Bastian (GER) had to park the SLS AMG GT3 with starting number #99 just 45 minutes before the end of the race. Eventually, Rowe Racing is classified in 16th place overall and ninth in the Pro Cup.

Bastian had brought the Rowe Racing SLS safely through the rainy and difficult opening stages of the race. The first four hours saw the team get its car up among the front runners courtesy of a clever strategy and a good tyre choice. In fourth place, Daniel Juncadella (ESP) took over the steering wheel for his maiden 24-hour race. During the night, Stef Dusseldorp (NED) brought the car up into the lead by setting the fastest lap times in the field.

The sudden technical failure caught us by surprise.

The trio of drivers was able to defend its leading position both after six and after twelve hours in the race and thus scored valuable points for the championship classification. A fierce battle for the podium positions between BMW, Audi and Rowe Racing’s Mercedes-AMG marked the final hours, with lead changes by the hour. The retirement without the team’s own fault just before the end of the race, caused by a problem on the alternator and the consequential damage, was all the more sad because of this.

Rowe Racing’s team principal Hans-Peter Naundorf: “Of course, everybody in the team is really disappointed. There were less than 60 minutes to go, we were in ‘cruising mode’ and had made a precautionary pit stop just a little bit earlier. The sudden technical failure caught us by surprise. Being in third place so closely to the finish and then not being able to celebrate on the podium is really tough. Back in 2013, we already retired while on course for a podium finish.

However, my team can be very proud of itself. Here, we have shown an extremely strong and faultless performance. My main thanks and my respect especially go out to my mechanics, engineers and drivers for a remarkable and closed team performance. Many thanks also to our sponsors and partners, without whom we wouldn’t have been able to pull off such a show. Last but not least also my compliments to the organisers of the event and the numerous fans who turn such a huge event into something really special.”

Almirola says move to SHR "has been really exciting"