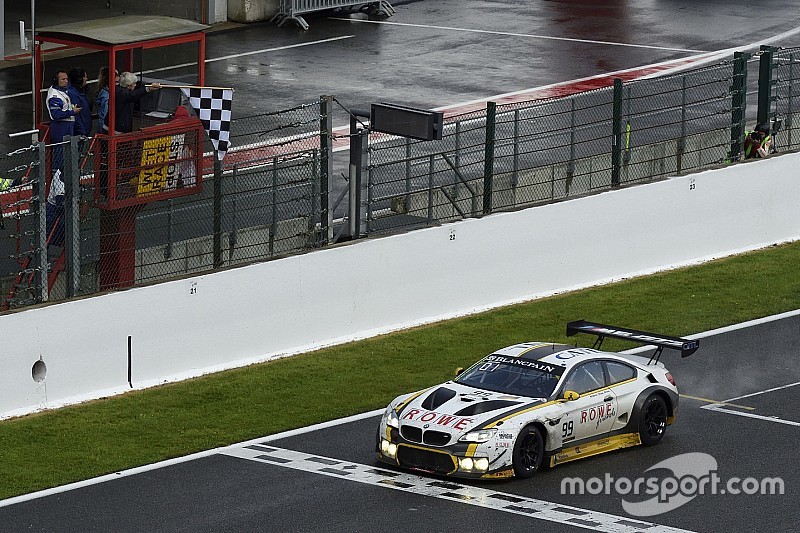 The #99 Rowe BMW of Alex Sims, Philipp Eng, and Maxime Martin survived a late downpour to claim victory at the 2016 running of the 24 Hours of Spa.

For the majority of the final quarter of the race it was a two-way battle between the BMW and the #8 Bentley of Andy Soucek, Maxime Soulet, and Wolfgang Reip, each car taking its turn in the lead.

In the end, that battle was essentially decided by two pitstops. The first was a little over three hours from the end, the Bentley crew reacting slightly late to a Full Course Yellow and bringing the #8 into the pits as the race went green again.

That led to the final proper lead change, the #99 BMW – having stopped during the FCY – sweeping into P1.

Not that the race was done there; the Bentley had enough speed to slowly catch the leading BMW, setting up a potential final-hour fight for victory. But with 90 minutes to go all chances of that disappeared when the #8 had to make an unscheduled stop for a right-rear puncture.

To add insult to injury, the #8 was given a FCY infringement drive-through penalty 45 minutes from the end.

The BMW, meanwhile, was all set for a clear run to the flag with a lap up its sleeve – only to have a downpour a half hour from the end makes things a little less straightforward. Such was the #99’s advantage, however, the car was able to grab wets and still cruise comfortably to victory.

“It’s a very proud moment for all involved BMW has done a fantastic job with the M6 in its first year of racing,” said Sims.

“Winning the biggest GT race in the world in the first year, it doesn’t get much better than that. Full credit to BMW and Rowe. They’ve prepared it fantastically. And to my co-drivers Maxime and Philipp, who have done a superb job all weekend."

Mercedes pulled off one heck of a comeback, salvaging a second place after six of its cars were disqualified from the Superpole qualifying session and forced to serve a five-minute penalty at the beginning of the race.

It was the #88 AKKA ASP Mercedes (Felix Rosenqvist/Tristan Vautier/ Renger van der Zande) that wound up near the front, surviving the carnage in the final minutes to pop out in second after the flurry of stops.

“Everything just happened at the end, it was so unexpected,” said Rosenqvist. “It was so difficult, so crazy with all the traffic at the end. It was just survival.”

The #28 WRT finished third after a rollercoaster of a final quarter of the race. Having seemingly been bumped off the podium thanks to a drive-through for a pitstop infringement with two hours to go, Laurens Vanthoor, Rene Rast, and Nico Muller wound up in third when the #86 HTP Mercedes – which had remarkably been on for second place – was slapped with a drive-through just a few laps from the end thanks to an unsafe release during the rain storm.

As a result, the Maximilian Gotz/Thomas Jager/Gary Paffett Mercedes was bumped back to fifth, still a good result given they essentially started two laps down, behind the #8 Bentley, which lost a bunch of time during the drama at the end.

The #6 WRT Audi had been in the hunt for the win around the 18-hour mark, but a decision to switch to wets - when the first band of rain came with five and a half hours to go - and then stay on the treaded rubber as the track began to dry put the car a long way behind the two leaders.

The second band of rain, however, may have brought the car back into contention – had it still been running. But with just under five hours to go, with Christopher Mies crawling back to the pits with a left-rear puncture, the Audi burst into flames at the exit of Pouhon and was immediately out of the race.