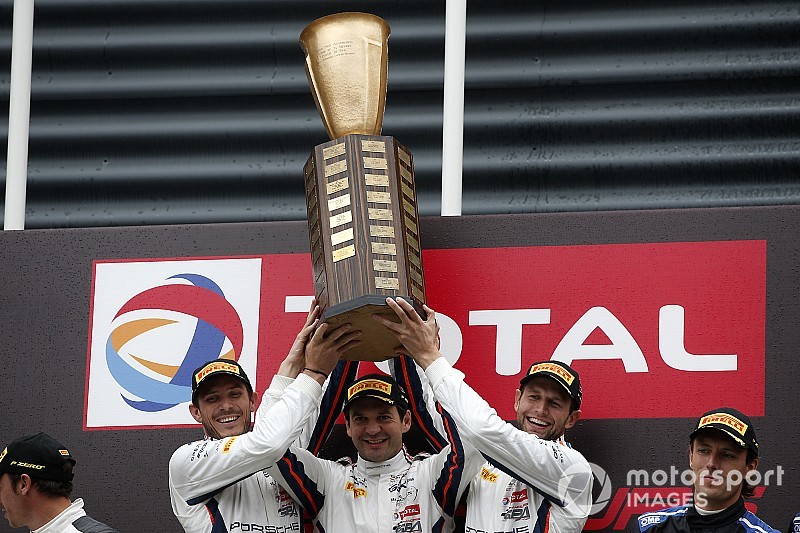 Porsche secured its first victory in the Spa 24 Hours since 2010 thanks to the GPX Racing squad at the end of a disrupted, rain-affected race.

Estre had been some 40s clear of Tandy at one stage in the final hour, but Tandy had halved that gap by the time a final full-course yellow period was called with 24 minutes to go when Benny Simonsen crashed the #16 Porsche on the run down to Pouhon.

The race was resumed with 14 minutes left on the clock, only for another FCY to be called minutes later when Klaus Bachler's #54 Dinamic Porsche and Rene Rast's #1 WRT Audi R8 LMS made contact at Pouhon, an incident that put the latter car out of fourth place.

Estre's lead was down to five seconds for the final dash to the flag, and he duly held on by 3.347s over Tandy in the remaining four minutes.

Third went to the #4 Black Falcon Mercedes AMG-GT3 shared by Maro Engel, Yelmer Buurman and Luca Stolz, 17s down on the winning Porsche, while the #25 Sainteloc Audi of Markus Winkelhock, Frederic Vervisch and Christopher Haase was the final lead lap finisher in fourth.

The race had been red-flagged for almost six hours due to poor weather in the early morning hours before finally resuming with some five hours left on the clock.

At this stage, three cars that had not made their mandatory five-minute technical pitstops led the way, meaning the Blancpain GT Series Endurance Cup points-leading SMP Racing Ferrari that had led at both the six-hour mark and 12-hour mark effectively held the advantage.

But Mikhail Aleshin had already surrendered the lead to Rast's Audi before he spun on a wet kerb exiting Fagnes, hitting the KCMG Nissan of Oliver Jarvis and damaging his suspension. The #72 car Aleshin shared with Davide Rigon and Miguel Molina was later retired.

The #1 Audi driven by Rast and his fellow DTM racers Robin Frijns and Nico Muller led until Muller spun at Les Combes while coming under pressure from a charging Estre.

Estre had just dispatched polesitter Engel for second, which became the lead when Muller had his off, and pulled away to the tune of over 10s in the penultimate hour as the Mercedes struggled to keep up with the Porsche in the damp closing stages.

The Black Falcon car lost further time at its final pitstop as Engel came in with just over 65 minutes remaining, meaning the team had to hold the German for 20 seconds to avoid falling foul of the rules governing maximum stint lengths - dropping Engel behind Tandy.

Completing the top five, albeit one lap down, was the #98 ROWE Racing Porsche after Mathieu Jaminet prevailed over the solo factory Honda NSX GT3 Evo driven by Renger van der Zande in a final-lap battle.

Two more Porsches secured top-10 finishes, the #99 ROWE car in seventh and the #117 Team75 Bernhard car in ninth, either side of the best of the Lamborghini Huracan GT3 Evos, the #563 FFF Racing car.

Defending Spa winner BMW just failed to get a car inside the top 10, with the Walkenhorst-run M6 GT3 that had been second at the time of the red flag ending up 11th at the finish.

Aston Martin's top Vantage GT3 was the #76 R-Motorsport car, three laps down, one place ahead of the best of the KCMG-run Nissan GT-R NISMO GT3s.

Bentley endured a race to forget with its four-strong squad of M-Sport-run Continental GT3s, the best of which finished in 29th place and four laps down.

Ferrari also had a disastrous outing as all four of its Intercontinental GT Challenge-nominated cars failed to finish, including the #51 entry crewed by James Calado, Alessandro Pier Guidi and Sam Bird after Pier Guidi crashed out in the night.