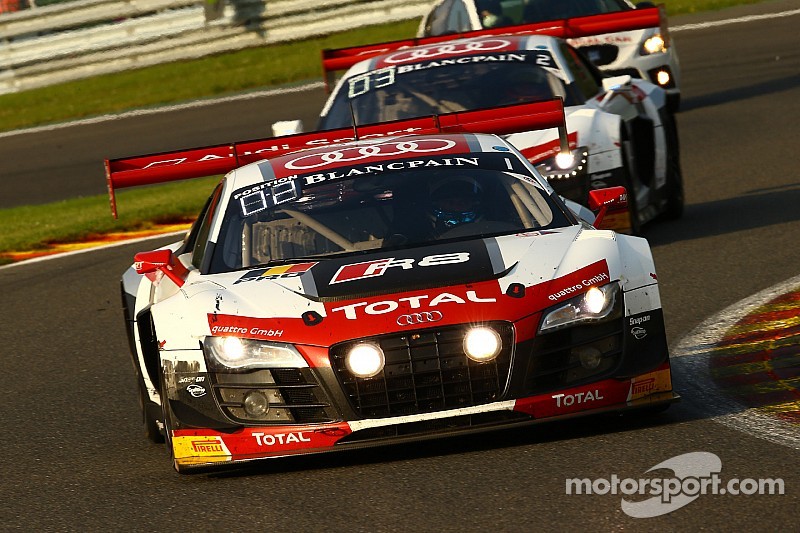 Ingolstadt/Spa, July 27, 2014  Audi has won the worlds toughest GT3 race at Spa. In the battle of eleven marques and 60 participants, the R8 LMS ultra prevailed for the third time in four years in the classic race in the Ardennes that celebrated its 90th anniversary this year. The Belgian Audi Club Team WRT took victory in its home round with the driver trio Laurens Vanthoor/René Rast/Markus Winkelhock (B/D/D). Rast and Winkelhock had previously achieved victory with Audi at the Nürburgring together with two other team-mates.

Audi has impressively demonstrated its endurance racing expertise in the 2014 season. In June, the company won the Le Mans 24 Hours for an amazing 13th time. Only a week following this victory of the R18 e-tron quattro hybrid sports car, the brand celebrated its next 24-hour race win at the Nürburgring with the R8 LMS ultra. Now, the third endurance race victory within six weeks was scored at Spa. With that, Audi, just like in 2012, has won three major international motorsport classics in the same year.

Laurens Vanthoor/René Rast/Markus Winkelhock had started the race from the pole position and been leading it for the first two hours. A turbulent phase of the race with numerous accidents was followed by four long safety car periods between 6 and 8 p.m. on Saturday night, which clearly changed the classification. The subsequent winners dropped to sixth place during this phase. Only in the seventh hour of the race, Laurens Vanthoor took the top spot again. Due to the different pit stop strategies the lead kept changing. In the morning, the BMW team Marc VDS Racing had an advantage, which the three Audi drivers progressively reduced. In the 21st hour of the race, René Rast took the lead, which he briefly lost again due to a change of the brake pads. Afterwards, the Audi driver battled and went on to re-capture first place 75 minutes before the end of the race. Different pit stop strategies caused the lead to change again in the last hour of the race. In the end, Audi celebrated its third victory at Spa after 2011 and 2012. Laurens Vanthoor is the new leader of the Blancpain Endurance Series standings before the finale to be held at the Nürburgring on September 21.

Christopher Mies/James Nash/Frank Stippler (D/GB/D), who competed for the Belgian Audi Club Team WRT as well, completed the podium in third place. On Saturday, the squad had lost valuable time due to a drive-through penalty. Another Audi team followed in fourth place overall. Saintéloc Racing, with a consistently fast drive by Grégory Guilvert/Stéphane Ortelli/Edward Sandström (F/MC/S), in third place, secured a strong position in the standings of the Blancpain Endurance Series, which includes the Spa 24 Hours.

Two new customers of Audi Sport customer racing delivered remarkable performances as well. ISR from the Czech Republic and Team Parker Racing from Great Britain relied on the R8 LMS ultra for the first time this year. They contested their first 24-hour race with the GT3 race car and both finished. ISR crossed the finish line with Marc Basseng/Fabian Hamprecht/Filip Salaquarda (D/D/CZ) in 14th place. Team Parker Racing with Ian Loggie/Leonid Machitski/Carl Rosenblad/Julian Westwood (GB/RUS/S/GB) took 28th place in the overall classification and second in the Gentlemen Trophy. Another Audi driver team achieved a good position in class as well: Jean-Luc Blanchemain/Fred Bouvy/Christian Kelders/Vincent Radermecker (F/B/B/B) managed the leap into the top ten of the Pro-Am class. The driver line-up consisting of pros and amateurs took ninth place in its class and position 20 overall.

In contrast, two other Audi squads suffered misfortune. The Le Mans winners Marcel Fässler/André Lotterer/Benoît Tréluyer were headed for a podium finish five hours before the end of the race when a rival collided with the car of the Belgian Audi Club Team WRT. The subsequent penalty imposed on the opponent in the crash was not much consolation, as the resultant change of the left front suspension and the splitter caused the Audi squad to drop to eleventh place. Jean-Paul Buffin/Claude-Yves Gosselin/Philippe Haezebrouck/Marc Rostan (F/F/F/F) with Saintéloc Racing were running in 35th place when they were forced to retire due to an accident in the 17th hour of the race.

Sincere congratulations to our winners and to our other teams, as well as to our challengers, who made maximum demands on us, said Romolo Liebchen, Head of Audi Sport customer racing. The anniversary race in the events 90th year was an absolute classic, in which the outcome was open to the very end and that will go down in history. All eight Audi R8 LMS ultra cars impressed due to their high reliability and good pace. In addition to the victory by the Belgian Audi Club Team WRT, were happy about Laurens Vanthoor taking the lead of the standings because now weve got perfect chances of winning the title in the Blancpain Endurance Series as well.