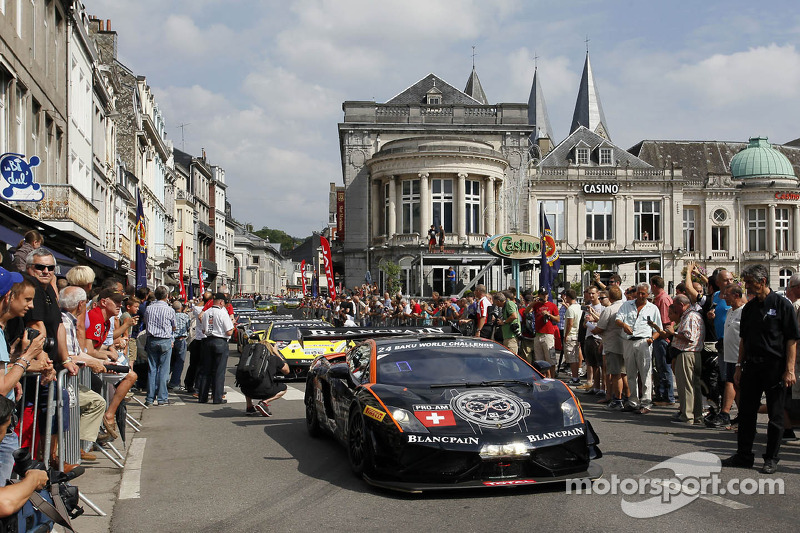 From July 23rd to July 27th there will be an abundance of activities organised trackside, from cocktails in the sky through DJ concerts to virtual races.

Even though the Total 24 Hours of Spa is the biggest race in the world exclusively reserved for GT cars, there is a lot more to enjoy during the Belgian Classic than the track action alone. From July 23rd to July 27th there will be an abundance of activities organised trackside, from cocktails in the sky through DJ concerts to virtual races in The Lotto Village and a parade to the town centre of Spa… An overview.

Supercars on and off track

This is a unique event in the whole of the motorsport world: all the cars entered in the Total 24 Hours of Spa will take part in the traditional parade on Wednesday 23rd July. The GT3 machines will use the public roads, starting from the endurance pitlane of the circuit to drive to Spa's scenic town centre and back again! The parade will be followed by a huge party in the heart of the city with music, autographs sessions, podiums and driver interviews.

On Friday evening and Saturday at noon, time for the Supercars! The track will be overwhelmed by the most beautiful cars in the world. The prestigious “GT Club by RACB” will complete the exhibitions in the paddock with Bentley, Ferrari, McLaren, Jaguar, Audi, Nissan, Ford, Porsche and BMW displays. Be sure to bring your camera!

Could I have an autograph, please?


If you want a close up look to the cars and drivers of the Total 24 Hours of Spa, be sure not to miss the pit walks. There will be open pits to all members of the public on Thursday and Friday evenings as well as at midday on Saturday. Autograph sessions will be held on each of these days.

Also, during the 24 hours' race week, many events will be organised for fans who can enter the ‘backstage’ of the event to get even closer to their heroes. Many teams will open their garages on Wednesday morning from 10:00 to 12:00 and will welcome enthusiasts to view the cars, talk to the drivers and engineers, as well as giving insight into decoding a GT3 car, finding out about the strategy of the team, the refuelling procedure and much more.

Regarding the organisation side of the event there will be a chance to visit race control, timekeeping, the Pirelli race support area and the Total competition petrol station in a rare chance to understand how the most beautiful GT-race in the world works. Make your bookings on endurance-info.com or turbomagazine.be.

Close to the racing


Even during the race you will be able to get a close-up look at the action. Two pit boxes – one in the F1 pitlane and one in the endurance pitlane – will be open to the holders of a paddock pass. The ideal location to watch the team crews in action during the pitstops. Owning a paddock pass holds other advantages as well: this year, the terraces of the F1 pit building will be open to the public, providing the fans with a unique view of the pitlane and the track.


The Lotto Village will be bigger and better this year, with the famous Car Wash Show, the setting up of a Kid's Village (500 m² dedicated to children from 2 to 14 years), manufacturers’ exhibitions, more shops than your wallet can bear, fairground amusements and hot air balloons. On Saturday Night the village becomes the scene of the now traditional concert. After three years of success thanks to highly motivated artists like Bob Sinclar, Faithless and Milk Inc., this year we can introduce a line-up of internationally renowned DJ’s: Belgian Mix My Day-residents Ice Kream, Swiss star Quentin Mosimann (voted best DJ in 2014), Belgian hit machine Yves V and World Music Award nominee Joachim Garraud, an internationally renowned DJ from France. The concert starts at 21:00 and the DJ’s will move the dance crowd until the early hours of Sunday morning.


The Nismo GT Academy has produced some fine young GT racers in recent history, with some of them even taking part in the Total 24 Hours of Spa itself. Each year the GT Academy is looking for new ‘gamers-turned-racers’ and one of the final qualifying rounds before the European Race Camp in Silverstone will be held on Saturday evening. The best Belgian, Dutch and Luxemburg candidates will be given a final chance to get one of three wild cards to travel to Great Britain and join the finals. Come and watch these future stars of racing in action!

Go-Kart track: Time to move up a gear


The Royal Automobile Club of Belgium go-kart track, close to the race track at Blanchimont, has been completely revamped. It will be open throughout the week of the Total 24 Hours of Spa. Connected to the village by a shuttle, the go-kart track will allow all fans to live out their passion, whilst the cars of the Total 24 Hours of Spa pass only a couple of metres away.


Dinner with a view: Raidillon Café


If you want to enjoy a good meal whilst admiring one of the most iconic views of the legendary Spa circuit, come and visit the Raidillon Café at the famous corner bearing the same name. The Total 24 hours of Spa restaurant at the top of the world’s famous corner is open to everyone. At this magical place you will have the opportunity to recharge your batteries and not miss a second of the race.

Inside the track. Literally


If you would like to take a unique look at the raw speed of the cars, a shuttle service can take you on a guided tour along the service roads inside the track, and you will even be able to enjoy a glass of bubbly at the Combes champagne bar as well.

Cocktail in the Sky


Want to take a look at the Raidillon from another point of view? Be sure to check out the Cocktail in the Sky, placed at La Source corner in partnership with Knokke Out. You can enjoy a cocktail while being lifted several metres off the ground, which gives an unequalled view over the track, the paddock and its surroundings. Best selfie opportunity of the weekend, surely! For those who want to enjoy the race while being treated as a star, Knokke Out proposes several VIP packages that will blow your head off.


For those who want to stay close to one of the most beautiful tracks in the world, numerous camping sites will be open during the week of the Total 24 Hours of Spa.