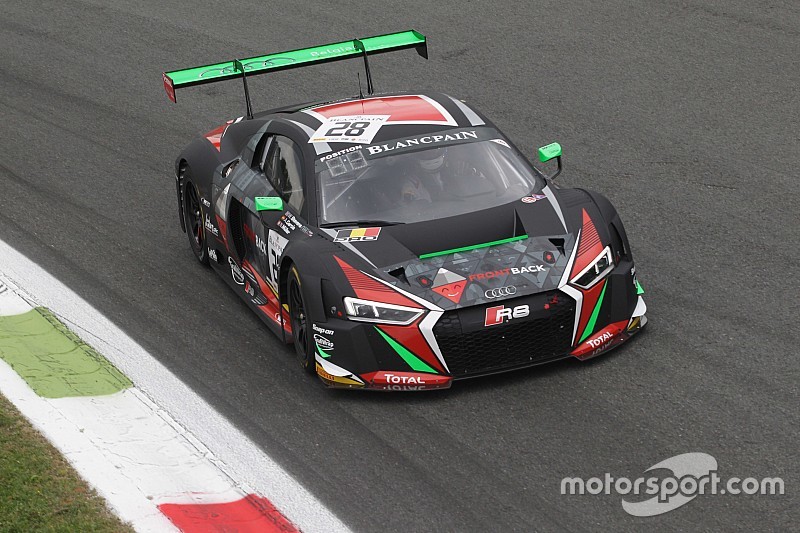 García-Müller-Stevens finished 6th and first of the Audis R8 LMS, while the Vanthoor brothers and Vervisch took 9th.

It was a typical Monza endurance race for the opening of the Endurance Cup of the Blancpain GT Series, with a lot of ‘power play’ and very close competition, which ended with a good result for the Belgian Audi Club Team WRT, who placed two cars in the top 10: García-Müller-Stevens finished 6th and first of the Audis R8 LMS, while the Vanthoor brothers and Vervisch took 9th. The other three cars of the Belgian squad also finished, confirming a good team performance on a track that confirmed to be not the most suited to the R8s.

Team Principal Vincent Vosse had a balanced analysis after the race: “It wasn’t our luckiest day, but overall, both the team and the drivers did a very good job. The race gave us some indications on things that we can improve for the forthcoming endurance races, and we’ll take it from there. We knew that Monza’s straights were going to be tough on us and the race proved it. So, all in all, we are satisfied with the result, given also the very close competition”.

One fact illustrates that in a perfect way: there were no less than 31 cars within the same second at the top of the time sheets after qualifying! The Belgian Audi Club Team WRT had three of its cars in that group, with #1 (L.Vanthoor-D.Vanthoor-Vervisch) in P7, #28 (Garcia-Stevens-Müller) in P19 and #3 (Baptista-Jimenez-Albuquerque) in P27. Frijns-Meadows-Leonard on car #2 and Kox-DeLeener-Käffer on car #4 were not very far away, as they qualified in P38 and P39, respectively.

The race saw a very solid race from García-Stevens-Müller, which consistently were in the top 15 from the beginning and eventually took a valuable sixth position (5th among Pro cars), with Will Stevens explaining that “compared to Misano, I am starting to understand the car much better.”

Car #1 was less lucky: it was P8 one hour into the race, but then had to serve a drive-through when Dries Vanthoor had a contact with one of the Bentleys at the end of his stint, finishing ninth.

Car #3 (Baptista-Jimenez-Albuquerque) had a pretty consistent race, that the Portuguese-speaking trio concluded in a good P16. Kox-DeLeneer-Käffer on car #4 finished in P26 after a strong race too, but having suffered a puncture in the first part of the race.

Things were more hectic for car #2 (Frijns-Meadows-Leonard), which suffered a puncture and some body damage following contact with a Ferrari in the very early laps, and then was slightly delayed by an air-jack issue during one of the pit stops. It finished 33rd.

The Blancpain Endurance Cup is back on 14-15 May, with another traditional rendez-vous, Silverstone, just one week after the second round of the Sprint Cup, at Brands Hatch.