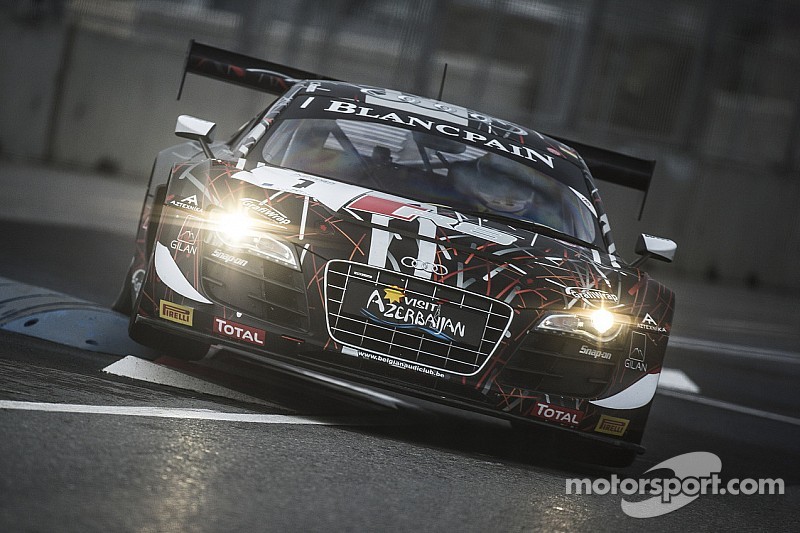 With four Qualifying Race wins, but none in a Main Race, Laurens Vanthoor and Cesar Ramos had a point to prove at the Baku World Challenge. Ramos managed to get off the line swiftly, beating Jonny Adam in the sprint to the first chicane and holding on to the lead during the whole first part of the season finale.

With the pitstop for the Aston Martin not exactly going according to plan, Laurens Vanthoor had a seven second lead after the pitstop and looked set for a relatively easy second part of the race.

However, that was not how Andy Soucek had read the script, and the Spanish Aston driver managed to get the gap under three seconds. Vanthoor stepped up his pace and the #1 Belgian Audi Club Team WRT Audi took its first Main Race win of the season, with the added bonus of a cheque of 100.000 euros reserved for the winners of the Baku World Challenge.

I am happy we have ended the season in style and with the experience we have now I am sure that Cesar and I could go for the title next year.

The fight for third proved to be almost as exciting, with Stephane Ortelli (#9 Belgian Audi Club Team WRT Audi) and Markus Winkelhock (#6 Phoenix Racing Audi) racing nose-to-tail around the Baku street circuit. Winkelhock eventually found his way past the Monegasque driver and together with teammate Niki Mayr-Melnhof scored their first podium finish of the season.

In Silver Cup Benjamin Hetherington and Miguel Toril confirmed their Qualifying Race win in the Main Race, with Marko Asmer and Alexey Vasiliev doing the same in Pro-Am Trophy, which brought them up to third overall in the Pro Am Blancpain Sprint Series standings..

Before the start of the Baku weekend it was clear that the Blancpain Sprint Series title would be decided between Maximilian Götz (#84 HTP Motorsport Mercedes) and the #28 Grasser Racing Team Lamborghini pairing of Jeroen Bleekemolen and Hari Proczyk. During the Qualifying Race the Dutch-Austrian duo looked set to keep their chances alive until the Main Race, running in second, while the Mercedes of Götz and Buhk was gradually losing positions due to a damaged rear wing.

However, with ten minutes to go, the front of the Lamborghini of Proczyk started to fall apart. The aluminium frame holding the front bumper had collapsed, and several body parts became detached. After being shown the black and orange flag, Proczyk had no choice but to come in for repairs, losing any hope of the 2014 title in the process. Maxi Götz managed to bring his damaged HTP Mercedes home in 9th, which was enough to claim the 2014 Blancpain Sprint Series drivers title, having claimed three Main Race wins this season.

The Baku World Challenge was also the final round of the inaugural Blancpain GT Series, combining the results of the Endurance and Sprint Series. In both the driver and team rankings the outcome was to be decided during the Main Race, with Maximilian Buhk and the Belgian Audi Club Team WRT going into the final race of the season as the respective Series leaders.
Both title fights would be as good as decided in the early stages of the race, when René Rast in the #2 Belgian Audi Club Team WRT Audi made contact with the #84 HTP Motorsport Mercedes of Maximilian Götz. Both cars hit the wall and had to retire. When the sole remaining HTP Motorsport car had to retire as well, the team title went to the Belgian Audi Club Team WRT, but Vanthoor still had to finish in the top two to claim the drivers’ crown as well. Despite pressure from Soucek, the Belgian had no problems in doing so and after winning the Total 24 Hours of Spa and the Blancpain Endurance Series, Vanthoor put another important feather on his cap.

In Baku the fight for the first Silver Cup title added some more spice to an already exciting event. Series leaders Vincent Abril and Mateusz Lisowski had a terrible start to the weekend, when the Frenchman crashed hard during qualifying. The Belgian Audi Club Team WRT crew did an excellent job in repairing the car overnight, but the French-Polish duo still had to finish in the Main Race to hold on to first place in the standings. With the #4 Audi R8 LMS ultra developing gearbox problems, Abril and Lisowski had to nurse their car home, finishing six laps down. It still was enough to claim the Silver Cup, after a season in which the duo took four Main Race wins.

With the Pro-Am Trophy freshly in their pockets – their win in Zolder gave them an unassailable lead – Marc Basseng and Alessandro Latif came to Baku with the determination to add one more choice performance to their tally. Sadly, it was not to be. Basseng hit the wall during qualifying and the #5 Phoenix Racing Audi was damaged beyond repair. However, with four main race wins to their names, Latif and Basseng were still the best Pro-Am duo of the season.

In the Blancpain Sprint Series, titles and race wins are not only rewarded by cups and trophies, but also by important prize money. Add to that the cheques of the Pitstop Challenge and it is clear that the Belgian Audi Club Team WRT proved to be the most successful outfit this season. Here is the total amount of prize money won by the teams this season:

Laurens Vanthoor (#1 Belgian Audi Club Team WRT Audi): ‘There was some pressure on my shoulders, especially after the unfortunate accident between Rast and Götz. I still had to get a good result and we wanted to win to claim the cheque, so it was not easy to find a way to go fast and not take any risks at the same time. This year we had five victories – unfortunately four of them came in Qualifying Races – and three pole positions. So we worked well, had a good team, but we also made some mistakes and were unlucky sometimes. I am happy we have ended the season in style and with the experience we have now I am sure that Cesar and I could go for the title next year. But with a win in Spa, the Blancpain Endurance Series title and the Blancpain GT Series title I cannot complain about this season.’

Andy Soucek (#107 Beechdean AMR Aston Martin): ‘There was a bit of a mix-up at the pit stop, when Jonny came in earlier than expected. We were not really ready and we lost some six, seven seconds. I could get closer to Laurens, but there was not much more I could do. Still, I am very happy with the way our Aston Martin performed, both in Zolder and Baku.’

Markus Winkelhock (#6 Phoenix Racing Audi): “I noticed that Stéphane was struggling with the brakes, just like I was. I tried to push him into making a mistake and when he missed the apex of the corner, I was able to get my car alongside. There was some oil on his side of the track, so I had the grip advantage and could pass him. I am very happy that we can end the season with a podium finish.”

Maximilian Götz (#84 HTP Motorsport Mercedes): “First of all I would like to thank my team, Maxi Buhk, my teammate for most of the season and Nico Verdonck, with whom I drove during one race weekend this year. This title is also theirs and without them I could not have won it. It was a pretty hectic qualifying race. When I saw the damage at the rear wing, I knew it would be difficult. Especially with the strong winds here, you need all the aero you can get. I lost a lot of time in the fast corners, but I managed to bring the car home in 9th and take the title.”

Benjamin Hetherington (#63 Fortec Mercedes): “I had a relatively easy race this afternoon, because Miguel did a perfect stint and the boys performed a great pitstop as well. I had a comfortable gap towards the guys behind us, so I only had to bring it home. It is quite rewarding to take this win, especially after the accident in qualifying. The boys did a fantastic job in repairing the car.”

Vincent Abril (#4 Belgian Audi Club Team WRT Audi): “It was not an easy weekend for us, after the crash during the qualifying session. Luckily we have an amazing team and our guys worked all night to repair the car. Since we did not have too many spare parts here the car was still difficult to drive, especially when the gearbox broke and we had to do most of the laps in third gear. We had a really great season and this title is a fitting reward.”

Alexey Vasiliev (#177 GT Russian Team Mercedes): “Our aim was to be at the finish and we succeeded in doing so. Next year we would love to drive in both Endurance and Sprint Series, because the GT Russian Team wants to drive on as many different tracks as possible.”

Alessandro Latif (#5 Phoenix Racing Audi): “I have made a lot of progress this year, gained a lot of experience. I would like to put that to good use next year, but what exactly I will do remains a question mark for now.”