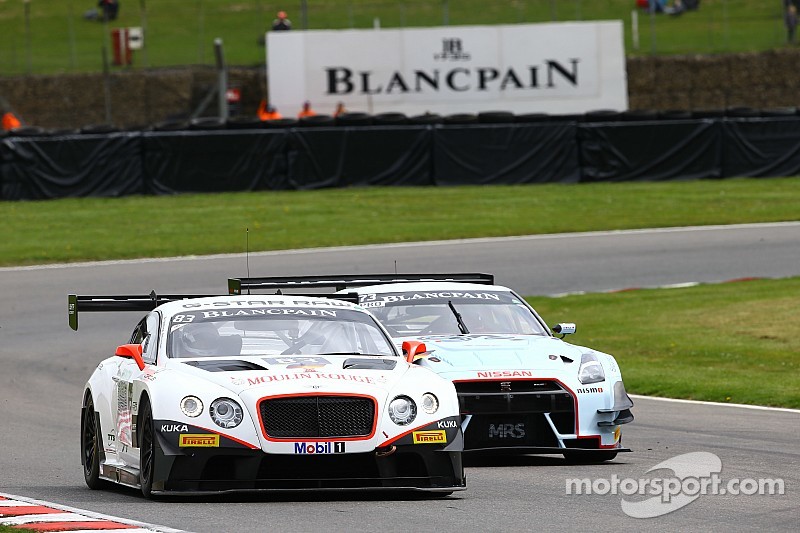 Second round of the Blancpain Sprint Series at Brands Hatch

Brands Hatch, United Kingdom - Bentley Team HTP returns from the second round of the Blancpain Sprint Series at Brands Hatch, England with two class victories. In the Qualifying Race and the Feature Race, Olivier Lombard (F) and Jules Szymkowiak (NL) took class victories in the Silver Cup reserved for young drivers in their Bentley Continental GT3. Maximilian Buhk (D) and Vincent Abril (F), who teamed up the second Bentley Team HTP Continental GT3, had to sit out both races after an incident during practise.

The double class victory of Lombard and Szymkowiak at the circuit located southeast of London was hard fought. During Qualifying Race, the two Bentley drivers battled for a top-10 position, when an Audi driver spun Lombard in the latter stages of the race. Lombard lost some positions due to this and finished 13th.

Our program with the Bentley came together quite late, so we still learn with every mile on the race track.

In the second race things didn’t go as planned, when Lombard spun on the opening lap and fell back to last position. The Frenchman immediately started a strong recovery, which took him and teammate Szymkowiak up to 12th position by the end of the one-hour sprint race.

Buhk and Abril had bad luck at Brands Hatch. After Buhk went off track in the first practise session, the car was badly damaged and couldn’t be repaired on site. As consequence, Buhk/Abril were sidelined for the remainder of the weekend.

"Olivier Lombard and Jules Szymkowiak showed a great performance and took two class wins in only their second weekend in this series“, Bentley Team HTP team principal Norbert Brückner said. "Our two junior drivers deserved a finish in the top-10, but unfortunately an unnecessary contact by a competitor prevented this. It was very disappointing that we could only compete with one car this weekend, as we certainly had the potential for a good result with Maximilian Buhk und Vincent Abril. The most important thing is that Maximilian Buhk is fine after his heavy impact.“

Jules Szymkowiak: “Each lap in the car is very important for me because Olivier and I still have to learn a lot about the car, plus we are also new to GT racing. Our program with the Bentley came together quite late, so we still learn with every mile on the race track. Today, I had a lot of confidence in the car and I had some great fights. Especially in door-to-door battles, I learned a lot this weekend and I see that we are on a very good path.“

Olivier Lombard: “An Audi spun me around during the Qualifying Race, which was extremely annoying because in the first round at Nogaro, contact in Qualifying Race prevented us from taking a good result. Unfortunately I span at the start of the main race. Apart from that I had a good race. My pace was good and I could gain five positions during my stint.“

Vanthoor against all, all against Vanthoor?