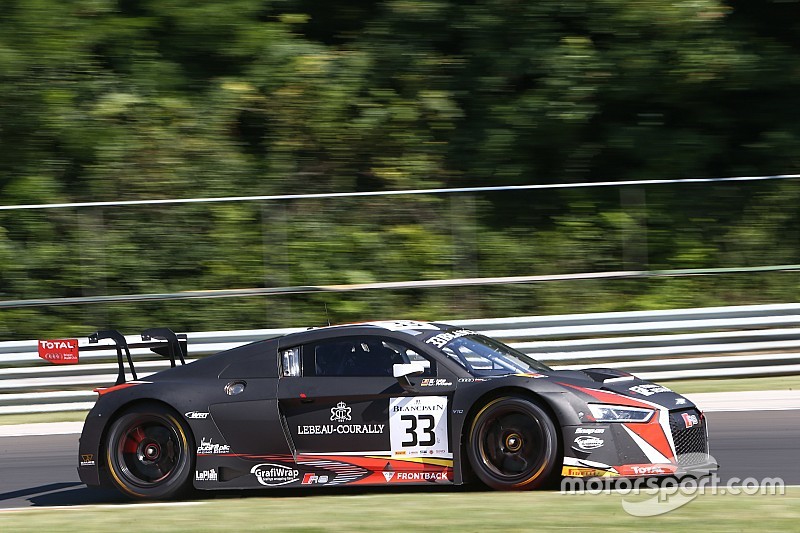 WRT Audi duo Christopher Mies and Enzo Ide triumphed in the Qualifying Race at the Hungaroring to take the Blancpain Sprint championship lead.

While Mies ran the first stint in second, a crucially quick pit stop by the team allowed Ide to take the lead and eventually win.

Qualifying pace-setter Rosenqvist led the field at the start, which was quickly followed by a lengthy full-course yellow stint.

The neutralization came after the Attempto Lamborghini of Daniel Zampieri and the Sainteloc Audi of Edward Sandstrom made contact at Turn 1 and the former car was stranded on track.

Rosenqvist, who led by three seconds during the full-course yellow, maintained the gap from Mies after the start, with Laurens Vanthoor quickly passing Dominik Baumann for third.

The reigning European Formula 3 champion's lead was still 2.4s when he came into the pits, only for his partner Tristian Vautier to fall back to second.

The #33 WRT Audi of Mies made a quicker stop a lap later, allowing Ide to rejoin in the lead, just ahead of Vautier and Frederic Vervisch, who took over from Vanthoor.

The trio continued to run within two seconds of each other with Vautier starting to put pressure on the leader at the 10-minute mark.

However, Ide did not make any mistakes and crossed the line in first to claim the victory and steal the points lead from Garage 59 McLaren pair Alvaro Parente and Rob Bell.

Starting from 21st, the latter team could only make up four positions during the race.

Vautier and Vervisch had to settle for second and third respectively with Baumann's teammate Maximilian Buhk closing in on the top three but settling for fourth.

The aforementioned duo's sister car at HTP, driven by Bernd Schneider and Jules Szymkowiak, was the best of the rest, bringing a third Mercedes into the top five.

Sainteloc's Christopher Haase and Mike Parisy, the highest-placed entry being warned due to track limits, finished sixth, the latter holding off the ISR machine of Frank Stippler and Filip Salaquarda.