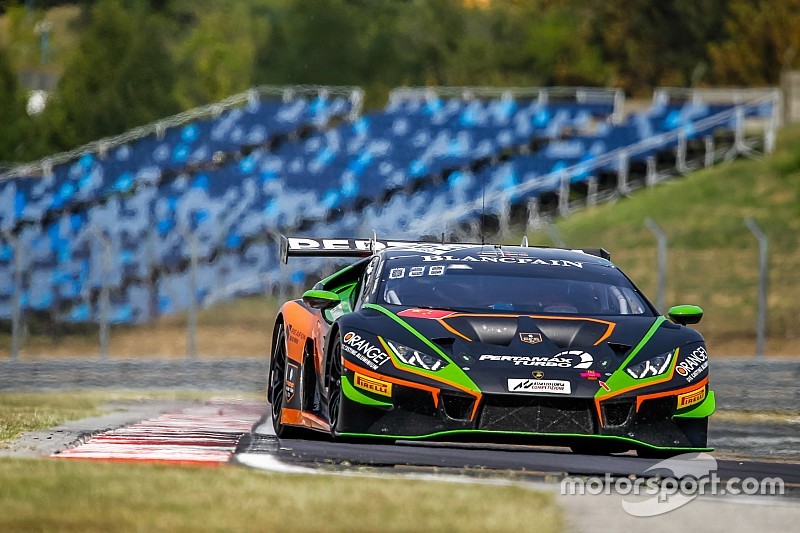 Caldarelli and Mapelli finished fourth in the #563 FFF Racing Lamborghini Huracan GT3, one place behind the Black Falcon Mercedes-AMG GT3 of Engel and Stolz, which was enough to win the title on countback.

While ASP Mercedes drivers Vincent Abril and Raffaele Marciello waltzed to another dominant win to the tune of 16 seconds, adding to their Saturday success, the destiny of the title battle hung in the balance behind them.

At first, it seemed Engel was doing enough to overturn the two-point deficit he and Stolz faced heading into the race by holding third in the early stages, with the points-leading Lamborghini of Caldarelli stuck down in 11th place.

However, Caldarelli soon started to make progress, climbing to eighth before diving into the pits early to hand over the #563 Lambo over to Mapelli, who enjoyed clear air for several laps.

The result was that Mapelli vaulted up to fourth in the order, while Engel waited an extra two laps to pit the #4 Mercedes and make way for Stolz, and remained third behind the dominant ASP Mercedes and the #63 Grasser Lamborghini of Mirko Bortolotti.

That meant Stolz had to pass Bortolotti to win the title, but the latter held firm in the car he shared with Christian Engelhart, as Mapelli brought the #563 machine home fourth just behind Stolz.

The result was both Caldarelli/Mapelli and Engel/Stolz ended the season on 92.5 points - meaning the Lamborghini duo clinched title honours by virtue of their two race wins this year, versus just one for the Mercedes drivers.

Victory for Abril and Marciello also lifted them ahead of Engelhart and Bortolotti into third in the standings.

Felipe Fraga and Timur Boguslavskiy finished fifth in their ASP Mercedes, the highest-placed Silver Cup entry, but the class title went to the sister car driven by Nico Bastian and Thomas Neubauer, who finished second in class and eighth overall.

The Pro-Am crown went the way of FFF Lamborghini pair Phil Keen and Hiroshi Hamaguchi, helped by an early crash for David Perel in the Rinaldi Racing Ferrari 488 GT3.