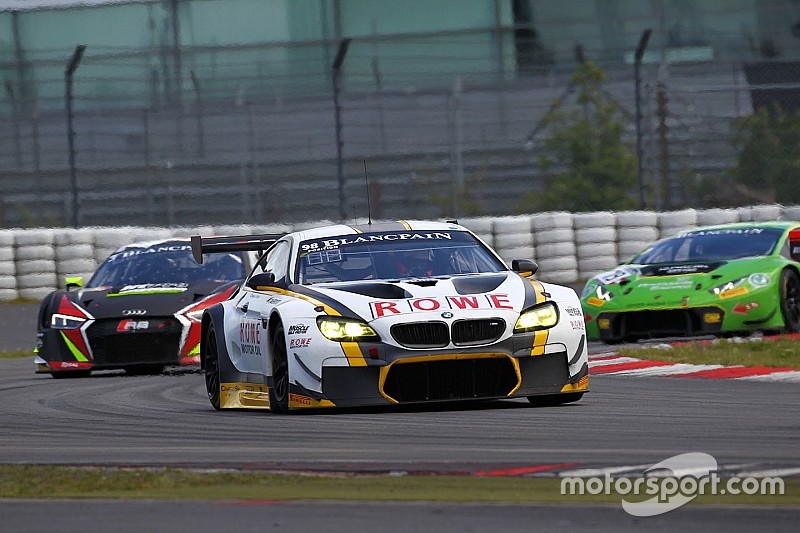 A bumper grid of 72 drivers and 36 GT3 cars comprising eight different manufacturers takes to the Hungaroring next weekend (August 26-28) for the penultimate round of 2016’s Blancpain GT Series Sprint Cup.

The championship’s one-hour Qualifying and Main Races, staged at Hungary’s 14-turn, 4.381km Formula 1 venue for the first time, could be crucial to deciding not only who scoops the various drivers’ and teams’ Sprint Cup titles but also the overall Blancpain GT Series crown, which tallies the results of all 10 Sprint and Endurance Cup meetings.

Last month’s Total 24 Hours of Spa, the Blancpain GT Series’ blue riband event, did not count towards the Sprint Cup points. However, it most certainly gave its winners a timely confidence boost heading into the summer break.

Alexander Sims and Philipp Eng had only scored one podium finish this year before triumphing in the Ardennes, but they will be hoping that victory acts as a springboard this weekend when the Rowe Racing BMW pair look to improve on their current seventh place in the Sprint Cup standings.

The men they and everyone else are chasing remain Rob Bell and Alvaro Parente whose consistency and victory at the previous Sprint Cup round in Germany aboard the Garage 59 McLaren 650S helped them to establish a slender three-point lead over WRT Audi duo Christopher Mies and Enzo Ide.

Bell will also have one eye on the overall Blancpain GT Series standings this weekend; the Briton currently enjoys a comfortable 35-point advantage over nearest rivals Maxi Buhk and Dominik Baumann. However, a good result for the HTP Motorsport Mercedes-AMG crew at the Hungaroring would also help them cut their 22-point deficit to Bell in the Sprint Cup title race.

Elsewhere, Michal Broniszewski and Giacomo Piccini’s five class wins from six starts has helped the Kessel Racing pair to establish a 26-point lead over Morgan Moullin Traffort and Jean-Luc Beaubelique in the Sprint Cup’s Pro-Am category. But with a maximum of 34 on offer this weekend - one for pole, eight for winning the Qualifying Race and another 25 for the Main Race - the chasing AKKA ASP crew remains very much in contention.

Things are a little more clear cut in the Am Cup where Claudio Sdanewitsch and Stéphane Lemeret can wrap up the Sprint Cup class title this weekend thanks to their 53-point lead over Christian Hook and Steve Parrow.

This weekend’s 36-strong entry features several changes to that of July’s Sprint Cup round in Germany. Stephen Earle and David Perel make their first short-format appearance of the season in their Am Cup-entered Kessel Racing Ferrari 488, while last season’s Blancpain Endurance Series championship-winning #23 Nissan GT-R will be driven by Lucas Ordonez and Mitsunori Takaboshi.

Alexander Sims, #99 Rowe Racing BMW M6 GT3: “It was very satisfying to win such a big race like Spa, especially as we did not expect it. But it has not changed BMW’s approach for the rest of the season, either. Honestly, we are taking every race as it comes and just trying to score solid points as and when the car and track allows. I am not sure the M6 will be particularly well suited to the Hungaroring given that it works best through fourth and fifth gear corners, and there are not many of those in Hungary. But, equally, we thought the same before racing at the Nürburgring last time out and achieved two top-10s there. Something similar would be great.”

Giacomo Piccini, #11 Kessel Racing Ferrari 488 GT3: “You never know what can happen in motor racing so we are definitely aiming to wrap up the Pro-Am drivers’ title in Hungary. It will be much easier if it is in our back pocket heading to Barcelona. I expect the Ferrari to be competitive, as it has been throughout the year, and we will be aiming to win. Both Michal and I love the car and team, which is probably why we have been so consistent and fast this season. Plus the Hungaroring is one of my favourite circuits; it is twisty and technical, but also very tough to overtake around. Qualifying is therefore really important as ideally we would like a few cars between ourselves and our class rivals.”