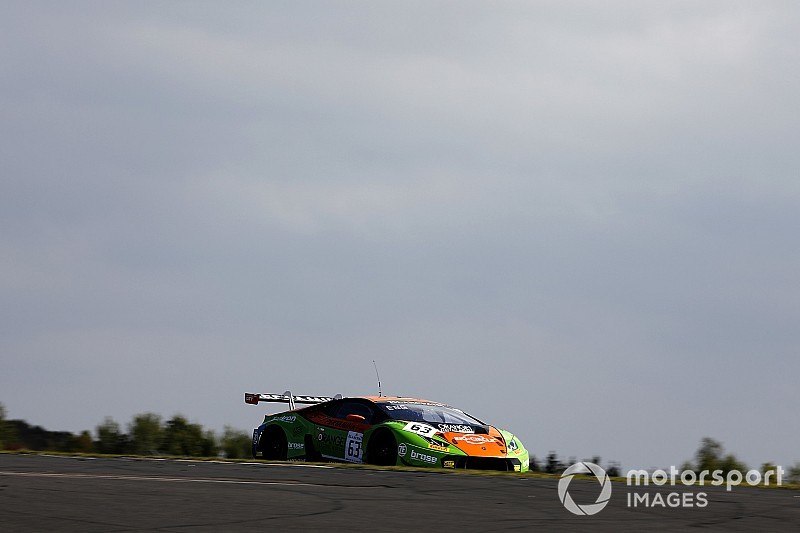 Grasser Lamborghini pair Mirko Bortolotti and Christian Engelhart scored their third Blancpain GT Series Sprint Cup victory of 2018 in the opening race of the weekend at the Nurburgring.

The #63 Lamborghini Huracan GT3 shared by Bortolotti and Engelhart started on pole and made a clean getaway to remain in front, and never came under pressure from the WRT Audi of Christopher Mies and Alex Riberas behind.

Mies crossed the line in second despite major repairs the #1 Audi underwent during the morning due to a crash in second qualifying, with a strong start from Riberas allowing him past the #14 Lexus of Albert Costa on the opening lap.

Costa fought back but could not quite make the pass stick and after the pitstop the #14 Lexus, now piloted by Christian Klien, dropped to sixth.

Third went to WRT Audi pair Will Stevens and Dries Vanthoor, with Vanthoor taking the place from Andrea Caldarelli's Lamborghini in the final stages of the race, and not without minor contact in the process.

The #19 Lamborghini of Caldarelli and Ezequiel Perez Companc had taken third from Jack Manchester, whose ASP Mercedes slotted into third after the pitstops before being passed.

ASP Mercedes duo of Michael Meadows and Raffaele Marciello made their way up to finish fifth after starting down in 10th, with blistering pace from Marciello in the second stint making up for Meadows’ slow start to the race.

By getting into the points the pair remain in second position in the Sprint Cup standings, sitting six points behind leaders Mies and Riberas with one race left to run on Sunday.