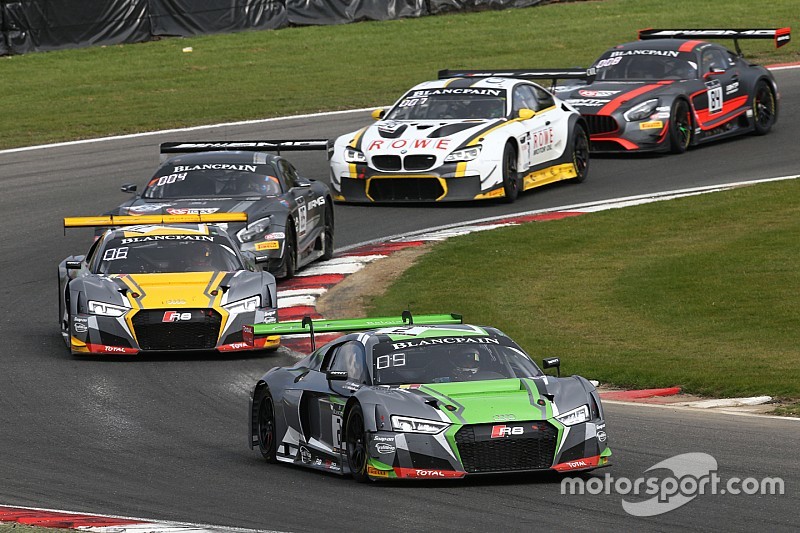 Team WRT Audi doubled up in the Blancpain Sprint round at Zolder as Markus Winkelhock and Will Stevens led an all-Audi top four the main race.

The duo finished third in Saturday's qualifying race, a position Winkelhock kept after the start of the main race despite starting behind slow-moving poleman Stuart Leonard.

The latter lost out significantly and was not only passed by fellow front row starter Michael Meadows, but also Clemens Schmid and Winkelhock.

However, Meadows was soon deemed to have jumped the start and was given a drive-through penalty, which was soon followed by another for a start procedure infringement caused by his AKKA ASP team.

While the one-time F1 racer couldn't get by, he was only two tenths behind when the duo pitted and a better stop from WRT allowed Stevens to comfortably rejoin in the lead.

With Schmid and Winkelhock building a lead of nearly 10 seconds over the chasing pack, the former's teammate Filip Salaquarda rejoined second ahead of Robin Frijns.

Stevens was unchallenged at the beginning of his stint and looked set to comfortably take the win, but the safety car was called when Daniel Juncadella sent Jimmy Eriksson into a spin at Jacky Ickx Bocht.

However, there was time for only one lap after the restart, and having the lapped Ferrari of Daniel Keilwitz between himself and Salaquarda allowed Stevens to seal the victory.

Salaquarda ran deep at Turn 1 as he passed Keilwitz, allowing Frijns to go side-by-side, but the Czech driver eventually held the Dutchman off to secure second.

Dries Vanthoor and Marcel Fassler came fourth in the second WRT Audi, the latter recovering from 13th on the grid to sixth before gaining two more places in the pits.

The #7 M-Sport Bentley of Steven Kane and Vincent Abril benefitted from the crash of Juncadella and Eriksson to be best of the rest in fifth.

Maximilian Buhk and Franck Perera took sixth in the HTP Mercedes ahead of the Attempto Lamborghini of Giovanni Venturini and Marco Mapelli, which lost three places in the pits.