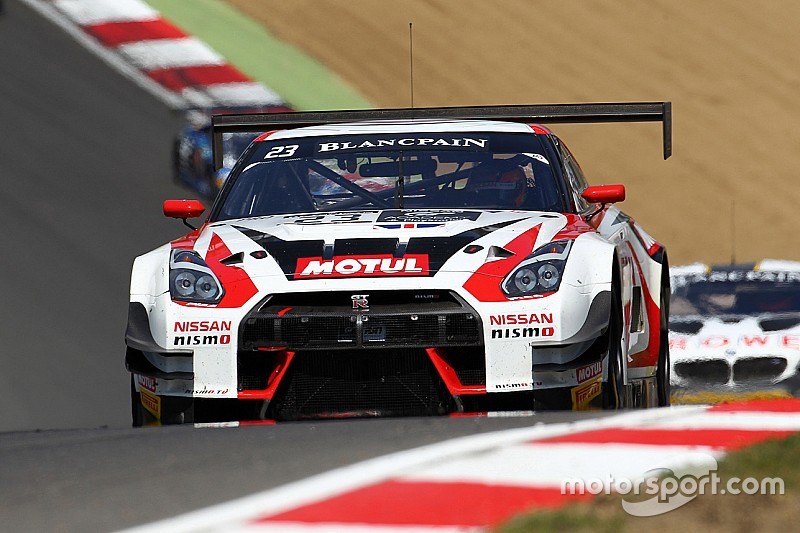 Brands Hatch, England – Nissan GT Academy Team RJN may not have been outright contenders at Brands Hatch this weekend in the Blancpain GT Series Sprint Cup but the team enters next weekend's Endurance Cup round at Silverstone in a confident frame of mind.

Neither Alex Buncombe or Sean Walkinshaw were able to get a clear lap in the second qualifying session, pushing the two Nissan GT-R NISMO GT3 machines back to 33rd and 34th on the grid.

The two races on Sunday were a different matter however. Mitsunori Takaboshi and Alex Buncombe gained 12 spots in the qualifying race to finish 21st while Sean Walkinshaw and GT Academy winner Ricardo Sanchez finished 31st.

More progress was made in the main race with the No.23 GT-R running as high as 15th before finishing 18th and the No.22 machine crossing the line in 22 - making up nine positions and finishing third in the Silver Cup.

"I was pretty pleased with the main race, the car felt really nice," Buncombe said.

"The guys made some changes on the car which made a big difference and we found about a second a lap in the main race. The goal was the top 20 and we just got there in the end.

"It was a shame because we were 15th and the safety car came out at the wrong time. The handy gap I had at the time disappeared with the safety car. When we went back to green I struggled for grip and got passed by a few cars."

"I was hoping we could repeat the great performance we showed in the Endurance Cup, but it turned out to be two tough races for the GT-Rs in the Sprint Cup," Takaboshi said.

"It is frustrating that the result is not what we expected and we didn't collect any points, but we found good car setup for the next races so I am feeling really positive."

Buncombe qualified on pole at Silverstone last year and the No.23 GT-R led the opening stint of the race before suffering contact with a back-marker just before the first pit stop which subsequently pushed them out of contention for the win.

The team's No.22 Pro-Am entry finished on the podium in second place.

"Overall I'm happy with the car after Brands Hatch and looking forward to next weekend at Silverstone," Buncombe said.

"That is our track - always has been - I'm hopeful it will be again next weekend."