After winning the qualifying race on Sunday morning Jeroen Bleekemolen and Hari Proczyk led the main race at the Brands Hatch meeting of the 2014 Blancpain Sprint Series from start to finish. 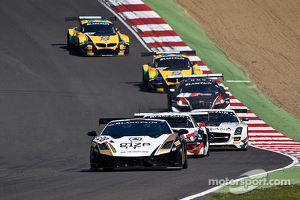 The #28 Grasser Racing Team Lamborghini crossed the line in front of the #84 HTP Motorsport Mercedes and the #0 BMW Sports Trophy Team Brasil, after the #30 BMW Sports Trophy Team Brasil BMW – running in second at the time – took a drive-through for a pit stop infringement. The win in Silver Cup went to the #4 Belgian Audi Club Team WRT Audi of Vincent Abril and Mateusz Lisowski, who took the lead of the class at the start and held it until the end of the race. Pro-Am honours went to the Audi duo Marc Basseng and Alessandro Latif.

Brilliant summer conditions greeted the Blancpain Sprint Series competitors for the main race at Brands Hatch. As if those high temperatures were not enough to get the blood pressure rising, the #28 Grasser Racing Team Lamborghini left it very late to leave the pitlane to take its place at the sharp end of the grid, when a problem with a wheel nut was solved just in time.

At the start Hari Proczyk managed to keep his first position, even though he was put under enormous pressure from Maximilian Buhk in the #84 HTP Motorsport Mercedes. Once the pack went incident-free through Paddock Hill Bend and Druids, the positions at the top became clear. Behind the Lamborghini and the Mercedes was the #30 BMW Sports Trophy Team Brasil BMW with Matheus Stumpf at the wheel. 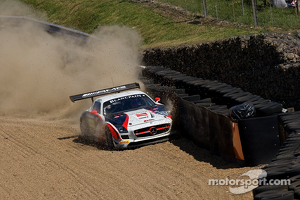 Team-mate Sergio Jimenez, in the #0 BMW had lost two positions and followed in fifth, behind Giorgio Pantano in the #60 Bhaitech McLaren. The Italian had managed to gain four places in the first lap, as did Vincent Abril in the #4 Belgian Audi Club Team WRT Audi, jumping from 12th to 8th and taking the lead in the Silver Cup in the process.

During the first half of the race the positions at the top did not change. The HTP Motorsport Mercedes decided to continue for two more laps after leader Proczyk had pitted, in an effort to gain the lead. But the pitstop for the Mercedes crew did not go as planned and when Maximilian Götz came out of pitlane, he slotted in behind Valdeno Brito at the wheel of the #30 BMW Sports Trophy Team Brasil BMW.

Jeroen Bleekemolen meanwhile had created a comfortable gap of almost five seconds and with the #84 HTP Motorsport Mercedes apparently unable to pass the #30 BMW it looked like the podium positions were distributed. The pitstop of the #30 had not gone completely according to the rules however, and Valdeno Brito was given a drive-through penalty, dropping him to eighth.

This promoted Maximilian Götz to second and Cacá Bueno in the #0 BMW Sports Trophy Team Brasil to third. That order remained unchanged, producing the same top-3 result as the qualifying race of Sunday morning. 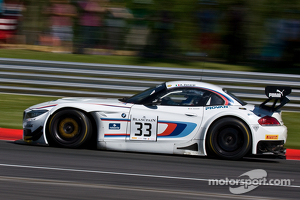 Behind them, Laurens Vanthoor crossed the line in fourth with the #1 Belgian Audi Club Team WRT Audi, but the loudest cheers of the appreciative crowd may well have been reserved for Alex Zanardi. The Italian, who won his three Paralympic medals at this track two years ago, had to start the main race from 17th after a mistake during the qualifying race, but a faultless and inspired drive resulted in fifth at the chequered flag.

Hari Proczyk (#28 Grasser Racing Team Lamborghini): “I have to thank the entire team for their efforts. If they had not managed to repair the broken wheel nut in the fifteen minutes before pitlane closed, we would have had to start the race from pitlane. We had only one or two seconds to spare, so that was not best way to try and focus for the start of the race! At the start, I was a bit surprised to see the SLS a bit in front of me, but it was fine in the end. Once I had the tyres up to temperature, I could apply the same tactics to keep Maxi Buhk behind me.”

Maximilian Götz (#84 HTP Motorsport Mercedes): “Of course it would have been nice to win here in Brands Hatch as well, but I think we can be happy with this result. We really enjoyed this weekend, had a good qualifying session and with our two second places today we are still leading the championship.”

Sergio Jimenez (#0 BMW Sports Trophy Team Brasil): “Four races, three podiums, those are magnificent numbers for our team. Every member of our team is Brazilian and some stay in Europe for 60 days, so this is their reward. We have won the pitstop challenge as well, even though our pit stop was not perfect. For now, it’s still difficult to fight for a win, but we are getting closer.”

Vincent Abril (#4 Belgian Audi Club Team WRT Audi, 1st Silver Cup): “This must have been one of my best starts ever. Beforehand I had discussed some possible tactics with the team and decided to have a go on the outside. It’s a good way not to be blocked on the inside, but also risky, because small contact can push you in the gravel trap, as our sister car experienced this morning. Thanks to the hard work of the team, our car has improved a lot during the course of the weekend and that gave us the means to get this result.”

Marc Basseng (#5 Phoenix Racing Audi, 1st Pro-Am): “Of course we are happy with our win in Pro-Am, but we would have liked to finish a bit higher up overall as well. Everybody who knows me knows that I cannot be happy with an 11th or 12th place. We have to work hard to improve the handling of the car, so I can give the car to Alessandro inside the top-5.”

Why Timur Boguslavskiy has added incentive in the Spa 24 Hours