Engelhart and Bortolotti win for Lamborghini at Brands 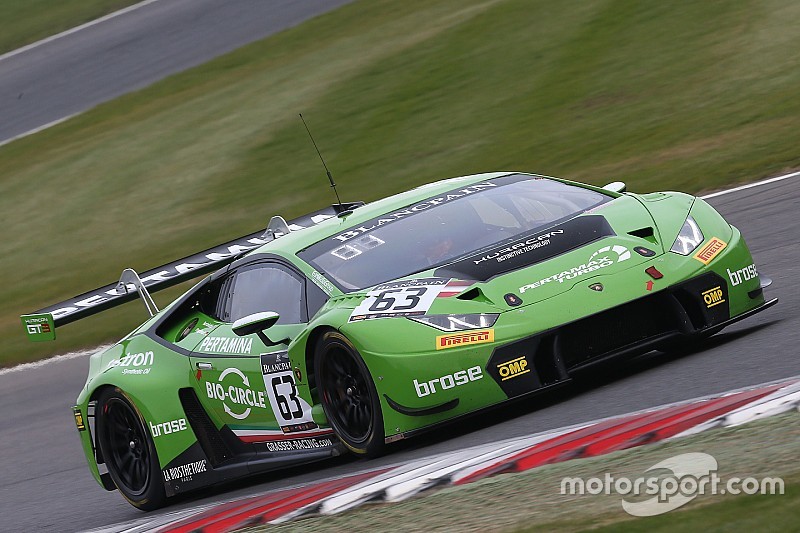 Having converted pole position to victory in the qualifying race, Engelhart carried on where he left off in the main event as Grasser teammate Ezequiel Perez Companc played tail-gunner and held up the pack.

Despite an early safety car to retrieve Clemens Schmid’s ISR Audi from the gravel at Stirlings that evaporated his early advantage, Engelhart had a 20-second lead when the pit window opened on lap 17, leaving Bortolotti with the simplest of tasks to bring the car home, 18.9 seconds ahead of the WRT Audi shared by Robin Frijns and Stuart Leonard.

It was Engelhart and Bortolotti’s third win of the season and their fourth from six Blancpain races as a driver pairing, including the Endurance Cup finale at the Nurburgring last year.

Having passed the ROWE Racing BMW of Markus Palttala at the first corner, Perez-Companc steadfastly defended second place from a train of cars headed by Felix Serralles in the AKKA-ASP Mercedes.

The Mercedes was due to inherit second after the stops as Norbert Siedler could not get the Lamborghini to restart, but a loose wheel from the M-Sport Bentley team forced Daniel Juncadella to swerve into the path of Philipp Eng’s BMW as he exited the pits, forcing the retirement of both cars.

Frijns and Leonard had run ninth before the pitstops, but typically slick pitwork from the WRT team raised them to third, before Frijns passed teammate Will Stevens at Druids on lap 23.

Stevens and Markus Winkelhock narrowly held onto the final podium position from the charging HTP Mercedes of Fabian Schiller and Jules Szymkowiak, which had started the qualifying race from the back of the grid after a team error in qualifying meant both drivers participated in the Q1 session.

A slow stop relegated Jesse Krohn and Palttala to fifth at the finish, with Dries Vanthoor and Marcel Fassler another to benefit from a fast WRT pitstop to finish sixth.

Misano double-winners Franck Perera and Maxi Buhk were the best-placed of the teams that were affected by punctures in the qualifying race in seventh.

Buhk had been running fifth in the qualifying race when suspected debris forced him to the pits with 10 minutes remaining and relegated him to 22nd.

The German launched a spirited comeback in the main race that was capped by co-driver Perera, to minimise the points deficit to new championship leaders Engelhart and Bortolotti.

The #7 Bentley driven by Steven Kane and Vincent Abril came into the weekend second in points but could only salvage 13th from the main race after a left-rear blowout for Kane at Paddock, while Christopher Mies and reigning Blancpain Sprint champion Enzo Ide were an equally disappointed 15th, following contact at the start with Christopher Haase’s Sainteloc Audi.

Sprint Cup round at Zolder: home race for the Team WRT and quite a few of its drivers