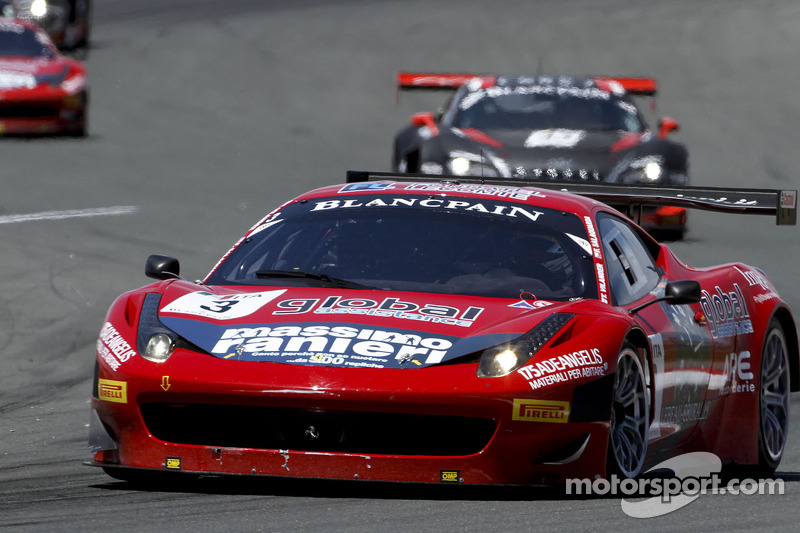 Filip Salaquarda and Toni Vilander produced an impressive performance in mixed conditions to give their AF Corse Ferrari team its first victory in the GT1 World Championship at the Slovakiaring today. Albert von Thurn und Taxis and Tomas Enge came home second, after a remarkable fighting drive by the latter driver in increasingly wet conditions.

The race started under the safety car due to a large amount concrete dust on the track, which had been used to soak up oil dropped around much of the circuit by the #8 Exim Bank Team China Porsche 911 on the way to the grid. There was also a temporary chicane installed before the Slovakiaring's famous jump, in an effort to stop any of the GT3 cars becoming airborne.

When the safety car withdrew, fast Finn Vilander in the #3 Ferrari 458 wasted no time improving on his fourth-place grid position. Second was his by the end of the pit straight, and he took the lead with a confident move down the inside of polesitter Stef Dusseldorp in the #1 HEXIS Racing McLaren shortly afterwards. Things didn't go so well for Francesco Castellaci in the sister Ferrari, who misjudged a move on Michael Bartels' Vita4One BMW and ended up in the gravel. Another off from his co-driver Enzo Ide later in the race kept them well out of contention.

Bartels had started the #18 car second, but the early laps saw him lose places to not only the charging Vilander, but also Oliver Jarvis in the #33 Team WRT Audi, Alvaro Parente in the #2 HEXIS McLaren and Marc Basseng in the #38 All-Inkl Mercedes, so the Vita4One team boss was now sixth overall. Meanwhile, Laurens Vanthoor in the #32 Audi took himself out of contention by running wide. Up front, Parente soon caught and passed both Jarvis' Audi R8 and his McLaren team-mate Dusseldop to take up second place behind Vilander.

Time spent under the safety car meant it was not long before the pit window opened, and Bartels was among the first in, handing the Z4 over to his quick Dutch co-driver Yelmer Buurman. Another man pitting early was Albert von Thurn und Taxis in the #24 Reiter Engineering Lamborghini. A problem with one of the Gallardo's wheels delayed co-driver Tomas Enge's return to the race, but this was not the last we'd hear from him. Unusually for GT1, there were no significant changes of order during the pit stops, but shortly after the cars re-joined, Buurman managed to get ahead of Parente's co-driver Demoustier in the #2 McLaren. He now lay third, behind Salaquarda in the leading Ferrari and Dusseldorp's very quick co-driver Fred Makowiecki in the #1 McLaren.

For a while, it looked as through the Frenchman would produce a typically clinical performance and hunt down Salaquarda for the win, but soon it became clear the MP4-12C didn't have the expected pace. Light rain that appeared early in the race was getting heavier now, yet it seems there were bigger issues than just a lack of grip, as the other McLaren had by now retired with smoke coming from the engine bay. Makowiecki would eventually limp across the line in ninth after losing many positions in the final stint.

Instead, the man to watch in the closing laps was Tomas Enge. Despite losing time in his pitstop, he was able to find more grip than anyone else on the damp track in slick tyres, and soon despatched with both Frank Stippler in the #33 Audi and Marcus Winkelhock in the #38 Mercedes to take fourth. He inherited third when Makowiecki hit trouble, and such was his relentless pace that he was battling for second with Buurman almost all the way around the final lap. The thrilling contest was eventually resolved in the Czech driver's favour, capping off a remarkable drive in a car that had started from 12th.

Mike Parisy salvaged fifth for the Exim Bank Team China team in the #7 car, after the #8 pulled in on the formation lap due to continuing mechanical problems. Neither of the Valmon Racing Team Russia Aston Martins started this race due to financial issues, and it was a nightmare event for Matteo Cressoni and Milos Pavlovic in the lone Sunred Ford GT, who had to start from the back of the grid due to a technical infringement after qualifying a very promising third.

Bartels and Buurman win championship race for BMW at Slovakiaring