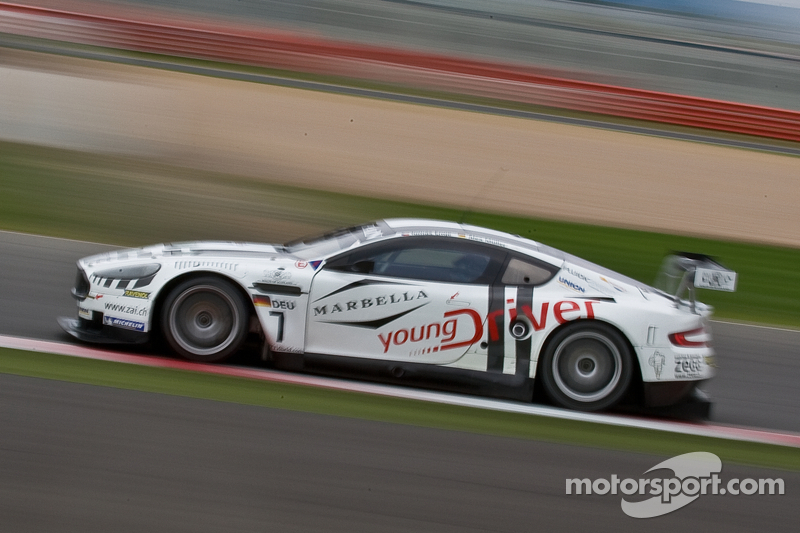 Final race of the GT1 World Championship in Argentina 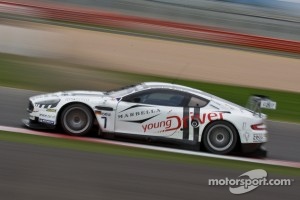 It’s been nine weeks now since Young Driver experienced their most successful weekend in team history with a double victory in the Qualifying and as well in the Championship Race in China. But success in the GT1 World Championship comes always along with success ballast. After claiming their first common victory in China, the Mücke/Turner-Aston Martin DBR9 is loaded with a 55kg weight penalty. But also the championship leading Nissan, which is nine points ahead of the Young Driver AMR-Aston Martin in the driver’s Championship, has to carry 30kg around the scenic circuit in Argentina, which is located around a volcanic lake. Alex Müller and Tomas Enge will start for the third time this season in a Aston Martin DBR9, which sports the iconic powder blue and orange colours of Gulf. The new livery brought Müller/Enge luck in China, at Beijing they won the for the second time this season a Qualifying Race. But also this success comes with 30kg success ballast at a track, which has showed last year, that it’s perfectly suited for the Aston Martin DBR9.

“Our main goal in Argentina is to have two trouble free races and get a good result”, Young Driver AMR team principal Hardy Fischer says. “We have a good amount of success ballast in both cars, therefore I will not yet think about winning any world championship title. Last year we claimed the Pole Position at San Luis and saw that the track is a perfect fit for us. But with this high amount of success ballast, this year everything is a bit different and very hard to judge. I wouldn’t be keen to make any predictions before the free practise at San Luis has finished. In the last weeks, we prepared ourselves in the best possible way and are now ready for the final battle of the season.”

Driver quotes before the race in Argentina:

Alex Müller (#7 Young Driver-Aston Martin DBR9): “We travel without any expectations and without any pressure to Argentina. From the last year, we know that we are very competitive in San Luis, but we also have 30kg ballast on board. In any way, we will try to get the most out of the two races and I’m quite optimistic that we can archive a good result. I expect the Nissan to be very strong in Argentina and I would be very happy if we can maintain the lead of Young Driver AMR in the team championship in the two races. My personal target to finish third in the driver’s championship. It would be the maximum if we could archive this.”

Tomáน Enge (#7 Young Driver-Aston Martin DBR9): “As always, the victory is my target. We know very well what we have and what we are capable of and with a bit of luck, we can archive this goal. We have to be very consequent and don’t think about our success ballast so much. I hope that we can reach the ultimate goal, which is winning the team’s world championship for Young Driver AMR. The team worked very hard since the last race and especially practised pit stops. The team is determined to reach this goal, so the drivers are. What brings a bit of uncertainty to the story might be the weather, there is a chance that it might be raining, which would change everything. The championship is this year a lot closer, when we travel to Argentina and nothing is decided yet. So I expect the races to be very tough. But you have to use your head in the final two races and you can never score points, if you make contact with somebody else.”

Stefan Mücke (#8 Young Driver-Aston Martin DBR9): “San Luis is one the most interesting and one of the most difficult tracks of the calendar and I’m really looking forward to that race. The tracks suits our car very well as we saw last year and we will make the most out of it. Any prediction for the weekend is very hard. I hope that even with our high ballast, we will be reasonable competitive, even if I think that we can’t run at the front. But we travel quite relaxed to Argentina, because being second in the championship, we are not the team which is under pressure, that are the others.”

Darren Turner (#8 Young Driver-Aston Martin DBR9): “San Luis is a fantastic track in a great location. It's a very good road course where there is no room for error due to the dust off line and the lack of run offs. I really enjoyed racing there in 2010 even though we didn't get the results we wanted. When it comes to the championship fight we are in a difficult position. The results in China put us back in the hunt but if you look at it realistically 50 kilos of ballast is going to make it very hard to get the results we need in Argentina. We have to go there fighting and that is exactly what we will do.”