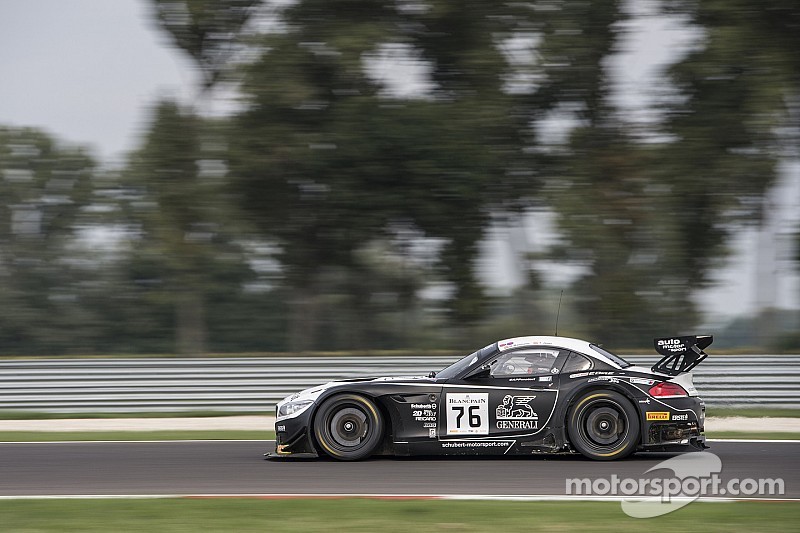 After a thrilling fight between BMW Sports Trophy Team Brasil and BMW Sports Trophy Team Schubert, it was the latter who took the win in the Main Race of the Blancpain Sprint Series at the Slovakiaring, their first of the Series. Dominik Baumann took the lead of the race in the penultimate lap, passing Sergio Jimenez in the Brazilian Z4 GT3, who was also aiming to score the first win of the Series for his team.

The fight for third was almost as exciting, with René Rast in the #2 Belgian Audi Club Team WRT Audi taking third in the final lap. The Silver Cup winners were Lucas Wolf and Luca Stolz in the #86 HTP Motorsport Mercedes, while Marc Basseng and Alessandro Latif in the #5 Phoenix Racing Audi took the win in the Pro-Am Trophy.

Winning from the last on the grid is just amazing.

Fluffy clouds greeted the drivers for the Main Race at the Slovakiaring, a welcome change from the torrential rain of Saturday’s Qualifying Race. But the start of the Main Race was still as eventful as the first lap the day before. With polesitter Cesar Ramos (#1 Belgian Audi Club Team WRT Audi) getting a slow getaway, the cars behind him went five wide into the first corner. Enzo Ide in the #2 Audi was pushed onto the grass and when the Belgian slid back onto the track, the domino effect pushed four cars into the gravel trap.

Hari Proczyk in the #28 Grasser Racing Team Lamborghini, together with Jeroen Bleekemolen second in the standings, was one of the drivers to abandon his car. Fabian Hamprecht in the #9 Belgian Audi Club Team WRT and Matheus Stumpf in the #30 BMW Sports Trophy Team Brazil were the two other drivers obliged to leave their cars in the gravel trap. Further down the opening lap, Niki Mayr-Melnhof hit the barriers at turn 9, retiring the #6 Phoenix Racing Audi.

When the dust settled, it was clear that Nico Verdonck and the #84 HTP Motorsport Mercedes and Cacà Bueno in the #0 BMW Sports Trophy Team Brasil had taken the best start, enjoying a three-second lead over the surprising Miguel Toril in the #63 Fortec Mercedes, a car that was 11th on the grid.

Toril was quickly overtaken by Lucas Wolf in the #86 HTP Motorsport Mercedes however, and a couple of laps later, Marc Basseng in the #5 Phoenix Racing Audi and Thomas Jäger in the #76 BMW Sports Trophy Team Schubert followed suit. Positions remained stable up until the mandatory pitstops, with Nico Verdonck pitting one lap before Cacá Bueno.

It was a great race, a great result. We think that in Portugal or any another race we can win now.

Series leader Maximilian Götz kept the #84 HTP Motorsport Mercedes in the lead for a while, but at the end of lap 17, the German made a slight mistake, allowing Sergio Jimenez to put the Brazilian BMW into the lead.

Jimenez was able to quickly create a gap and looked set for a relatively final quarter of the race, but behind him Dominik Baumann in the #76 BMW Sports Trophy Team Schubert BMW was lapping at a tremendous pace. Once Baumann got passed Götz, he thundered over the Slovakiaring, quickly closing the gap towards leader Jimenez.

With ten minutes to go, the two BMW were nose to tail, but Baumann found it difficult to launch a move on Jimenez. With three minutes to go however, the Team Schubert BMW tore by the yellow machine of Jimenez at Turn 6 and Baumann did not look back, heading for the first win for the BMW Sports Trophy Team Schubert BMW. René Rast in the #2 Belgian Audi Club Team WRT Audi took third in the final lap of the race overtaking Maximilian Götz in the #84 HTP Motorsport Mercedes.

In Silver Cup the #86 HTP Motorsport Mercedes of Lucas Wolf and Luca Stolz dominated the race, despite losing some time during the pitstop. Cup leaders Vincent Abril and Mateusz Lisowski had to take a drive-through penalty for a pitstop infringement with their #4 Belgian Audi Club Team WRT Audi, but still managed to finish in second in the Silver Cup.
In the Pro-Am Trophy the strong opening stint of Marc Basseng at the wheel of the #5 Phoenix Racing Audi laid the groundworks for an emphatic win, with Alessandro Latif crossing the line in 7th overall.

Dominique Baumann (#76 BMW Sports Trophy Team Schubert BMW): “The car was brilliant. I didn’t know the performance from the car, because we had a problem in Q1 and I wasn’t able to do a quick lap. But if you look at it now, we should never do a qualifying session. Winning from the last on the grid is just amazing. After the pitstop I saw the other cars were struggling a lot, especially in the second sector, and that is where I could make up time. I knew it would be risky to overtake the BMW, but when I did, it was amazing.”

Cacá Bueno (#0 BMW Sports Trophy Team Brasil): “We did not make the best of starts, everyone was getting a little crazy in turn 1. We had a very tough weekend, we qualified 21st, more than two seconds behind pole position. We changed the engine and started from pitlane for the Qualifying Race. Our car is not the best one, but it’s fast enough. It was a great race, a great result. We think that in Portugal or any another race we can win now.”

René Rast (#2 Belgian Audi Club Team WRT Audi): “Before I jumped in the car, I didn’t think we would end up in the top-5. We had a little bit of an advantage, since we had new tyres that we didn’t use in qualifying. I pushed right away, I closed the gap and I could overtake two or three cars. In the final lap, the Mercedes was just in front of me, sliding sideways. He tried to defend a position, I tried to gain a position, we were both on the limit. There was a bit of a contact, when I overtook, but it was just normal racing. We can be very happy, this is good for the championship."

Marc Basseng (#5 Phoenix Racing Audi): “It was really difficult in the beginning. In turn 1, there were a lot of cars around me and I braked quite late. I saw at the right side that the cars started to slide. I waited a little bit and I saw the hole and missed car number 9 by next to nothing. Luckily I went through and I could overtake in turn 3. I was pushing very hard to get the pace back after that, and that worked.”

Lucas Wolf (#86 HTP Motorsport Mercedes): “I don’t know what happened at the start, I was behind the Audi and than everybody passed to the left side. I stayed on the right and after the first corner I was in the front of the race behind the Fortec, which I could overtake a bit later. The car was great. Yesterday we had an accident in the rain, today we made a good pitstop and the car worked really well. I am happy to sit here and I am looking forward for the next race to be here again.”