Four podium finishes for the Team WRT at Budapest 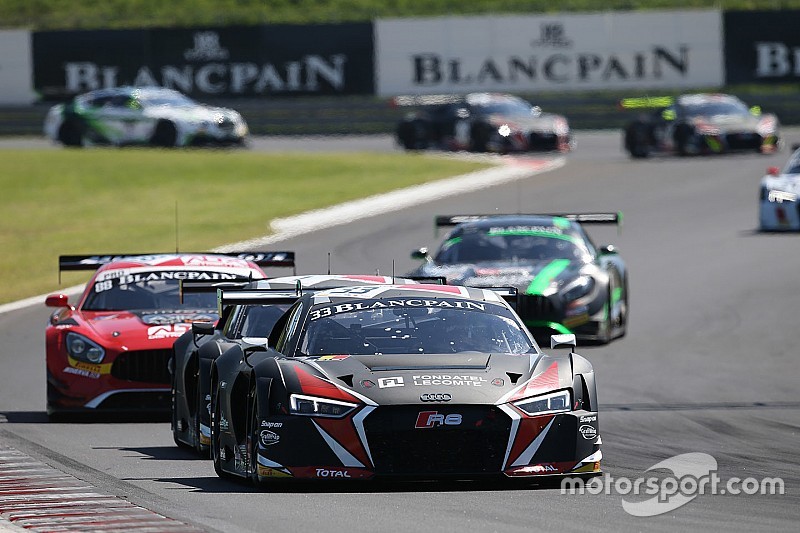 The Belgian Audi Club Team WRT had an excellent weekend at the Hungaroring near Budapest in the penultimate round of the Blancpain GT Series’ Sprint Cup. Four podium finishes was the harvest of the Belgian squad, which saw all its six cars classified in both races. The best-placed duo in the sprint Cup, Enzo Ide-Christopher Mies retook the lead in the Drivers’ standings, after clinching victory in the Qualifying Race (it’s their third success of the season) and finishing second in the Main Race, where will Stevens-René Rast were third. Laurens Vanthoor-Fred Vervisch took that same spot in the Qualifying Race and did actually came in second in the Main Race, before dropping to P8 after a post-race penalty.

Team Principal Vincent Vosse was a happy man at the end of the weekend: “We put on a very strong team result, which is what we were looking for. We go away with one win, three other podium finishes, all cars classified in both races and very heavy points. On top, three of our cars were the best Audis on track this weekend, and we again take the Pit Stop Challenge. It’s really a good weekend and I congratulate everybody for their excellent work. We are now in a very good position in the Sprint Cup championship and ready to go for it at the last round.”

In the heat of the Hungaroring, the Audis R8 LMS proved competitive since scratch, with four of the six Belgian Audi Club Team WRT cars in the top six in free practice 1, with Frijns and Meadows leading the pack. In free practice 2, it was again one of the team’s cars, this time with Mies, topping the time sheets.

The good performance was repeated in qualifying, although the pole position escaped by very little to Christopher Mies, second by only 0.070 seconds. Laurens Vanthoor took the 4th spot, in row 2, with Frijns in P8 and also cars #2 and #3 making it to Q3. Only car #28 of Rast-Stevensendured a more difficult qualifying, taking P23 on the grid.

The Main race, again with very warm weather, had a lively start, with a great fight between the leading Mercedes and the Audis of Ide, Vervisch and Rast. A relatively long full course yellow calmed things down, with the race resuming by the middle of the first stint. Behind the leading Mercedes, Vervisch had taken second from Ide, with Rast in 7th, Dries Vanthoor in 8th, and Baptista (11th) and Leonard (12th) not far. After all driver changes, the HTP Mercedes was still in the lead, but followed very closely (0.6 seconds) by Laurens Vanthoor, Mies and Stevens. Despite the efforts of the Belgian Audi Club Team WRT drivers, the gap increased to over 3 seconds towards the end of the race, with Laurens, Christopher and Will crossing the line right behind the winners. Unfortunately for Vanthoor and Vervisch, they were inflicted a 30-second penalty after the race for unsafe release, dropping to P8, right behind Frijns, who had climbed back to P8, while Meadows concluded 11th, just out the points. Jimenez, who was right before him, unfortunately had to pit three laps from the end, with a broken wheel as the result of a contact.

The last round of the Sprint Cup will take place in Barcelona on 1st-2nd October. Before that, the Endurance Cup will come to an end on 17-18 September, at the Nürburgring.

Provisional Drivers’ standings (Pro Cup) after Round 4 of 5:

Provisional Teams’ standings (Pro Cup) after Round 4 of 5: