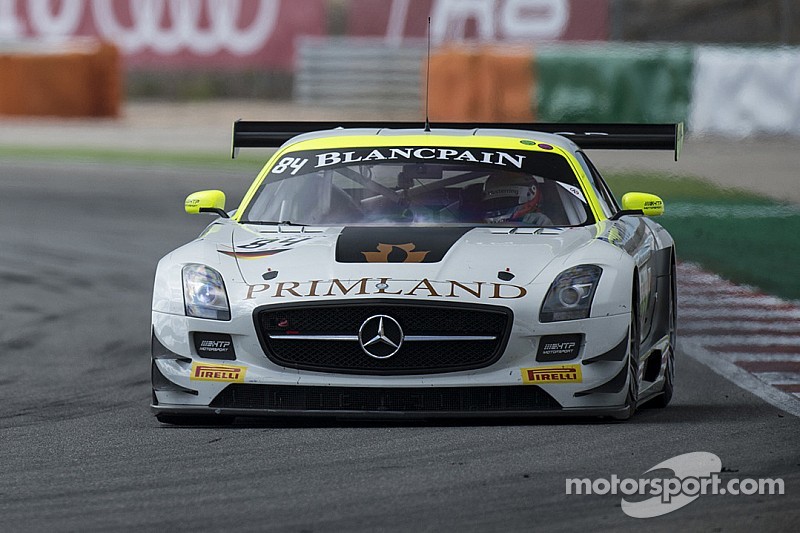 Their team-mates Mateusz Lisowski and Vincent Abril scored another win in the Silver Cup, while Phoenix Racing-pairing Alessandro Latif and Marc Basseng secured the 2014 Pro-Am Trophy title by taking their fourth win of the season.

Zolder reserved another glorious sunny day for the penultimate Main Race of the 2014 Blancpain Sprint Series. The hot conditions were to play an important role in the final part of the race, but the start turned out to be a pretty hectic affair as well. Maxi Buhk started from sixth, but was clearly determined to gain as many places as possible in the first couple of corners.

In the second corner I was like a sausage in a sandwich, between two other cars...

That resulted in him being squeezed going into turn 2, but the German managed to escape unscathed from the contact and took fourth position, behind the two Lamborghinis of Peter Kox and Hari Proczyk, who had beaten polesitter Cesar Ramos in the sprint towards the first corner, relegating the Brazilian Audi-driver to third.

The first part of the race saw two Safety Car-interventions, the second when Alexey Vasiliev made contact with the wall at the chicane, heavily damaging his Mercedes SLS AMG. The Russian driver was unhurt though.

Just before the pit window opened, the lights went back to green, and after 25 minutes of racing Proczyk was one of the first drivers to take his mandatory pitstop. One lap later leader Peter Kox drove into the pitlane, but the hydraulic jack on the #95 NSC Motorsports/Syntix Lamborghini failed and the Belgian Lamborghini had to retire.

It is difficult to overtake here, and I could not stay too close to the Mercedes, because my car would overheat.

Maxi Buhk continued for two laps longer and the time spent running in clean air turned out to be very advantageous for the Mercedes driver. When team-mate Maxi Götz took over the wheel of the HTP Mercedes, after a very quick pitstop, he managed to leave the pit lane just in front of leader Jeroen Bleekemolen in the #28 Grasser Racing Team Lamborghini.

Although the Dutchman tried his utmost best to pass the Mercedes immediately, Götz held on to the lead and even managed to open up a gap of two seconds. Bleekemolen was unable to mount another assault on the lead and had to follow his rival in the title race to the chequered flag. Just like Bleekemolen’s Lamborghini, Vanthoor’s Audi was overheating when running too close to the car in front, so the Belgian had to settle for third in his home race.

This third main race win of the season gives Maxi Götz now a 27-point lead over Bleekemolen and Proczyk in the standings, with 34 points up for grabs at the final round in Baku. The Grasser Racing-duo are now the only drivers that can deny Götz the 2014 driver title, since Enzo Ide retired the #2 Belgian Audi Club Team WRT Audi in the opening lap of the Zolder race, scoring no points for himself and team-mate René Rast.

In the Silver Cup the #4 Belgian Audi Club Team WRT Audi was in the hands of Vincent Abril at the start and the young Frenchman lost some time by avoiding contact in the melee during the opening corners. However, title rival Stefano Colombo fared worse however and had to rejoin the pitlane after a couple of laps. A lengthy pitstop cost the #34 ROAL Motorsport BMW ten laps, but in the end it was still classified and scored important points.

Abril had taken the fight for the Silver Cup win to the #86 HTP Motorsport Mercedes meanwhile, taking the lead at the pitstop. Mateusz Lisowski managed to hold off Luca Stolz, scoring their fourth win of the season. That means that the Polish-French Audi-pairing travels to Baku with a healthy 24 points in hand.

The race in the Pro-Am Trophy was effectively ended when Alexey Vasiliev crashed out of the race after 15 minutes of racing, handing the win to Alessandro Latif and Marc Basseng. The Phoenix Racing-duo is now certain of the 2014 Pro-Am Trophy driver title, with the German team taking the Pro-Am Trophy team title.

Maximilian Buhk (#84 HTP Motorsport Mercedes): “In the second corner I was like a sausage in a sandwich, between two other cars. I had no place to go. But I managed to hold on to fourth. The fact that we continued for three more laps before the pitstop played a part in us taking the lead, but the fast changeover was important as well.”

Jeroen Bleekemolen (#28 Grasser Racing Team Lamborghini): “We were a bit unfortunate at the pitstop, because when Hari wanted to come in, he had to brake hard behind Peter Kox, who continued and slowed down to take the chicane. That lost second probably cost us the lead. I tried to overtake Maxi in the first couple of corners after his pitstop, but he found a lot of pace quite soon. It is difficult to overtake here, and I could not stay too close to the Mercedes, because my car would overheat. 27 points is big gap to close in Baku, for sure. I think we will focus on trying to win the race, because there is really nice cheque to pick up for the winners.”

Laurens Vanthoor (#1 Belgian Audi Club Team WRT Audi): “It’s getting a bit frustrating. This is the third or fourth weekend that we dominate on Friday and Saturday, but on Sunday – when it counts – we’re not doing it. It’s hard, but we have to improve, especially at the start. We always have to take massive risks in the first corner, to gain back the time we lost on the straight.”

Vincent Abril (#4 Belgian Audi Club Team WRT Audi, 1st Silver Cup): “We need four more points to grab the title, so we try to score those in the Qualifying Race in Baku, to start the Main Race without pressure. Here it was a bit difficult, because there is still some room for improvement on the car. But we got the win, and that’s the important thing.”

Marc Basseng (#5 Phoenix Racing Audi, 1st Pro-Am Trophy): “The car was better than yesterday, but not good enough to really attack. But we did enough to win the Pro-Am Trophy title and I am very proud of this. For Baku we have nothing to lose now, so we can go full attack there.”

Alessandro Zanardi pleased with his qualifying race at Zolder