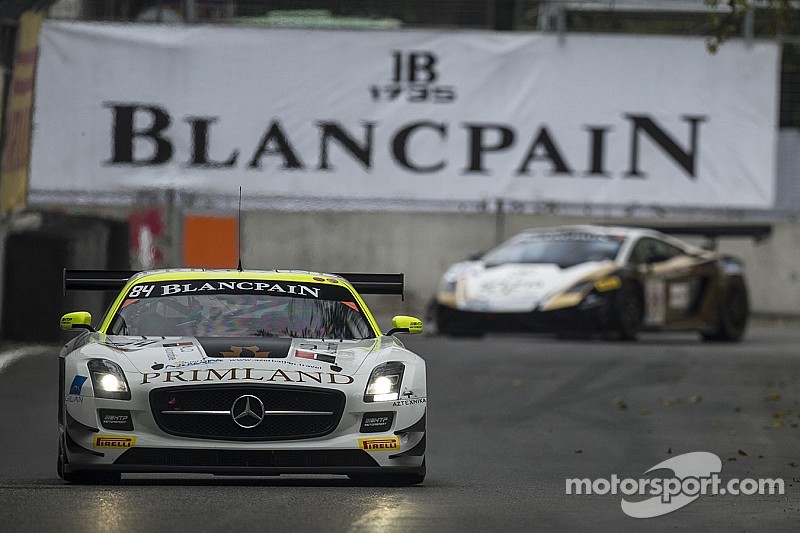 After an eventful Qualifying Race for the final event of the 2014 Blancpain Sprint Series Maximilian Götz (#84 HTP Motorsport Mercedes) was crowned the new Series champion.

A ninth place at the finish proved to be enough for the 28-year-old German, as the Lamborghini of his sole remaining contenders Hari Proczyk and Jeroen Bleekemolen fell victim to the high demands of the tough Baku street circuit. Götz’s teammate, Maximilian Buhk, saw his lead in the overall Blancpain GT Series standings dwindle to 15 points, as Laurens Vanthoor took his fourth Qualifying Race win of the year, together with teammate Cesar Ramos.

The street circuit for the Baku World Challenge has a reputation for being hard on the cars and that was confirmed during the Qualifying Race. The first lap saw several incidents, the collision between the #888 Triple Eight Racing BMW, the #85 HTP Motorsport Mercedes and the #76 BMW Sports Trophy Team Schubert BMW being the most important.

The pressure is gone for the main race, but I will try to get as much to the front as possible, because Maxi Buhk can still become the overall GT Series champion.

This caused a 15 minute safety car intervention, after which polesitter Stéphane Ortelli tried to increase his lead. At the same time Maxi Buhk hit the concrete wall at the exit of turn 7, severely damaging the rear wing of his HTP Mercedes.

After the pitstops, the #28 Grasser Racing Team Lamborghini of Hari Proczyk was briefly leading the race, but Cesar Ramos in the #1 Belgian Audi Club Team WRT Audi was soon able to overtake the Lamborghini and create a four-second gap. Stephane Richelmi, Ortelli’s teammate, had dropped to 4th at that stage of the race, after a messy pitstop.

It looked like the order would remain unchanged until the chequered flag, but ten minutes from the end, the front of the Lamborghini of Proczyk started to fall apart. The aluminium frame holding the front bumper had collapsed, and several body parts became detached. After being shown the black and orange flag, Proczyk had no choice but to come in for repairs, losing any chance on the 2014 title in the process.

The Silver Cup win went to the #63 Fortec Mercedes of Miguel Toril and Benjamin Hetherington after the #86 HTP Motorsport Mercedes of Wolf and Stolz hit brake problems in the final stages of the race. In Pro-Am Trophy the #5 Phoenix Racing Audi of Basseng and Latif was unable to make it to the start of the race – the car was damaged beyond repairs in yesterday’s qualifying session – so Alexey Vasilyev and Marko Asmer took the win.

Maximilian Götz (#84 HTP Motorsport Mercedes): “I still can’t grasp what happened during the last hour. First of all I would like to thank my team, Maxi Buhk, my teammate for most of the season and Nico Verdonck, with whom I drove during one race weekend this year. This title is also theirs and without them I could not have won it. It was a pretty hectic race. When I saw the damage to the car, I knew it would be difficult. Especially with the strong winds here, you need all the aero you can get. I lost a lot of time in the fast corners, but I managed to bring the car home in 9th. The pressure is gone for the main race, but I will try to get as much to the front as possible, because Maxi Buhk can still become the overall GT Series champion.”

Jeroen Bleekemolen (#28 Grasser Racing Team Lamborghini): “I would like to congratulate Maxi on winning the title, he really deserves it. He and his team have had a strong season and were always there when it mattered. It’s a pity that we lost our last shot at the title in this manner, but our Lambo is one of the lighter cars of the field and we had to pay the price for the constant taking of kerbstones. Driving around them was no option though, that would have made it impossible to attack during the race.”

Laurens Vanthoor (#1 Belgian Audi Club Team WRT Audi): “I was not really thinking about the overall title at the start of the race. I try to be realistic and I knew a 23-point gap would be difficult to close. We are in a good position now to win the Main Race as well, but it is out of our hands. If they manage to get to the front, we will be unable to make up the 15 points that separate us from the overall title.”