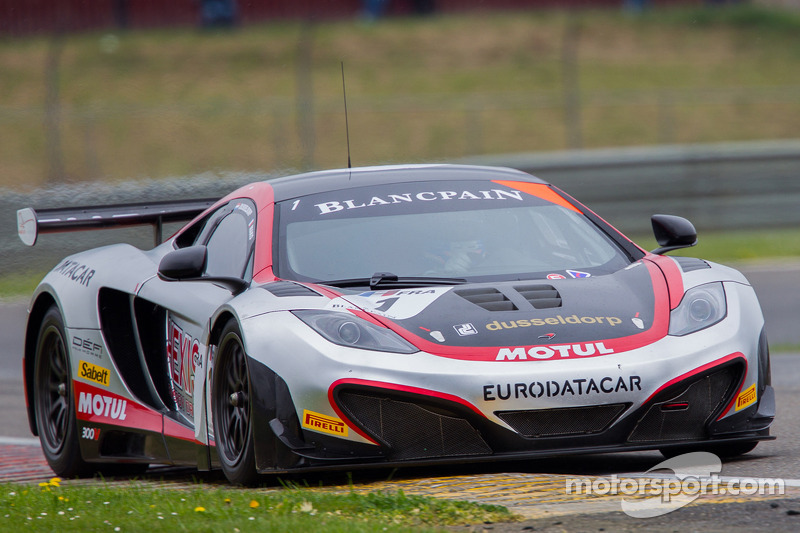 McLaren’s recent dominance of the championship continued in an entertaining Qualifying session in Slovakia.

Frederic Makowiecki (FRA) and Stef Dusseldorp (NLD) in the No.1 Hexis Racing McLaren MP4-12C, the winners of the Championship Race in the previous round in Spain, took pole position with a best lap of 2:01.652.

Second was the No.18 Vita4One Racing BMW of Yelmer Buurman (NLD) and Michael Bartels (DEU) with 2:01.934. Buurman had held the pole position but in the closing stages was pipped after a stunning last-gasp last lap from Makowiecki.

Third place went to a resurgent Sunred Ford GT No.10 of Milos Pavlovic (SRB) and Matteo Cressoni (ITA) with a time of 2:02.262 – their best position of the season. The Ford has been on the pace from the first session in Slovakia and looms as a strong challenger for race honours.

The casualty of Q1 was the Exim Bank Team Porsche No.8 of Benjamin Lariche (FRA) and Andreas Zuber (AUT) after it was beached in the gravel at T9 midway through the first period. The second Porsche No.9 of Mike Parisy (FRA) and Matt Halliday (NZL) sustained damaged when the Frenchman put the car in the barrier at Turn 9.

Q2 was red-flagged momentarily while rear bodywork from the Reiter Engineering Lamborghini No.25 was recovered from Turn 1.

Stephane Ortelli (MON) also made a high-speed exit of T9 in the No.32 Belgian Audi Club Team WRT Audi R8 LMS. He was lucky to keep it out of the barriers as he took a wild ride sideways across the track from one side to the other. GT1TV commentator John Watson described it as a “scary ride”.

Apart from picking up a load of gravel, the car was undamaged. Ortelli and team-mate Laurens Vanthoor (BEL) will start 8th. The second Audi of Oliver Jarvis (GBR) and Frank Stippler (DEU) will start fourth, just ahead of the two AF Corse Ferraris.

Both of the ALL-INKL.COM Münnich Motorsport Mercedes SLS AMGs had off-track excursions in the quest for a top qualifying position.

What the drivers say …

“The car’s getting better and better, we did some perfect laps, without mistakes. It wasn’t easy for sure, and a lot of people went off, leaving some debris on the track, which makes it harder.

“It will be difficult to win the Qualifying Race because the BMW and the Ford are both quick. This is a hard track where people will go off, and you have to look after the tyres.”

“Starting on the front row is always an advantage, it will be a hard race as the McLaren is very strong. I think after Navarra, we saw the improvements they have made with the car.

“I think we can be quite happy after missing a lot of the sessions yesterday, and at this circuit it is important to have as many laps as possible to find your rhythm and build up your confidence in the corners.

“I think we have a good pace, the car is well balanced and well set up, we will have to see how the tyres play into the result.”

“It is a good achievement for the team. When you look at how we started the season four races ago, nobody would think that we would make it into Q2, so I am very happy to here, and in P3.

“To me it feels a little bit like home here, Slovakia is not so far away from where I come from in Serbia and I am very happy to be doing so well here. I am taking it one lap at a time, you can not do anything more than that.”

“We were pushing like hell with both cars, we were way over the limit, but we just didn’t have the pace. We will see for the race. If we can be consistent and do a good pit stop maybe we can get a good result.”

“We were expecting to make it to Q3 given that yesterday we were quite quick.

“But my qualifying was just not good enough today. I made a mistake on new tyres and then we got caught out by the red flag so not a good at all. We just have to hope we can turn it round for the race.”