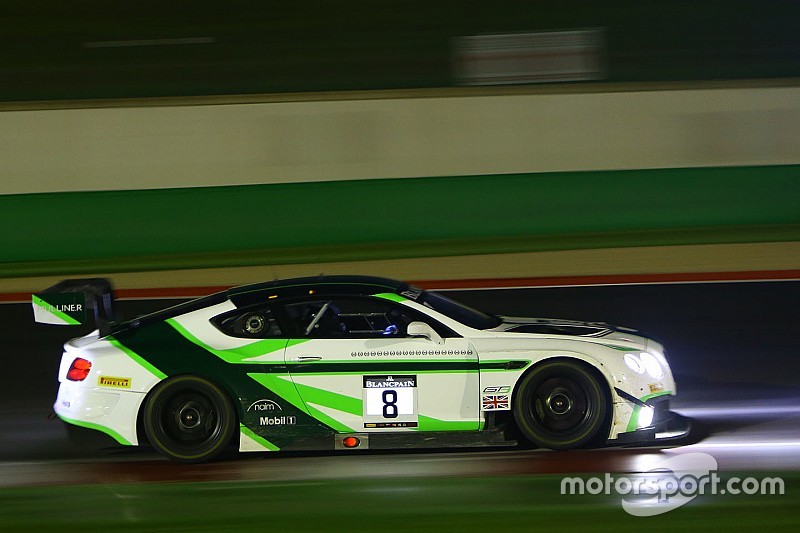 Bentley M-Sport drivers Andy Soucek and Maxime Soulet were victorious in the Qualifying Race of the Blancpain Sprint Series season opener at a damp Misano.

Ninth on the grid, the duo inherited a massive lead of 27 seconds after their pit stop thanks to a well-timed full-course yellow.

While pole-sitter Laurens Vanthoor maintained the lead lead with ease after the start of the race, fellow front-row starter Alvaro Parente could only hold on to second for two laps before surrendering to Robin Frijns.

The Dutchman forced his way through at the penultimate turn and Parente quickly dropped out of the top 10 afterwards.

Once second, Frijns started to make up some ground on the leader but soon enough he had to switch his attention to the challengers behind - the Ferrari of Norbert Siedler and the Mercedes of Maximilian Buhk.

Siedler running wide allowed Buhk to go through and the reigning Blancpain Sprint champion overtook Frijns as well after several laps of dueling.

The Audi driver fell behind Siedler soon afterwards, just before the beginning of the mandatory pit stops.

Delaying their mandatory stops, Soucek and Alexander Sims took over in the lead of the race.

Although they were only supposed to lead until the driver change, a full-course yellow was announced due to debris on track just as the duo entered the pits.

That allowed their replacements Soulet and Phillipp Eng to rejoin in first and second, 27 seconds in the clear.

Eng quickly closed the gap to just a second after the restart but the race was again neutralised following the crash of WRT's Silver Cup entrant Stuart Leonard, who was taken out by Alex Buncombe at Turn 1.

2015 Porsche Supercup champion Eng was all over Soulet once the race was back to green but he failed to get ahead of the race leader, eventually losing a couple of seconds in traffic and settling for second.

Frederic Vervisch, driving the WRT car that led early on at the hands of Vanthoor, ended up as best of the rest in third.

Mirko Bortolotti is ready for the new season starting at Misano