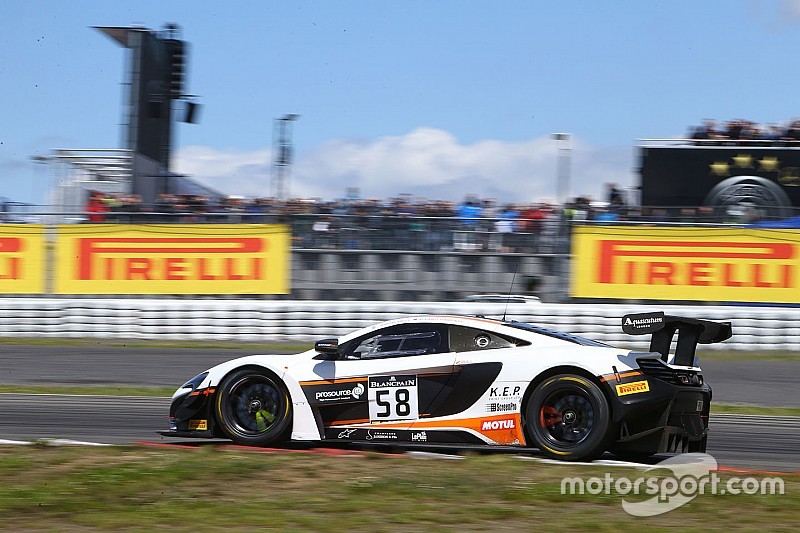 Garage 59 McLaren duo Rob Bell and Alvaro Parente took a confident flag-to-flag win in the Blancpain Sprint Main Race at the Nurburgring, but their start is under investigation.

Starting second, Bell got ahead of Qualifying Race winner Enzo Ide with ease, the Belgian leading a trio of WRT cars from Will Stevens and DTM regular Nico Muller.

Meanwhile, Marlon Stockinger and Andy Soucek both ran wide at Turn 1 from fourth and sixth respectively and the latter soon was forced to pit.

While Ide and Stevens quickly pulled away, Muller came under pressure from a string of cars led by the Mercedes of Jules Szymkowiak.

Although he failed to make a move, Szymkowiak kept up with Muller as the duo slowly pulled away from the rest.

With Bell building a lead of 2.6s in four laps, Ide, not risking an incident with his seemingly quicker teammate Stevens, let the Briton go past.

Although Stevens failed to close the gap on Bell either, he quickly shook Ide off, the Belgian now being attacked by Muller and Szymkowiak.

Szymkowiak took advantage of a mistake from Muller to steal fourth and the latter was soon forced to turn his attention to Norbert Siedler, who worked his way up from 11th.

The Polish driver made another overtake as he forced Ide to go wide at Turn 1, with Siedler soon also sneaking past the two Audis to claim fourth.

At the front, Bell's lead was four seconds at the start of the pit stop windows, which saw both him and Szymkowiak pit almost immediately.

Bell's partner Alvaro Parente comfortably rejoined in the provisional lead, which he kept after Stevens and Siedler both stopped for Rene Rast and Marco Seefried respectively.

While Rast rejoined just two seconds behind the leader, Seefried ended up in fifth with both Bernd Schneider and Christopher Mies ahead of him.

Rast slowly closed the gap to eventually run just one second behind Parente but the final 10 minutes saw the Portuguese fight back and rebuild his advantage.

While they crossed the line first, Bell's start will be investigated by the stewards and their victory remains provisional as a result.

Despite running less than two seconds behind him in the second half of the race, Mies failed to pass Schneider, the latter securing the final podium spot.

Seefried kept Maximilian Buhk at bay, the reigning champion and Dominik Baumann having to settle for sixth.

Laurens Vanthoor and Frederic Vervisch, who only took 25th in the Qualifying Race after a start incident, completed a strong recovery drive to finish seventh.

The two Rowe BMWs finished eighth and ninth respectively, the #98 of Maxime Martin and Stef Dusseldorp finishing ahead of Philipp Eng and Alexander Sims.

The top 10 was set to be completed by top Lamborghini's entrants Stefan Rosina and Davide Valsecchi before the former received a drive-through for track limits.