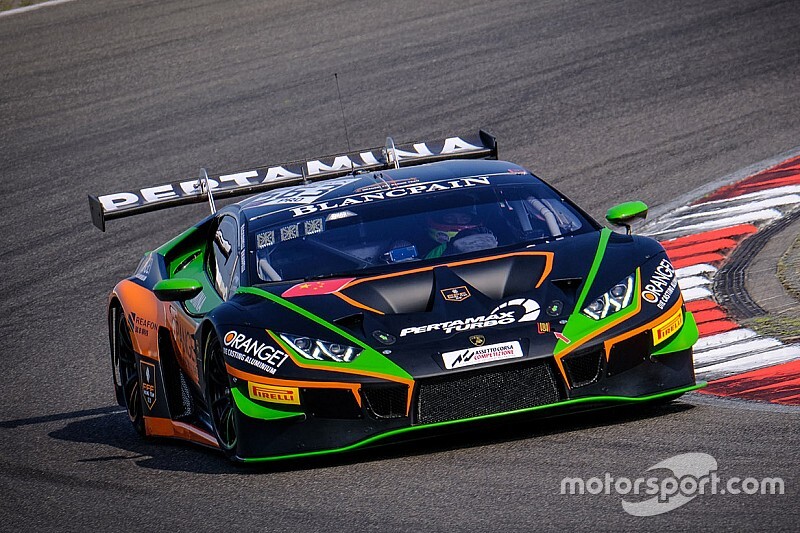 FFF Racing’s Andrea Caldarelli and Marco Mapelli moved into the lead of the Blancpain GT World Challenge Europe standings after leading a Lamborghini one-two in the first race at the Nurburgring.

The #563 Huracan GT3 started sixth on the grid but made inroads into the advantage of the #63 Lamborghini of Mirko Bortolotti and Christian Engelhart following the completion of the mandatory driver-change pit-stops.

Caldarelli sat behind Engelhart for several laps and the pair made contact on the run down to the first corner with just over 10 minutes of the one-hour race remaining.

But Caldarelli eventually seized the lead around the outside of Turn 8 and eased to a second victory of the year by nine seconds.

Having taken pole, the #63 with Bortolotti at the wheel made a decent getaway from the rolling start to lead the #4 Black Falcon Mercedes-AMG GT3 of Luca Stolz into the first corner.

Bortolotti never headed Stolz by more than a second in the opening stint, while Silver Cup pole-sitter Mattia Drudi ran a superb third in the Attempto Racing Audi R8 LMS.

Drudi eventually fell into the clutches of a charging Kelvin van der Linde, who recovered from a poor start to move past Simon Gachet (#25 Sainteloc Audi) before getting by Drudi at Turn 8.

Gachet also fell behind Mapelli ahead of the pit window opening as the latter in the Lamborghini began to move into contention.

Of the leading quintet, only Drudi stayed out as the pit window opened and it was these stops which turned the race on its head.

Engelhart just about made it back out in front of Maro Engel’s Mercedes which received a drive-through penalty for contact with the #10 Audi of Rik Breukers, dropping the #4 Mercedes of Engel and Stolz out of second.

Caldarelli then quickly closed in on the back of Engelhart, although the German fended off several overtaking attempts from Caldarelli and it looked as though the Italian had blown its chance after making contact with the #63 under braking for Turn 1.

This momentarily let the #25 Audi - now in the hands of Christopher Haase - into second place, but Caldarelli got back ahead at Turn 6 when Haase ran wide.

Caldarelli then stuck it around the outside of Engelhart and eventually grabbed the lead at Turn 8.

Engelhart then came under attack from Haase behind, with the other Audis of Christopher Mies and Dries Vanthoor making it a four-way battle for second.

Engelhart placed his Huracan in the right parts of the circuit to maintain second ahead of Haase, while Mies held onto fourth from Vanthoor.