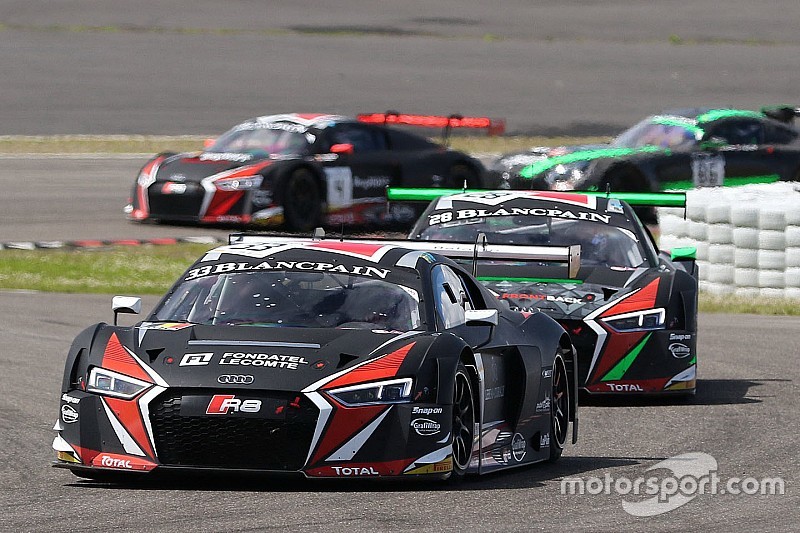 Will Stevens and René Rast took their first podium finishes of the season.

It was a good team result for the Belgian Audi Club Team WRT this weekend at the Nürburgring in the third round of the Blancpain Sprint Cup. Christopher Mies and Enzo Ide won again, this time the Qualifying Race on Saturday, becoming the first pair to clinch two wins in the Sprint Cup this season and keeping all their chances in the Sprint Cup standings (where they are 2nd, 3 points adrift the top), thanks also to a good 4th in the Main Race.

Will Stevens and René Rast took their first podium finishes of the season, crossing the line in 3rd on Saturday and in 2nd in the Main Race. There were more points finishes, with Dries Vanthoor-Nico Müller (5th in the Qualifying Race) and Fred Vervisch-Laurens Vanthoor, 7th in the Main Race, an excellent result after their weekend was ruined by a spin provoked by a rival in lap 1 of Saturday’s race.

Team Principal Vincent Vosse was happy at the end of the German weekend: “This time we can say we had a much better performance as a team, with more cars being able to shine and bring home podium finishes or points. Not everything was perfect, and we still had small issues here and there, but the overall result is positive. Chris and Enzo were again able to take a win, which is fantastic, and René and Will had their first podiums. The other cars also showed excellent pace but were unluckier. And despite this being a track where overtaking is not easy, Fred and Laurens went from P25 to P7 in the main race, which really means something. On top, our boys took again the Pit Stop Challenge. It’s not bad at all, we need to continue like this…”

The weekend started positively for the Audis R8 LMS, at ease on the German track: car #4 was fastest in free practice 1 ahead of car #2. Later, car #1 and car #33 shone in free practice 2 by taking P2 and P3. In Qualifying, four of the Belgian Audi Club Team WRT machines made it to Q3, with Mies-Ide in P3 and Vervisch-L.Vanthoor in P5. Stevens-Rast qualified 7th and and Müller-D.Vanthoor 12th, while Meadows-Leonard (20th) and Baptista-Jimenez (22nd) very narrowly missed the Q3 cut.

On a grey and very windy Saturday, the Qualifying Race started with some turmoil at first corner; unfortunately, the main victim was Laurens Vanthoor, touched and sent into a spin that put him in last position. At the forefront, Mies and Rast (together with the other R8 of Perera) luckily played the role of first chasers behind the leading McLaren of Parente. It was an intense and close fight for the entire first stint, with no position changes until the pit stop, which saw again a perfect job by the Belgian Audi Club Team WRT crews.

Ide rejoined the track as leader ahead of the McLaren of Bell and, just like at Brands Hatch, he managed to keep every rival at bay, crossing the line victoriously. The young Belgian was clearly happy: "We had a fantastic pit stop”, he commented, “the boys did a perfect job once again. I had a good lead, but when my engineer warned me that the McLaren was closing in, I must admit I was getting a little nervous. Rob and I had a fair fight and I have to say that as an amateur driver it made me very happy to be able to hold the more experienced professional drivers behind."

Will Stevens managed to take third, after passing Stockinger, making up the few seconds lost during the pit stop because of tangled seat belts. “We lost some time there, after which I had a great battle with Stockinger”, explained the Brit after conquering his first podium finish of the season, “Once I got past him I immediately knew that the gap towards the leaders was too big to close. But today was all about being in the front for tomorrow, and we moved up quite a bit.’’ Dries Vanthoor and Nico Müller in the #4 car also made it to the top 5, while Fred Vervisch was bound to finish in P6 the superb charge of car #1 from last position, but a puncture in the last lap again annihilated all efforts. Car #3 took P14 after a consistent race, while Leonard-Meadows, who had lost some time in the first part of the race following a first lap contact, took P28.

The Main Race started with Parente taking the lead with the McLaren, but never able to fly away. Stevens was always within 2 seconds during his entire stint, while Ide arrived to the pit stop in an excellent fifth position, right ahead of Nico Müller. Unfortunately for the Swiss, car #4 got its rear left wheel locked. After 20 seconds lost, it was sent back to the track without changing that tyre and shortly after, with Dries Vanthoor at the wheel, came a drive-through for a pit stop infringement. The car was eventually withdrawn.

The second stint saw a great charge from René Rast, but the German had to satisfy himself with P2. “It’s the maximum we could do, no way to get the McLaren, especially with dying tyres at the end”, explained René. Chris Mies gained some ground to finish 4th, while car #1 took 7th after a fantastic charge from the initial P24 to which it was confined by Saturday’s misfortunes. Both Vervisch, who took the start, and Laurens Vanthoor stormed through their stints to achieve the best catch-up of the day. Baptista-Jimenez finished 11th, missing the points zone by very little, after a solid race, while car #2 of Meadows-Leonard crossed the line in P18 after a race in the traffic.

The Blancpain community will be at Spa-Francorchamps on Tuesday 5 July for the test day of the Total 24 Hours of Spa, the event of the year, to take place on 30-31 July.

Provisional Drivers’ standings (Pro Cup) after Round 3 of 5:

Provisional Teams’ standings (Pro Cup) after Round 3 of 5: