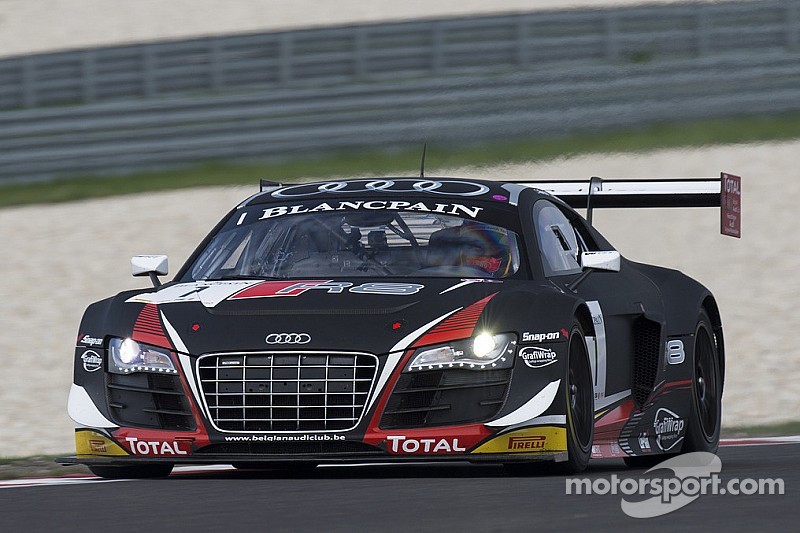 After winning the Qualifying Race on Saturday, local hero Laurens Vanthoor and César Ramos couldn’t do better than 3rd on Sunday.

“The Main Race shouldn’t be on Sundays!”: the same sentence has been heard quite a few times in the Belgian Audi Club Team WRT stand at the end of a weekend in Zolder that left some frustration. After winning the Qualifying Race on Saturday, local hero Laurens Vanthoor and César Ramos couldn’t do better than 3rd on Sunday.

Saturday’s win had come after a lively battle with team mates Rast-Ide, who took 4th and were ousted of the Main Race in the second corner. Stéphane Ortelli and Stéphane Richelmi (who suffered fever throughout the weekend) finished in the points on Sunday, while Mateuz Lisowski-Vincent Abril made a further significant step towards winning the Silver Cup, after taking a second and a first in the special class for the under-25.

With only the final Baku round left, the Belgian Audi Club Team WRT is still in the race for the Blancpain Sprint Series Teams’ title, although the gap from the top is now 10 points, while the squad’s driver pairs are now mathematically out of contention in the Drivers’ standings.

I showed myself pretty early and I thought he had seen me. It was not planning to do something crazy under braking, I braked just a little bit later.

Team Principal Vincent Vosse’s mood at the end of the race summarized well everybody’s feelings: “We would have hoped a better outcome in the Main Race, that’s for sure”, he admits, “especially here at Zolder for our home race, but for whatever reason, the Sunday race is proving difficult for us. We have won Race 1 four times and Race 2 only once this season… Here, Ramos-Vanthoor haven’t done any mistake, although the start could have been better, but at the end the Mercedes and one Lambo are in front...

For the rest, Ide-Rast were quite unlucky throughout the weekend, while our young guns Abril-Lisowski are getting very close to the class title, and Ortelli-Richelmi concluded well a difficult weekend.”
Qualifying went pretty well for the Team WRT boys, as Laurens Vanthoor did not miss the opportunity to take the pole at home (for the third time this season), stopping the watch in 1.28.580, with Rast taking an excellent 3rd, Lisowski 10th and Ortelli 17th.

The Qualifying Race, under a glorious sunshine, kept some surprises, as Vanthoor did not take the best of kick-off, contrarily to Rast, who took the lead in the canal curves. The two Audis were in control of the race when in lap 9, they had a slight contact in the Jacky Ickx chicane, as Vanthoor attempted to pass his team mate who had exited a little bit wider from the previous corner. Vanthoor succeeded, while Rast’s car went off-track, avoiding the gravel trap but losing three positions. First and fourth were their final positions, after César Ramos increased the lead of car #1 and Enzo Ide brought his safely home.

The title is now close, we just need to finish the race in Baku, a track new to both Vincent and me.

The stewards that investigated the incident after the race concluded in split responsibility and the expected internal discussion within the team was cut short, by Vanthoor recognizing he had misjudged the situation: “I must apologize to the team”, said the young Belgian, “that wasn’t the way it should have been. René had made a small mistake in the previous corner and I got really close to him in the run up to the Jacky Ickx chicane. I showed myself pretty early and I thought he had seen me. It was not planning to do something crazy under braking, I braked just a little bit later.

When I was alongside, he turned in on me. It was probably my mistake, for I was the car behind.” René Rast, on his side, admitted: “That’s racing” and Sporting Director Pierre Dieudonné had the obvious conclusion: “En-famille fighting happens often in motorsports and that proves that a racing driver is always a racing driver when it puts the helmet on! But you don’t want to see this very often, of course. Here we were lucky not to have our cars out of the race”.

The other two Audis R8 of the Belgian squad had a relatively frustrating race. Mateusz Lisowski-Vincent Abril could not repeat the pace had in qualifying and suffered some engine cut-offs, finishing in P17 but still taking a very useful P2 in the Silver Cup. Stéphane Richelmi and Stéphane Ortelli finished further aback after losing time when Richelmi spun and went into the gravel shortly before the pit stop, because of a brake issue. The young Monegasque, in addition, was sick and raced with fever.

On Sunday, for the Main Race, hopes were in the Belgian Audi Club Team WRT camp were as high as the sunshine, but the start saw the two Lambos out-powering the R8 of Ramos, which got also touched. Things went even worse for Ide as he was pushed out of the track into the barriers in turn 2. The race went on nervously, with two safety-car periods before drivers’ change. Despite an excellent pit stop, Vanthoor remained in P3, with the HTP Mercedes replacing one of the Lambos in P1.

Nothing much happened in this second stint: “I was quite fast at the beginning of my stint and did the fastest lap but I could not find an opportunity to pass Bleekemolen. Later, my rear tires started to deteriorate.”

Ortelli-Richelmi took an excellent tenth position, despite Richelmi not feeling much better than the day before. The older of the two Monegasques summed up: “Finishing in the points, after having started from P23, is really good. We pitted very late, five seconds before the window closed, and tactically that was the right thing to do. Richelmi has done an excellent job, despite his physical problems, and showed a very strong pace. He took him one weekend to be competitive on a GT car!”

Vincent Abril and Mateusz Lisowski finished right behind car #9, but most importantly took a precious win in the Silver Cup: “The title is now close, we just need to finish the race in Baku, a track new to both Vincent and me”, explained the Pole, “Here at Zolder, we signed the best qualifying of the season but in the races we struggled a bit and had some issues. Still, we are satisfied with what achieved.”

The Blancpain Sprint Series’ final round will take place, as last year, in the streets of Baku, the capital of Azerbaijan, on 1st-2nd November.

Provisional Drivers’ standings (Pro Cup) after Round 6 of 7

Provisional Drivers’ standings (Silver Cup) after Round 6 of 7

Provisional Teams’ standings (Pro Cup) after Round 6 of 7

Villorba Corse increases the pace in the Blancpain Sprint Series