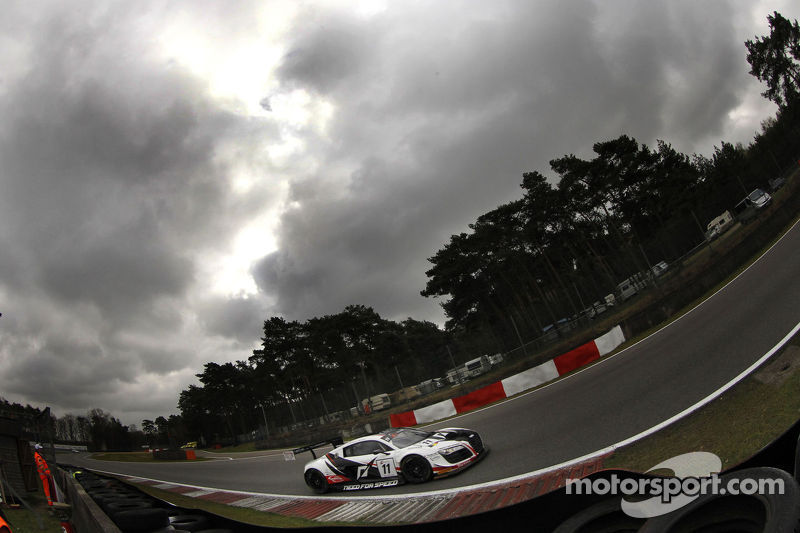 FIA GT Series set for Slovakian Ring challenge. At the halfway mark of the season, the Belgian Audi Club Team WRT has the upper-hand in the title hunt.

The 4th round of the 2013 FIA GT Series heads east to the challenging Slovakia Ring circuit, close to Bratislava this weekend. A quality entry list of spectacular GT3 cars are all set to thrill the passionate Slovak fans with a frenzy of sprint racing battles throughout the multi-class field. With both qualifying and main races held on Sunday the action will come thick and fast.

At the halfway mark in this year’s highly competitive season the battle for the 2013 crown is red hot with Belgian Audi Club Team WRT currently holding all the aces in the PRO category point’s standings. However, both the HTP Gravity Charouz Mercedes and Blancpain Racing Lamborghini will be aiming to re-kindle their previous victories, at Zandvoort and Zolder respectively, to launch another attack on the series leaders. 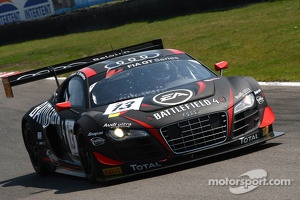 Stéphane Ortelli (MON) and Laurens Vanthoor (BEL) will be looking to increase the 10-point advantage in the standings, which they currently enjoy over WRT team mates Edward Sandström and Frank Stippler. A trio of second place finishes has been the consistent record for Ortelli and Vanthoor in 2013 so far.

Home fans will have their most internationally recognised driver, Stefan Rosina (SVK) to cheer on this weekend. From Púchov in the north west of Slovakia, Rosina returns to the FIA GT Series after missing the Zandvoort round. The 26-year old, who took a memorable pole position when the FIA GT3 European Championship visited the Slovakia Ring in 2011, will once again team up with Peter Kox (NDL) in the Blancpain Racing-entered Lamborghini Gallardo FLII. Rosina will be aiming to re-capture the sensational form that sealed victory at Zolder, in April.

Blancpain Racing enters a second Lamborghini for the Slovakia Ring event as FIA GT1 World Champion, Marc Basseng (DEU) returns to the cockpit of a GT3 car, after campaigning a WTCC SEAT so far this season. Basseng will share the V10 powered Lamborghini with Albert von Thurn und Taxis (DEU) and could prove to be a strong ‘wildcard’ challenger this weekend.

The man of the moment, Maximilian Buhk (DEU), had a dream July with a winning display at Zandvoort followed by success in the TOTAL 24 Hours of Spa. The reigning FIA GT3 Champion, along with team mate, Alon Day (ISR), will be aiming to use his recent form and mount another charge for maximum points. The HTP Gravity Charouz entered Mercedes SLS AMG GT3, which appears to hold the upper hand over the competition in low and medium speed corners, is again tipped to be a major pace setter.

With their mechanics promising to hunt down the proverbial ‘black cat’ which they believe has haunted them with bad luck so far in 2013, Sebastien Loeb Racing will be pushing for a return to the podium in Slovakia this weekend. Loeb and team mate, Alvaro Parente (PRT) started the season with a brilliant qualifying race victory in Nogaro but have since scored just 13 points after a long list of misfortunes befell them. 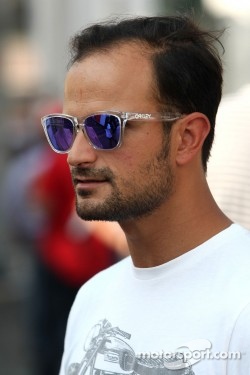 A welcome addition to the Pro Cup entry at Slovakia Ring will be the Race Alliance team, which enters a brand new Ferrari 458 Italia. The Austrian team has devised a stellar driver line-up for their FIA GT Series debut. Former Toro Rosso and Force India F1 racer, Vitantonio Liuzzi (ITA) is joined by ex Vita4one BMW driver, Mathias Lauda (AUT). Lauda enjoyed his best result of the 2012 season here with a fine second place in the Championship encounter. If that were not enough motivation for the Race Alliance squad then they also have the support of Baywatch star and all-American icon, Pamela Anderson.

The Brazilian blend as ever will be strong in the FIA GT Series as BMW Sports Trophy Team Brazil enters their usual brace of BMW Z4s. After BMW took both race victories at the Slovakia Ring in last year’s FIA GT1 World Championship events, the Antonio Hermann-led squad believe they have their best chance yet to consolidate upon their solid start to the season and challenge for a breakthrough victory.

In the Pro-Am category the battles are set to be as hard-fought as ever with multiple brands and teams in the mix for class victory this weekend. Audi, BMW, Ferrari, Lamborghini, Mercedes and Nissan all have a serious shot at winning the ultra-competitive class.

Nissan GT Academy Team RJN has a single entry for Slovakia with Alex Buncombe and Wolfgang Reip sharing the all-white Nissan GT-R NISMO GT3 car. With their other chassis undergoing repairs after the recent Spa accident and Lucas Ordonez racing in Japan this weekend, the Bob Neville-led squad will still be a major contender to go one better than their pair of second place finishes (Nogaro and Zandvoort) so far in 2013.

The action begins on Saturday morning with Free Practice. 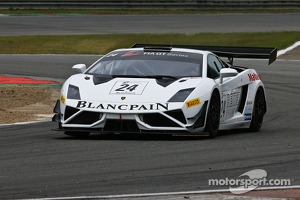 Stefan Rosina, #24 Blancpain Racing Lamborghini Gallardo FLII, Pro Cup “It is a pleasure for me to race at home and especially in a top competition like the FIA GT Series. We had a very good weekend in Zolder back in April, where we won, but it will be even tougher at Slovakia Ring as I am not sure the circuit will suit the Lamborgini as much. However, we will be trying our maximum as always and I am looking forward to seeing lots of fans at the track and pushing to the maximum.”

Edward Sandstrom, #13 Belgian Audi Club Team WRT Audi R8 LMS ultra, Pro Cup “I am looking forward to racing at Slovakia Ring as I was here in 2011 with the FIA GT3 Championship. Results-wise, I think that we have done very well so far this season. The team has helped us a lot during the pit stops and we have been quite good during the races too. Maybe Frank (Stippler) and I can improve our qualifying a little bit, but sometimes it is just the circumstances that made us a bit slow in qualifying but on the whole we are confident.”

Marc Basseng, #25 Blancpain Racing Lamborghini Gallardo FLII, Pro Cup “It is nice to be back driving a GT car and especially the Lamborghini which has shown how quick it can be this year so far. Apart from driving the Lamborghini about five years ago at the start of GT3 I have little experience with the new-look model but we are at Red Bull Ring for a test tomorrow so we will do some important work the. Of course, I love the FIA GT Series and have watched all the races on RTL TV this year. The competition looks even fiercer than usual and I cannot wait to join the battles.”

Vitantonio Liuzzi, #66 Race Alliance Ferrari 458 Italia, Pro Cup “I am happy to be racing for the Race Alliance team with a new Ferrari 458 Italia this weekend. This weekend will be a big challenge for us, however the team seems very good and obviously Mathias (Lauda) has experience in GT racing so we are very much looking forward to seeing where we can compete in this very tough series, which I have heard great things about. It will be my first time in this kind of GT car and of course as an Italian it is nice that it is a Ferrari, the most prestigious brand in the world.”

Allam Khodair, #0 BMW Sports Trophy Team Brazil BMW Z4, Pro Cup “Considering the size of our challenge, with new racetracks, new car for me and the fact all the team are Brazilian, we are improving every round. Moreover, since the beginning, my relationship with Caca - my teammate – has been very good. We understand each other well, and we think alike in many ways. The team is also very nice. It is a pleasure to work beside those people with so much history in Brazilian motorsport. For Slovakia, the expectation is to continue in this way. We want to further develop our cars to be in the top-three and I hope to take another step to get a podium.” 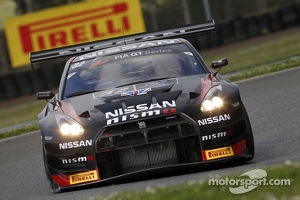 Wolfgang Reip, #35 Nissan GT Academy Team RJN Nissan GT-R NISMO GT3, Pro-Am “Slovakia Ring looks like a really nice track. There are some very fast corners, which I am excited to try out in the Nissan GT-R Nismo GT3. I will be spending some time on the Nismo Simulator before the race to learn the circuit so that I can hit the ground running when I get to Slovakia.”

Fabio Onidi, #51 AF Corse Ferrari 458 Italia, Pro-Am “This is my first race here but I am pretty sure it will be exciting to race on a new circuit like this. Last year the Ferrari 458 Italia did well with AF Corse and my team mate Salaquarda. I am looking forward to getting some good results and to improve our series point’s position. We are working hard at the AF Corse headquarters to prepare for this race, taking care of each and every detail on the car.”