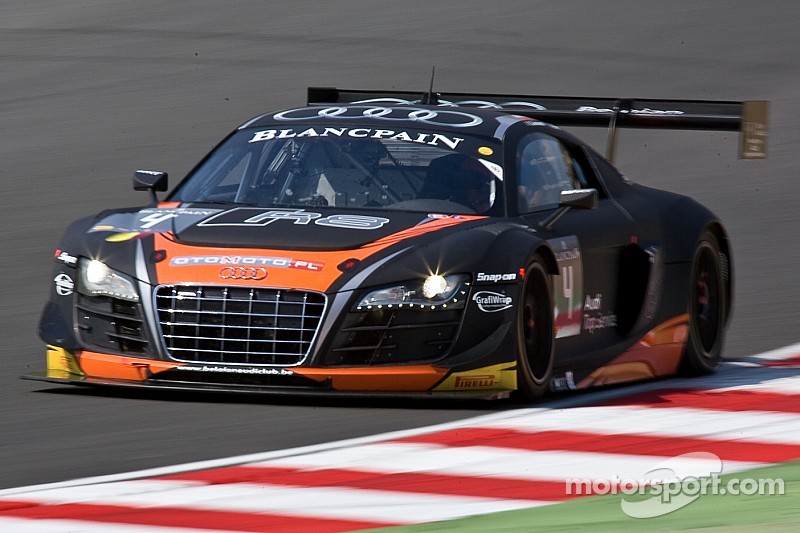 The “City of Fire” is preparing to host the event, which will have a stellar entry of 30 cars.

The long 2014 season of the GT élite is coming to an end this weekend: like last year, it will be the urban track in the streets of Baku, the capital of Azerbaijan, to host the closing round of the Blancpain Sprint Series. The “City of Fire” is preparing again to host in great style this event, which will have a stellar entry of 30 cars, with many top teams and drivers joining, attracted by the great happening and the prize money.

The Belgian Audi Club Team WRT, who enjoyed great success last year as it won both races, is clearly hoping to repeat the result, but most of all, it will focus on fighting in no less than …five championship battles, where it is still in the race for the crown. While securing the Drivers’ and Teams’ titles in the Silver Cup should be almost a formality, the Belgian squad will have to fight to overturn the situation in the Teams’ competition of the Sprint Series, where it currently lies second, 10 points behind the leader.

Theoretically, I still have a chance, but it’s going to be difficult.

In addition, the round will be decisive for the Blancpain GT Series championships, which are the overall standings combining the results in both the Endurance and the Sprint Series. There, the Belgian Audi Club Team WRT is leading among the Teams while Laurens Vanthoor is second in the Drivers’ rankings, with still a mathematical chance to opt for victory.

Calculating machines will be an useful tool this weekend on the shores of the Caspian Sea, as the Blancpain GT Series provides for many opportunities to use them. To summarize the situation, the Belgian Audi Club Team WRT has already secured the titles in the Blancpain Endurance Series, both Teams’ and Drivers’ (with Laurens Vanthoor). In the Blancpain Sprint Series, it is still running for the Teams’ one, although the 10-point gap will require excellent results to make it.

In the overall Blancpain GT Series, which takes into account all 12 events under the Blancpain banner, the Belgian squad enjoys a 17-point lead in the Teams’ classification, while Laurens Vanthoor, currently second in the Drivers’ standings 23 points behind the leader, still has a theoretical chance to clinch the title.

Team Principal Vincent Vosse is at the same time realistic and ambitious ahead of the grand-finale: “It’s the last round of a long season, which has been similar to the previous ones. We have had successes, certainly in the Endurance Series and at the Spa 24 Hours, but also some lows. I can’t avoid some frustration when looking at our season in the Sprint Series. We have been fast and competitive, mostly in qualifying and in the Qualifying races, but not very successful in the Main races, winning only at Zandvoort with Ide-Rast.

Vincent and I aim at doing well in Azerbaijan, although the track is new for both of us. But we won’t do anything stupid!

For whatever reason, there have always been some circumstances that have cost us many points. We cannot put all the blame on bad luck and race incidents, it is clear that we have done some little mistakes and lacked consistency, and we’ll have to draw conclusions from that. Now comes the final round and we are still in a position to fight for five titles.

I understand it will be difficult to get them all five, but we go to Baku to fight until the end and bring home as many crowns as possible. Last year, we had an excellent weekend there, winning both Race 1 with Rast-Mayr Melnhof and Race 2 with Vanthoor-Ortelli. We aim at having that kind of success again…”

Laurens Vanthoor, who is still in contention for the Blancpain GT Series Drivers’ title, is no less realistic and ambitious: “Theoretically, I still have a chance, but it’s going to be difficult. If I can clinch another title, I would be happy, but I don’t regard that overall crown as important as the Endurance or Sprint ones, because it is a combination of two separate things and not all drivers competed in both series. This said, together with César Ramos, we are extremely motivated to deliver the maximum, and to contribute to the team’s success in the two Teams’ championships still open.

We were quite successful in Baku last year, and I believe the Audi will be competitive again. Of course, Baku is a street circuit and we know anything can happen on that kind of track. On top, there is an entry much bigger than usual, with a lot of cars just coming for the prestige and the prize money. The track has been slightly redesigned, in the narrow section in-between buildings, and we need to see how this will play. What is sure is that there won’t be any space for mistakes, as the two races are on Sunday…”

The two of the five titles that are at closest reach for the Belgian Audi Club Team WRT are certainly the ones of the Silver Cup, the special class in the Sprint Series for under-25 drivers, as Mateusz Lisowski and Vincent Abril, after an impressive maiden campaign in the Sprint Series, are very close to reach their goal. “While we couldn’t achieve mathematical certainty at Zolder”, explains the Pole, “the situation is such that we just need to finish the races in Baku to get the points necessary for the title. Still, Vincent and I aim at doing well in Azerbaijan, although the track is new for both of us. But we won’t do anything stupid!”

For the two other cars of the team, #2 of Enzo Ide-René Rast and #9 of Stéphane Ortelli-Stéphane Richelmi, the goal will be to bring home as many points as possible for the team, a mission that should be facilitated by the fact that Rast and Ortelli won one of the races each last year in Baku and thus know the track perfectly.

The Baku round will adopt the format used last year, with free practice on Saturday and both the Qualifying and the Main races on Sunday, respectively at 9:15 and 13:55 local time, which is 3 hours ahead of Central European time.

Thoughts on the title at the Baku World Challenge

Aston Martin to take to the streets of Baku