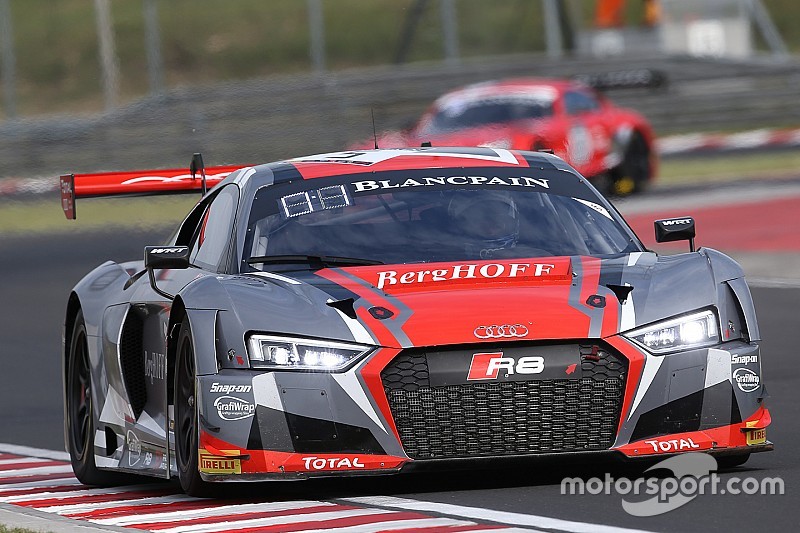 Dries Vanthoor and Marcel Fassler thrust themselves into title contention in the Blancpain GT Series Sprint Cup by completing a dominant weekend at the Hungaroring with victory in the feature race.

Fastest in every session, the Belgian Audi Club WRT pair had converted pole position to win the qualifying race and continued their good form to beat teammates Jake Dennis and Pieter Schothorst to the flag by 0.57 seconds.

Fassler, who ended a winless streak dating back to last year’s Sebring 12 Hours in the qualifying race, made a clean getaway to lead the opening lap from Christian Engelhart’s Grasser Lamborghini before a safety car was required to recover the Garage 59 McLaren of series debutant Martin Kodric.

Struggling with oversteer, Fassler was unable to pull away from Engelhart after the restart, but managed to maintain his advantage over the Lamborghini until the pitstops.

Engelhart came in at the first opportunity in the hope of gaining an undercut, but overshot his marks, which allowed Formula 3 convert Dennis to jump ahead of his co-driver Mirko Bortolotti.

In his best GT3 outing to date, Dennis successfully warded off the challenge of Bortolotti but never got close enough to attack Vanthoor.

Bortolotti then came under attack from Robin Frijns, sharing another WRT Audi with Stuart Leonard. Frijns briefly took the position with a late lunge at turn one, but Bortolotti managed to duck back underneath him on the corner exit.

Zolder winners Markus Winkelhock and Will Stevens made it four Audis in the top five, ahead of Sprint Cup championship leaders Maxi Buhk and Franck Perera in the HTP Mercedes.

Perera had run fourth before the stops, but lost ground with a slow stop that dropped Buhk to eighth behind Andy Soucek’s Bentley and HTP teammate Jimmy Eriksson.

After a compliant Eriksson moved aside at turn two, Buhk was on-hand to capitalise when Soucek clipped the back of Steven Earle’s lapped Kessel Ferrari and sustained front-left damage.

Behind Eriksson, Jules Szymkowiak and Fabian Schiller survived contact with Felix Serralles to win the Silver Cup in eighth overall.

Five crews head to the final round at the Nurburgring with a chance at the title, with just six points between them. Buhk and Perera’s lead has been reduced to three points over Bortolotti and Engelhart, while Vanthoor and Fassler’s victory has lifted them to third, four points off the top spot. Frijns and Leonard are tied with Stevens and Winkelhock on 54 points, six points back from the lead Mercedes, with 34 points available.