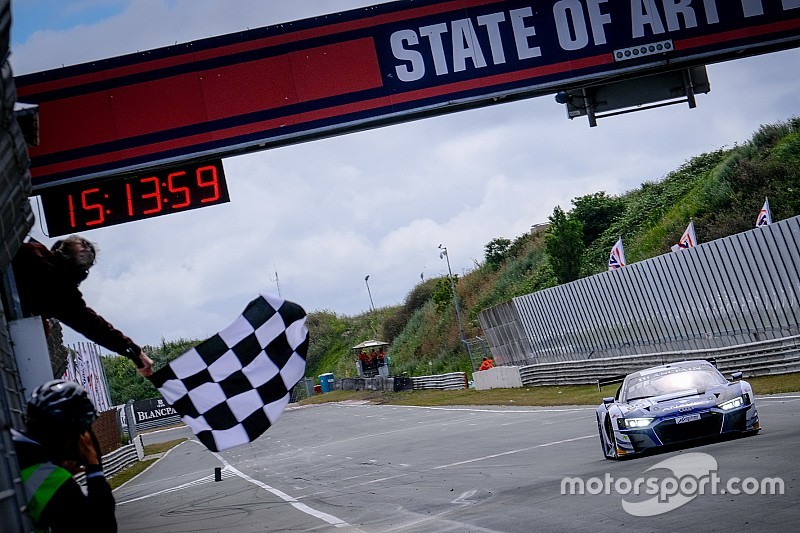 A pair of superb stints from Christopher Haase and Simon Gachet gave Sainteloc Racing its first Blancpain GT World Challenge Europe win of the season in the second Zandvoort race.

The Audi R8 pairing led comfortably throughout with Haase building a mammoth 13-second advantage ahead of the mandatory pitstops. Gachet continued the domination in the second stint, beating the Grasser Racing Team Lamborghini Huracan GT3 combination of Mirko Bortolotti and Christian Engelhart.

Ezequiel Perez Companc brought the #1 WRT Audi home third, just ahead of Luca Stolz and Maro Engel (Black Falcon Mercedes-AMG). By finishing ahead of FFF Racing’s Andrea Caldarelli and Marco Mapelli, Engel and Stolz increased their lead at the top of the standings to 8.5, although the Lamborghini duo remain ahead in the combined World Challenge and Endurance table.

Unlike Saturday’s race, the first lap passed without incident, with Haase taking the #25 Audi into the lead at Tarzan ahead of the #1 of Dries Vanthoor.

Engelhart moved the #63 GRT Huracan - racing under appeal after its data logger was found not to be working in Q2 – into fifth ahead of the pole-sitting Silver car of Mattia Drudi. Haase used the superior pace of the Mercedes-AMG and the clear air in front of him to build a healthy 6.316s lead over Vanthoor inside the opening quarter of an hour.

By the time the pit window opened, it had grown to over 13s as Vanthoor, Engel and Engelhart all pitted. Quick pit work from the GRT crew allowed Bortolotti to jump past both the #4 Mercedes and #1 Audi into the effective second place.

Perez Companc and Stolz – taking over from Vanthoor and Engel respectively – remained inseparable for the remainder of the race, with the pair split by just three-tenths at the flag. Gachet’s consistent lap-times ensured the lead never dipped below nine seconds, with the Audi comfortably taking the win from Bortolotti’s Lamborghini.

FFF Racing’s Caldarelli qualified a lowly 14th with Mapelli at the wheel in the opening stint. It was by far the quickest car on track in the second half of the race but could not force a way past Abril, who took over from Raffaele Marciello.

Aaro Vainio and Hugo de Sadeleer took Silver class victory in their R-Motorsport Aston Martin for the second race in a row, beating Drudi and Dutch team-mate Milan Dontje by over 13 seconds. Drudi was the highest qualifier in the category with fourth overall and held that position for much of the opening stint.

But the Aston Martin jumped ahead after the pit-stops and remained unchallenged to the flag.

It was a similar story in the Pro-Am class as Jim Pla ran a superb seventh overall in the early stages before handing over to Mauro Ricci after the stops. Ricci was overhauled during the pit phase by the Rinaldi Racing Ferrari of Rinat Salikhov and co-driver David Perel.

Ricci then lost further ground and slipped behind the AF Corse Ferrari of Louis Machiels before spinning on the final lap to gift the FFF Racing Lamborghini Huracan of Phil Keen and Hiroshi Hamaguchi the final step on the podium.