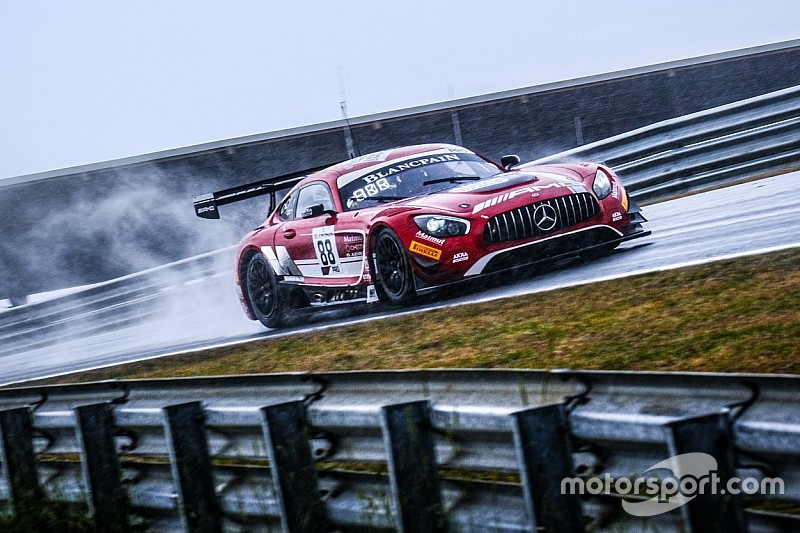 The pole-sitting #88 Mercedes-AMG GT3 built a lead either side of the mandatory pitstop to beat the Grasser Racing Team Lamborghini of Mirko Bortolotti and Christian Engelhart by over eight seconds.

Abril led off the rolling start into Tarzan, while Bortolotti narrowly maintained his second place from Lamborghini stablemate Caldarelli. The safety car was then deployed before the end of the first lap after Markus Winkelhock crashed at the high-speed Rob Slotemakerbocht corner.

The Sainteloc Audi R8 went into the barriers backwards after seemingly losing the rear of the car coming through the sweeper, and collected the #19 GRT Lamborghini Huracan of Rolf Ineichen.

At the restart, Abril again got the jump on the two Huracans behind and maintained a gap of just over a second-and-a-half until the pit stop window opened. Nine of the top 10 runners pitted when the window eventually opened, with the Silver class pole-sitting AKKA ASP Mercedes of Felipe Fraga staying out on track.

The order at the front remained unchanged, with Marciello taking over from Abril maintaining a lead of over a second from Engelhart in the #63.

The big loser in the pitstops was the #76 R-Motorsport Aston Martin of Ricky Collard and Marvin Kirchhofer, who dropped to seventh after running in fourth early on. This allowed the Black Falcon Mercedes of Maro Engel to close up on an increasingly close battle between Engelhart and Mapelli.

The trio were nose-to-tail for the remaining 16 minutes, with Mapelli the faster of the Lamborghinis. Engelhart, however, held on to hang on to second ahead Mapelli, with Engel just edging the Team WRT Audi of Ezequiel Perez Companc and Dries Vanthoor for fourth.

Fraga and team-mate Timur Boguslavskiy’s impressive race came to an abrupt end with just two laps to go as the latter slid off track at Turn 7.  The #90 Mercedes had held the Silver class lead for the duration and briefly challenged the top four before ending up in the gravel.

Hugo de Sadeleer and Aaro Vainio inherited the win with sixth overall in their Aston Martin.

FFF Racing’s Phil Keen and Hiroshi Hamaguchi claimed a comfortable Pro-Am win in their Lamborghini Huracan, beating the Ferrari of Andrea Bertolini and Louis Machiels by over six seconds.