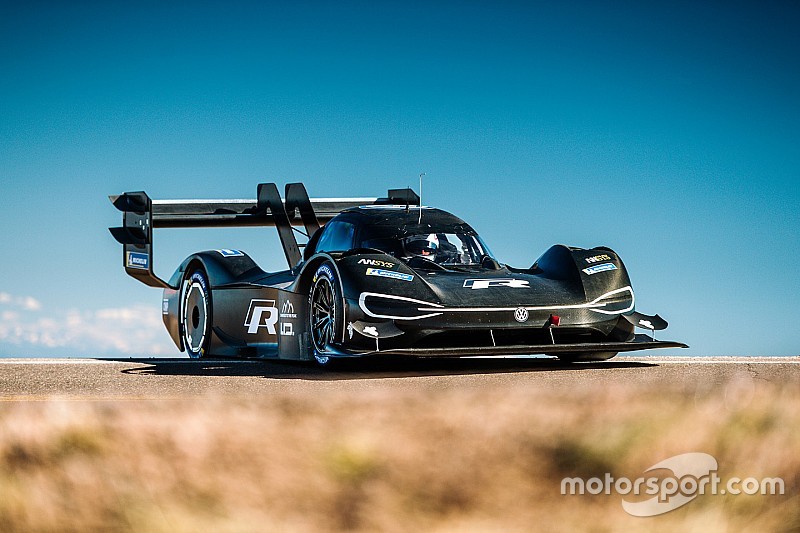 Dumas won the 2014, 16 and 17 Pikes Peak title in a Norma prototype, but the French star says his first test of Volkswagen’s all-electric car on the Pikes Peak road has raised the bar again.

“The I.D. R Pikes Peak is the best car that I have ever driven up this mountain,” said Dumas. “The acceleration and cornering speed are really impressive and, on top of that, the car is very convenient; thanks to the electric drive, I don’t need to change gears and can focus on the line instead.”

Due to the Pikes Peak track being a public road, testing for the June 24 event is limited to just three hours per day. Volkswagen made the most of that first test, with motorsport director Sven Smeets revealing they are on target for the e-cars record.

“The news from Colorado is very positive,” said Smeets. “We are on schedule with the preparations for the I.D. R Pikes Peak and can now focus on the fine-tuning.

“It is the result of a very strong team performance, initially here in Germany and now by our team on site in the USA. If we continue to work with focus and motivation, we are in with a good chance of setting a new record time for e-cars.”

Volkswagen Motorsport will now remain in America, fine-tuning the I.D. R in time for the race.

Dumas added: “It goes without saying that there is always room for improvements. In the remaining test drives, we will continue to optimise the tuning.

“I know the track at Pikes Peak like the back of my hand, but it is the first time I will be driving a racing car with electric drive. I am learning with every metre I drive in the cockpit of the I.D. R Pikes Peak.”

Dumas also spoke about the challenge of Pikes Peak – and the necessity for everything to come together perfectly for the record to be tackled.

“You only get one shot,” said Dumas. “If even only the slightest thing goes wrong, a new e-record is highly unlikely.”

And even if everything works mechanically, the weather can intervene with snow or hail arriving on the 14,110-foot summit of Pikes Peak on average on 18 of June’s 30 days. At the finish line, the average daily temperature in June is zero degrees Celsius.