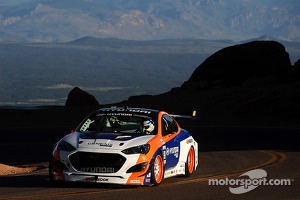 Dallenbach competed on the Rhys Millen Racing-prepared Hyundai Genesis Coupe to set the record. This was the same vehicle driven by Millen when he set the overall record last year.

The Hankook Ventus F200 race tires are designed to provide drivers with the traction and control they need to push their vehicles to the performance limit.

"The Rhys Millen Racing-prepared Genesis Coupe really complemented my aggressive driving style in setting the Time Attack world record," said Dallenbach. "With some very specific adjustments to the car this year that gave it a more neutral handling balance, I was able to build upon last year's world record set by Millen. It was thrilling to drive a racer that made full use of my years of experience at Pikes Peak."

"The Pikes Peak Hill Climb is one of the most intense races in motorsports,” said Paul Jho, Hankook motorsports manager. "We are extremely pleased with Dallenbach’s record and the performance of Rhys Millen’s vehicle.”

Hankook has increasingly become a staple on the American motorsports scene. The company has garnered enhanced visibility and sales increases as a result of its motorsports sponsorships and special racing programs. Hankook is an official sponsor of Formula Drift, and also supports teams competing in the Redline Time Attack series, 25 Hours of Thunderhill, Off-Road Racing and the Panam GP Series.

Barbados: The final doubleheader of the season