For the first time in the event’s history, a competitor’s first two runs of the week count as qualifying, with subsequent runs classified as practice.

Colorado Springs. The organizers of the 2013 Pikes Peak International Hill Climb decided to change the qualifying parameters for Sunday’s 91st running of the “Race to the Clouds”.

For the first time in the event’s history, a competitor’s first two runs of the week count as qualifying, with subsequent runs classified as practice. 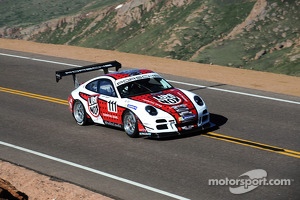 Therefore for the competitors in the Time Attack class, including Jeff Zwart’s Porsche 911 GT3 Cup car, everything was on the line today. The mission made more challenging as Zwart was still getting acclimated to his car’s unique chassis and drivetrain combination.

Today’s qualifying times were measured on the lower third of the mountain – the lowest elevation - with veteran David Donner, in a World Challenge-spec Porsche 911 GT3 Cup, taking the pole position.

Paul Dallenbach’s Hyundai Genesis – the car that beat Zwart by three seconds in 2011 - was second, followed by Zwart’s 911 GT3 Cup in third. But Zwart is feeling good about what has transpired on runs since qualifying was completed.

“I have spent my time getting used to driving a turbocharged Cup car, and it is a sensation that I have never felt here before in my 14 years running Pikes Peak.

I am going faster and faster on each run, and the even power that the car is producing from low to high altitude gives me great confidence for Sunday’s race. I am slicing the time different between me and the Hyundai with every run, and it should be a great race on Sunday,” said Zwart.

In addition, Zwart said that he and the BBi Autosport crew had to make sure that the GT2 turbo motor, which was custom fitted into the GT3 Cup chassis by BBi, communicated correctly with the well-developed Cup car drivetrain.

The combination seems to working fine with no glitches. A low-ratio sequential gearbox in the GT3 Cup car means he is busy through 156 turn course, but the combination makes the car very quick.

The 12.42-mile course, which used to be all gravel, is now fully paved, making Zwart’s race car right at home. Pikes Peak is the second oldest auto race in America, second only to the Indianapolis 500, and Zwart will give the course plenty of respect.