Zwart does personal best at Pikes Peak for podium finished – Thwarted by rain and snow.

Colorado Springs. While there was no official factory participation in this year’s Pikes Peak Hill Climb, the German brand fared very well in the hands of private customer teams. 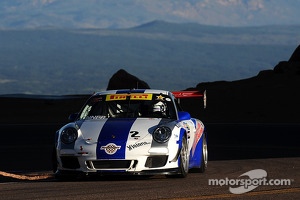 In the configuration of the GT3 Cup car, the iconic Porsche 911, celebrating its 50th anniversary this year, finished second and third in the Time Attack class at the second oldest motorsports event in North America.

David Donner took second-place in his spec Cup car while Jeff Zwart, running in his 14th Pikes Peak International Hill Climb, was third in a Cup car outfitted with a turbocharged Porsche engine.

Zwart has always had clean runs up the 12.42-mile course, and expected Sunday’s “Climb to the Clouds” to be the same. However, unexpected rain and snow throughout his race attempt up Pikes Peak put his Porsche 911 GT3 Cup car third class for the final standings, tenth overall for the race.

Zwart was making up time on both eventual winner Paul Dallenbach’s Hyundai Genesis and runner-up Donner’s Porsche during the late-week practice sessions, but both his rivals got clean runs up the Mountain Sunday.

Zwart was slowed by a fast-moving storm which dumped rain, hail and snow throughout his session. Although he turned his best time ever on the newly-paved road, his rivals went faster.

“While we are disappointed that we didn’t win the class, there were crashes all around us as the bad weather really affected the event, and we were able to stay on the road and run a fast time. Our Porsche performed well, and the Mountain was full of Porsche fans who really appreciated out efforts,” said Zwart.