The official Porsche driver will return to the famous mountain, site of his close second place overall finish in his first participation last year.

Second in the legendary hill climb event at Pikes Peak in 2012, in his very first participation, Romain Dumas will again take part in the famous American race. The official Porsche driver, winner of the "Open" class and best rookie in the event last year, will this year be in the "Unlimited" class. Behind the wheel of a Norma prototype, he will be aiming for the overall victory against competition that has probably never been so strong.

I always said that my participation in 2012 would not be the last one.

After coming so close to the ultimate dream… A little over 12 months ago, Romain Dumas was announcing his first ever participation in the Pikes Peak International Hill Climb with a 911 GT3 R. This first experience, of which the goal was to discover this unique race, would translate into a second place finish overall, only 17 thousandths of a second away from victory. It was an exploit for the Alès, France native who was not racing in the top class. With a first experience under his belt, Romain will be headed to the mountain for the "race to the clouds" on June 30. "After several long weeks of work, I’m happy to be able to return to Pikes Peak," he explains. "I always said that my participation in 2012 would not be the last one. That’s the case today, with an interesting project and a different philosophy from other competitiors. After coming so close to the ultimate dream, I was focused on coming back. I have to stay humble toward that impressive mountain, but I want to win overall. I know the challenge is perhaps event more difficult than last year. I was discovering Pikes Peak for the first time and I had no other goal but to gain experience and have fun. This year, my ambitions are bigger and the field of racers is at an extraordinary level." 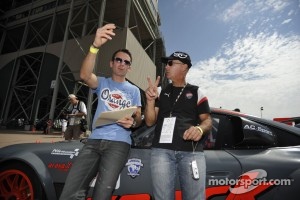 Like David and Goliath! Rhys Millen, winner in 2012, will be on hand with Hyundai, as well as Monster Tajima and also Sébastien Loeb with Peugeot, without forgetting entries from Honda and Toyota, among so many others. After the Porsche 911 GT3 R, Romain Dumas will face his competitors and the mountain in a Norma prototype. "Bravo to the Pikes Peak organisation for having gathered so many top constructors," he continued. "This makes the challenge that much more exciting. Several competitors have opted for very power cars with closed tops. For me, I chose a different solution with the Norma, which is a top reference in hill climbing events in Europe. During my career, I’ve often been in a David vs. Goliath situation and that’s certainly going to be the case at Pikes Peak ! There are specialists like Rhys Millen and Monster Tajima, but also a mulltiple World Rally champion who will be there with a manufacturer that impressed everyone with the famous 405 T16 many years back. I’m an endurance racing driver who likes rallying and have been dreaming about this race since I was a boy. It’s a little atypical, but it’s a challenge that fits me."

After racing several years in the United States, Romain Dumas will be returning to an atmosphere that he appreciates. "I’ve never hidden my love for racing in America," he admits. "Every season, I go to Daytona, Sebring, and I’ll be at the Petit Le Mans in October. Pikes Peak was a unique experience in 2012, both on the sporting level and personal level. The welcome from the people at the race, and also at Colorado Springs was incredible. With the Porsche, we had so much support…It was impressive and I can’t wait to see the fans again."

More details about the Norma that Romain Dumas will drive and his testing program will be unveiled in the coming weeks.