Porsche: race car, street car, pavement and turbo to meet at the summit of "America's Mountain"

Colorado Springs. In 2010, Jeff Zwart, from Corona del Mar, Calif., made Pikes Peak history and shook up the sports car establishment by running a road racing car – the Porsche 911 GT3 Cup - at the world’s most famous hill climb, smashing the Time Attack class record and winning his seventh championship. 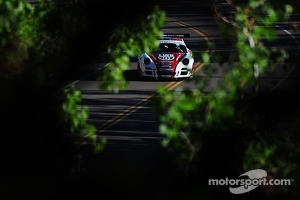 In 2011, Zwart drove his Porsche 911 GT2 RS turbo street car – not only up the Mountain, but on the Interstate from L.A. to Colorado Springs - and sliced 24-seconds off the record for a street-legal car, but was edged for the class title by an all-out race car.

So, for 2013, Zwart is combining the best of both worlds – the great race car he had in 2010 with the turbo power he had in 2011 to seek his eighth class title at the 91st Running of the Pikes Peak International Hill Climb, which starts today with practice sessions and will end Sunday, June 30, with the event itself.

On his decision to prepare and run this unique Porsche for 2013, Zwart said it was a matter of what makes sense.

“Our decision to run the 2010 Porsche 911 GT3 Cup, the most balanced car I have ever run at Pikes Peak, in conjunction with the Porsche 911 Turbo motor, the best power I have ever felt at the Mountain, was based on the data that showed the turbo delivered the most even power at both the bottom and the top of the mountain. This solved the high elevation horsepower starvation that occurs in normally-aspirated cars,” said Zwart.

With the Pikes Peak course now fully paved, the down-force and balance the Cup car has shown gives Zwart the feeling of “wearing” the car.

The 12.42-mile course, which used to be all gravel, is now fully paved, making the race car right at home. Pikes Peak is the second oldest auto race in America (right behind the Indy 500), and Zwart will give the course plenty of respect. The low-ratio sequential gear box means he is busy through the 156 turns, but it makes the car very quick.

A detailed map of the course

Ironically, it is Dallenbach in his full-blown HyundaI Genesis race car – the same car which holds the overall record at Pikes Peak - which will be the strongest challenger for Zwart this year in the Time Attack class.

The Porsche 911 GT3 Cup car, built on the same assembly line in Germany as the street-legal Porsche 911s, is raced all over the world in the Porsche Supercup series as well as various Porsche Carrera Cup and Challenge Cups. In the U.S., besides the IMSA GT3 Cup Challenge, the cars run in the Rolex Grand-Am GT and the American Le Mans Series Challenge classes.

Saturday is a fan fest at Pikes Peak, and the race Sunday begins at 5:00 AM MDT. Results and audio commentary will be on the official Pikes Peak web site – www.ppihc.com. Details of the audio and video coverage are below.

Fans around the world of the famed Pikes Peak International Hill Climb will be able to watch and enjoy the 91st edition of America’s second oldest motorsports race via the Internet for the first time on June 30.

The Pikes Peak International Hill Climb is working with Red Bull Media House to digitally live stream the “Race to the Clouds” on one of the media company’s global content delivery platforms – RedBull.TV. This will provide a front row seat to all the action for millions of viewers in the comfort of their home or office.

Race veteran Dan Cochell of 1580 AM in Colorado Springs will be the voice of the live stream, Chris Shearer of Shearer Brilliance will produce the show, Windstar Studios will provide pre-produced interviews with key drivers and racers and Access Media will provide cameras and operators on the course. The PPIHC will provide exciting overhead helicopter images along the 12.42-mile course to the summit finish line.

KRDO NewsRadio 105.5 FM and 1240 AM will broadcast flag-to-flag coverage of the 91st running of the Pikes Peak International Hill Climb. Coverage will include the technical inspections, qualifications, Fan Fest from downtown Colorado Springs on Friday, June 28, and the race on Sunday, June 30 (Sunday coverage also on www.ppihc.com).

A talented team of broadcast professionals and race experts will bring the race to a worldwide radio audience. The race on America’s mountain is one of the most difficult broadcasts on the globe and will be covered from three strategic locations, the start line, 16-mile, and the summit 14,110 feet above sea level, plus race recaps throughout the day from the KRDO news center.