Sébastien Loeb’s time of 8m13.878s for the famous Pikes Peak course in Colorado, USA, in the Peugeot 208 T16 Pikes Peak hit the motorsport headlines on June 30.

Five months after taking on the stopwatch at the world’s most spectacular hill climb event in Colorado, the 208 T16 Pikes Peak is back in the limelight thanks to two internationally-famed prizes, namely Autosport’s ‘Rally Car of the Year’ and Top Gear’s ‘Race Car of the Year’ awards. 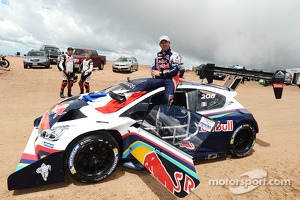 Sébastien Loeb’s time of 8m13.878s for the famous Pikes Peak course in Colorado, USA, in the Peugeot 208 T16 Pikes Peak hit the motorsport headlines on June 30. The car’s beast-like stance, awesome power-to-weight ratio of 1:1 (875hp, 875kg) and a performance package on a par with, if not superior to that of a Formula 1 car clearly caught the fans’ imagination, especially since it was designed in a period of just four months at Peugeot Sport’s Vélizy headquarters, near Paris. The incredible challenge which the French team rose to in 2013 certainly caused the specialists and general public alike to sit up and take notice.

Last weekend, the car was rewarded at the Autosport Awards evening, an annual gala which brings together the cream of motorsport and which honoured the 208 T16 Pikes Peak with the prize of ‘Rally Car of the Year’. Just days later, the equally illustrious Top Gear Awards ceremony named the hill-climbing Peugeot ‘Race Car of the Year’, another one of the motorsport world’s most prestigious honours.

Bruno FAMIN (Director, Peugeot Sport): “We are obviously highly honoured and very proud to have received these two awards. The Pikes Peak hill climb in June was an extraordinary experience and we realise now just how much interest our participation generated in the media, with the public and within the company. These two prizes are outstanding rewards. We are very touched and just want to savour these moments with all those in the team who put their hearts and souls into their work every day.”