There are some things you should know about Bobby Goodin 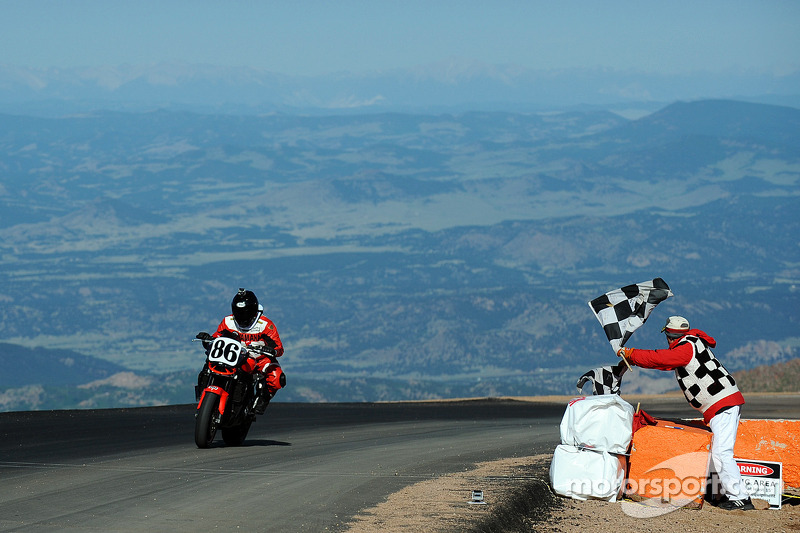 Did he belong at Pikes Peak? You decide.

Likely you know Bobby Goodin, 54, lost control of his Triumph motorcycle just after he took the checkered flag at the Pikes Peak International Hill Climb on Sunday. The bike crashed, and the Flower Mound, Texas competitor was thrown onto the rocks and likely died instantly.

But before you dismiss Goodin as another semi-senior-citizen who may have been over his head racing in an event like this, there are some things you should know about him.

In the 1980s, Goodin’s name was spoken often in the same sentences with bike racing legends like Freddie Spencer, Kevin Schwantz, Doug Polen and Randy Renfrow. As a high school kid from a suburb of Fort Worth, Goodin started racing flat track motorcycles and turned pro at 16. He was still in high school when his father, Paul, suggested they try road racing, so it was off to Hallett Motor Speedway, the road course in Oklahoma. Young Bobby won the first time out.

“We were driving back in the motorhome,” Bobby told Cycle News, “and my dad said, ‘I think we need to get rid of the dirt track bikes and go road racing.’”

They did, learning the craft at area tracks against competitors who were as tough as they were anywhere in the world. Goodin periodically raced against Spencer, from nearby Shreveport, Louisiana, another kid who got his start on dirt tracks and soon went road racing. According to the profile in Cycle News, the two rarely raced against each other in class or on comparable equipment, but one day he and Spencer were both on Yamaha RD400s.

Goodin recalled that Spencer had a 100-yard lead when Goodin began running him down. “I went around him and put about a hundred yards on him,” Goodin said. But his carburetor clogged, and he didn’t make it to the finish. “That really broke my heart because I wanted to put it on Freddie on equal bikes,” Goodin told Cycle News.

Goodin raced hard into the 1980s, culminating in one of those magic days in 1981 at the WERA Grand National finale at Roebling Road in Georgia. Goodin won a stunning five national titles that day, eclipsing Freddie Spencer’s record of four in 1977.

That led to a factory ride with Suzuki – well, almost.

Suzuki sales were sagging, and the company decided at the last minute to trim its two-man team to one rider. Wes Cooley stayed, Goodin was out. “It was a heartbreaker,” Goodin told Cycle News. He raced for a while longer, but the passion cooled. He had a decision to make: Stick it out, or go to work for Goodin Roof Systems, a commercial roofing company that his father, Paul, founded in 1978. That’s what he did, and he took over the company after spending nine years working for his dad. Goodin Roof Systems does office buildings, shopping centers, warehouses and apartment complexes.

But Goodin couldn’t stay away from racing forever. With daughters Jacquelyn and Melissa grown, he returned to racing, mostly vintage flat track motorcycles. Then, in 2013, he tackled Pikes Peak, finishing third in class on an Aprilla. And this year, he was back on a new Triumph 675R, knocking 40 seconds off his time from 2013 before the fateful crash, which occurred when the now-all-paved 12-mile course turned to dirt.

Kevin Brunson, also an accomplished Formula 2 racer from Texas in the 1980s, and a teammate with Goodin racing in the 1984 AMA U.S. Endurance Championship, was a member of Goodin’s Pikes Peak team, and he issued a statement on behalf of Goodin’s family:

“Even though many might consider this a tragic day with a needless death, those lucky enough to compete at Pikes Peak on a day like today knows even today was a wonderful celebration of life for every competitor.

My thanks to you all for promoting this great event. Please let all the safety personnel and medical personnel know how much we appreciate their efforts.

Our friend Bobby knew the joy of finishing and competing well, and that will bring all of us comfort as we deal with his loss.”

Services for Bobby Goodin are pending.