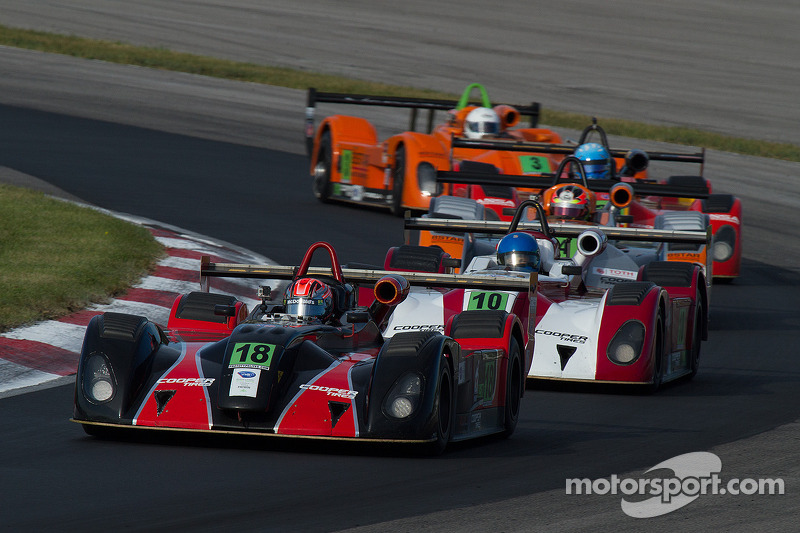 Heated battle for the lead keeps competitors on their toes on the road course in Elkhart Lake, Wisconsin. L1 Masters Championship points leader Jon Brownson in his No. 34 Eurosport took the victory.

Elkhart Lake, Wisc., (Aug. 10, 2013) - An early race start at Road America this morning made for a hectic race today for the Cooper Tires Prototype Lites powered by Mazda competitors as 22 Élan DP-02 entries tackled the longest course on their schedule for Round 9 of series competition.

Sean Rayhall of Comprent Motor Sports led the field to the green flag after a record qualifying lap during yesterday's session, followed closely by Ryan Booth and his No. 18 Performance Tech entry, but as the field approached Turn 1, a brilliant pass by Booth put him into the lead position, and kept him there until the checkered flag put him on the top step on the Lites 1 podium.

"We had a great start, and got into first position from the start," Booth said. "It was one of the longer races I've ever drove in my life. I led green to checkered, so it was very nerve racking. Sean (Rayhall) gave me a run for my money the whole time and Dan (Goldburg) was right there too. The Performance Tech guys gave me such a good car, they've been working their butt's off this weekend to give me everything I got and I just want to thank them, and I'm just stoked on the victory."

Booth's teammate Daniel Goldburg followed Booth on his winning pass and was able to make a move on Rayhall, however, he was unable to make it stick and Rayhall recovered his postion after a well executed pass on a restart and finished second.

"We got passed on the start," Rayhall said. "Dan (Goldburg) and Ryan (Booth) were really fast, but I got by Dan on the restart. Really hats off to the Comprent Motor Sports crew to get this Robert Talbot 14 to run second today. We were really out of it until mid-day yesterday and qualifying was honestly just pure luck to be there. We don't really have the car this weekend. Performance Tech with Dan (Goldburg) and Ryan (Booth) are really on top of their game. But really hats off to the Comprent Motor Sports boys because they worked so hard to be able to get it so I could even run with the leaders. We'll make a few changes, maybe something up our sleeve. But Ryan (Booth) and Performance Tech are really strong this weekend."

Goldburg took the third place step on the L1 podium, but not without a fight as he battled Rayhall all the way to the finish, despite two full course cautions that minimized green flag racing.

"Today was a good day," Goldburg said. "Performance Tech gave me a great car. I had a car that could challenge for the lead. I'm a little disappointed with third, but we got some good season points. Had a great run into Turn 1, we went three wide and I had a shot to go for the lead but fell into second. On the restart Sean (Rayhall) got around me and the three of us had a great battle to the end. Brought it home in third and I think I start third tomorrow. I think I have a good car for tomorrow and I'm excited for the next race."

The Lites 2 category was unable to finish competition today due to mechanical issues that plagued both Ludovico Manfredi of Ansa Motorsports, who ultimately took the class win, and Gustavo Torres of 8Star Motorsports who was forced to retire during a second caution period.

Round 10 of Cooper Tires Prototype Lites Powered by Mazda competition will be a 45-minute sprint, taking the green flag at 9:25 a.m. CT on Sunday, August 10.

The L1 Masters Championship was no contest for points leader Jon Brownson in his No. 34 Eurosport entry, as he pulled away from the rest of his classman and finished nearly 10 seconds ahead of Fransesco De Leonardis of of 8Star Motorsports. Miguel Benitez rounded out the MasterspPodium in third position for Ansa Motorsports.

"It was good to win the Masters," Brownson said. "It's always good to get the win. I want to improve upon my P5 overall and move up tomorrow. It's such a thrill to race on this storied track, 'Americas National Park of Speed'. And I just love it here and I'm really looking forward to tomorrows adventure."