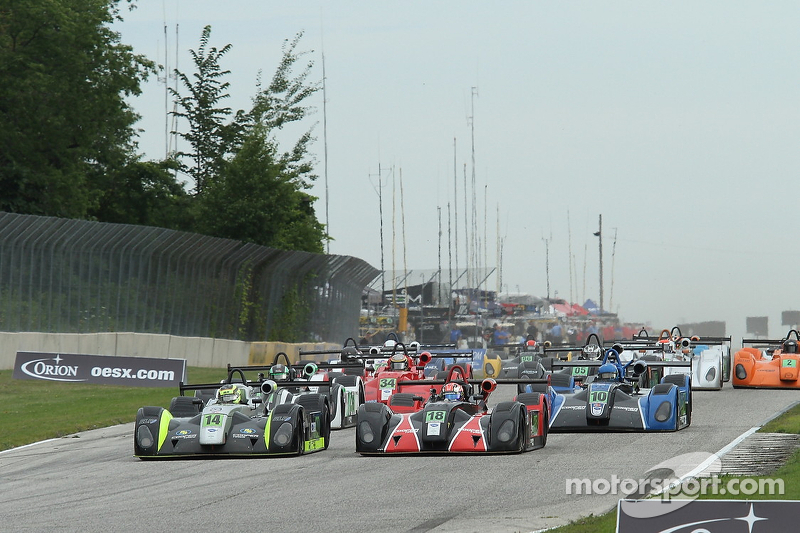 Elkhart Lake, Wisc., (Aug. 11, 2013) - An overcast sky and slightly cooler temperatures didn't diminish the heated competition in today's Round 10 of Cooper Tires Prototype Lites Powered by Mazda competition on the twists, turns and "Kink" of the 4.048-mile, 14-turn Road America course etched into the Wisconsin countryside.

Performance Tech driver Ryan Booth proved that he had mastered the winding ribbon of asphalt as he led flag-to-flag in his No. 18 Mazda powered Élan DP-02.

"The race went pretty well," Booth said. "Got another win back-to-back which is pretty cool first time this year. Performance Tech just gave me an awesome car all weekend. It was spot on, just kept getting better and better time stayed the same. I just can't be happier, and can't thank those guys enough."

And while Booth was busy tearing up the lead, those that followed were determined to make the most of their on-track experience with several position swaps between Comprent Motor Sport's Sean Rayhall, Booth's teammate Daniel Goldburg, Master Classman Jon Brownson and JDC Motorsport's Mikhail Goikberg.

The only yellow flag of the event came out at the halfway point to recover car No. 5 of Gustavo Torres that had slid into a gravel trap, and the ensuing restart jumbled positions two through four as Brownson made a strong pass in his No. 34 Eurosport entry as soon as the green flag flew and got the jump on Rayhall and Goldburg to move into second.

Rayhall quickly recovered his position from Brownson and Goikhberg made his move on Goldburg. And while Booth unofficially turned a faster race lap time than Rayhall, due to a failed transponder, IMSA regulations require that the race lap record be credited to the Comprent Motor Sports star.

"We started out with a decent car," Rayhall said. "We couldn't believe that the Comprent Motorsports guys got us to the point where we could somewhat stick with Ryan (Booth) for a little while. Ryan (Booth) and the Performance Tech guys along with Dan Goldburg and Mikhail (Goikhberg) just had really great cars this weekend. I'm just really fortunate to take the Robert Talbot 14 home in a second place finish, it's a good points stay for the team. Really want to thank Race Light and Racing Radios for all their support as well. But there was no reason (Ryan) should have been nervous throughout that race he really was the best of the class today and we're going to go back to work for COTA."

And while Rayhall and Booth were pushing the envelope on speed, Brownson and Goikhberg were in full battle gear throughout the entire race. Goikhberg was ultimately able to take the advantage from Brownson and slid into third as Brownson spun out on his own, and recovered finished the event in eighth overall.

"Jon (Brownson) and I were going back and forth the whole race," Goikhberg said. "But I'm really happy to be running in fifth the whole time and then finishing third. I'm happy with the results and I'm happy to be back on the podium. I love this track, it's my favorite!"

Series newcomer Matt McMurry had an exemplary run today as he kept his Performance Tech car firmly in gear and wrapped up the top five in the L1 class just behind his teammate Goldburg.

While the Lites 2 class only had one competitor today, Ludovico Manfredi took the action up a notch as he pushed his Ansa Motorsports entry up seven positions throughout the 45-minute sprint to finish in 11th overall, with the class win.

"This race was lonely," Manfredi said. "I was the only participant in L2. I tried to pick some targets in L1 but it isn't always easy because they have the faster car. But it is the track that makes the fun here so I enjoyed my race anyway."

Next up on the Cooper Tires Prototype Lites Powered by Mazda schedule is the 2013 Circuit of the Americas September 19-21. The IMSA Development Series will share the downtown, 2.04-mile, 12-turn street circuit with the American Le Mans Series presented by Tequila Patrón and the IZOD IndyCar Series.

The L1 Master's podium was shaken up a bit this morning as Miguel Benitez of Ansa jumped ahead of regular series winner Jon Brownson to take the top step of the podium. He was able to get the advantage on Brownson, who was recovering from his earlier spin to finish second in class.

"That was an exciting race," exclaimed Brownson. "That would be an understatement. I thought the restart went pretty well but my second move on Mikhail (Goikhberg), not quite so well. All you can do is try."

And rounding out the top three on the L1 Masters with plenty of "try" was 8Star Motorsport's Fransesco De Leonardis. All three Master Classman finished in the top 10 overall due to solid, patient and consistent race strategy.