Terry Borcheller and Mike LaMarra scored a seventh place position with Connor Bloum and Greg Strolzoff not far behind in 10th.

Sebring, Fla. – Burton Racing proved once again in the Sebring 200 held at Sebring International Raceway that the organization is truly a championship-caliber team and a force to be reckoned with in the IMSA Continental Tire SportsCar Challenge after scoring their second double top-10 result in as many races. Terry Borcheller and Mike LaMarra scored a seventh place position with Connor Bloum and Greg Strolzoff not far behind in 10th. 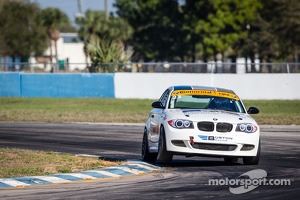 The packed 59-car field started the race cleanly through the tight Turn 1 of the tricky 17-turn circuit. Opening the race at the wheel of the No. 23 BMW Automotive Chemicals/Excelda BMW 128i, LaMarra was able to quickly get into a strong rhythm after losing a few spots during the initial ‘hairiness’ of settling in, and ran all the way up into the sixth position before handing the car over to his co-driver Borcheller.

Similarly, Strolzoff was performing well in the No. 22 Gold Eagle BMW 128i and piloted the Burton Racing machine forward to run in the 12th spot from his starting position of 23rd before ceding the controls to his co-driver Bloum.

Excellent pit stops by the Burton Racing crew just past the one-hour mark saw both cars cycle back out mid-pack, and Borcheller and Bloum went straight to work, each picking off cars ahead of them and working their way up the order.

Unfortunately a pit-speed violation on the No. 23 forced Borcheller to make a return drive through pit lane, but the undeterred team went right back to its race plan and continued its forward momentum.

Following the first of two caution periods during the race, the race went back to green with 31 minutes remaining and both Borcheller and Bloum kept their heads down and quickly made up lost time. In fact, Borcheller threw down a fast lap time of 2:25.909-seconds, just a few tenths of a second behind the fast-lap time of the race-winner.

The second caution of the race saw the event finish under yellow which cut short both drivers’ charge up the field, but not before each was able to break into the top-10.

“It was a bit of a messy day,” said team manager, Keith Burton of the race. “But I’m proud of all four of the drivers and the whole crew for working hard. It was good to finish two cars in the top-10. Now we have a little bit of time to get home and re-group for Laguna.”

The race will air on FOX Sports 1 on Wednesday March 19th at 1:00 PM (ET) and again on FOX Sports 2 on Sunday March 23rd at 7:30 PM (ET). The team will now see a brief break in race action to prepare for Laguna Seca the first weekend of May.

Mike LaMarra, No. 23 BMW Automotive Chemicals/Excelda BMW 128i: “I thought I had a good start to the race and made up a few positions, but then it got really hairy in the hairpin. I got hit from behind and then I missed a shift going into Turn 17 which lost me a few positions. I managed to make some of that up, but then a guy missed a shift in front of me and so I got right up into the back of him and was passed by two guys on the left. So after that everyone kind of settled in and I was able to run up the field.

We were really good on the front part of the track, so going into turns one, three and five I was able to make up some positions there that got me going into the hairpin. Our car was really good there, better than the others around me. Our car also didn’t fall off as much as some of the others so we were able to catch up the longer the race went. Overall, it was a really good race. Based on where we started and the car we started with, I think two top-10’s for Burton Racing is great and we are really happy with that.”

Terry Borcheller, No. 23 BMW Automotive Chemicals/Excelda BMW 128i: “We had a pit lane speed violation and then a second penalty, neither of which I entirely understand right now so obviously that wasn’t the best and is frustrating. But the car felt really good. We actually kind of created our own yellow by taking some contact and losing a bumper.

But it would have been nice to have been able to get another green and take advantage of that. I think we definitely could have finished in the top-five. I know we had a chance to podium if we hadn’t gotten the penalties and definitely a top-five if we could have gone green at the end. But such is racing, and the team did a great job this weekend.”

Greg Strolzoff, No. 22 Gold Eagle BMW 128i: “The start of the race was really tough, there was a lot of contact going into the hairpin and the car felt a little nervous, but I was able to get used to it. Then I started moving forward and picked off a bunch of spots. And Connor did a great job, I have to congratulate him on an amazing drive.

To start from as far back as we did and get all the way up to 10th was a great job by everyone, including Connor and the team. I’m really happy to come away with a top-10. It was a difficult weekend for us, we had some difficulty in practice and Connor never actually got to try this final setup before we started the race. So basically I am very proud of the job he did and the whole team.”

Connor Bloum, No. 22 Gold Eagle BMW 128i: “The race went pretty well. There was a big accident that happened right in front of me there at the end, but I was lucky enough to get around it. The car stayed under me really well throughout the whole race. I was able to slowly pick up spots as the race went on and capitalize on the mistakes of others. The crew did a great job getting the car ready. So I am happy with the result, although of course a bit disappointed we didn’t get to go back to green at the end there. But overall I’m happy and looking forward to Laguna Seca.”