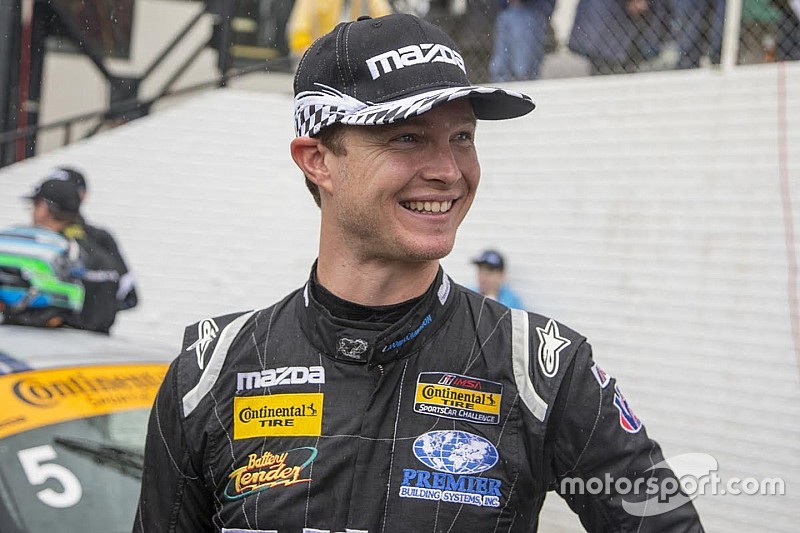 Motorsport.com spoke one-on-one with former NASCAR driver Chad McCumbee, who is currently making a name for himself in the sports car ranks.

The last time the NASCAR world saw Chad McCumbee was in the Camping World Truck Series finale at Homestead in 2013. Since then, he's been a very busy man.

He's presently preparing for the 2016 Continental Tire Sports Car Challenge (CTSCC) season, where he returns as the reigning ST champion. So after 119 starts in the top three divisions of NASCAR between 2006 and 2013, what led the now 31-year-old racer to start up a new career in American sports car racing?

I want to do the exact same thing I did on the stock side and that's make it to the top level. And that's the prototype Mazda has

It all came down to opportunity and the fact that ModSpace -- a sponsor he formed a relationship with in his time racing stock cars, was concentrating all their efforts on the sports car side of racing. He followed, but the transition did not come without its hurdles.

"It's way different," he explained to Motorsport.com. "You take it in steps. First, I had to learn how to turn right on purpose. Then I had to figure out how to use the clutch so many times per lap when in NASCAR, we only use that to get off pit road.

"The biggest driving obstacle was braking. I was used to slowing down a 3,400lb stock car with 800 horsepower. Then I jump into a 200hp, 2,300lb car and there's a huge difference there. I had never seen any of the tracks in my first CTSCC season. I had driven on the oval parts of some of them, but I've never turned down into the oval part ... On purpose! That was a huge transition and learning the ins and outs of sports car season."

He credits co-driver Stevan McAleer for helping him with as he learned how to become a race-winning and ultimately, championship-earning road racer.

"Another obstacle I had to face was racing in the rain, which this past season was really where we excelled and i took a lot of pride in that because that's something I worked on a lot," he added.

"We were very dominate every time it rained so that was a pretty awesome feat for myself."

The Mazda prototype is in his crosshairs

Earlier today, McCumbee made another step forward in his budding sports car career, being signed as a Mazda factory driver at Freedom Autosport, bringing McAleer along with him.

If a good opportunity arises, I would love to do it. That's why I've stayed involved with some of the regional stock car stuff

Chad McCumbee on returning to NASCAR in the future

"I want to do the exact same thing I did on the stock side and that's make it to the top level. And that's the prototype Mazda has. That's the goal and I feel the best way to take care of the future is to take care of the present. My goal now is to go see if I can go win another ST championship."

He's yet to actually get behind the wheel of the prototype, aside from simulations, but said "I could worry myself to death and try to get to that point, but I'm going to focus on winning more races here and I feel like that prototype shot may came soon."

And like every other sports car racer in the world, the ultimate career achievement awaits in France and he would love nothing more than to someday get there.

"We look at Daytona and we look at Le Mans, as sports car racers. Understanding the history and what that means in the motorsport world is tremendous and if I could get a shot at that, I would feel like I superseded what I did in the stock car world.

"That's obviously something we're looking at and who knows when that shot may come, if it comes. But we'll be working as hard as we can to get there."

Along with racing himself, the North Carolina native also wears the ownership hat as the owner of a Mazda MX-5 Cup team.

"Last year was our first season. All and all, it was a phenomenal year, starting our own MX-5 Cup team and getting a couple wins there. You couldn't ask for much more.  We're trying to grow that program. There's definitely things Steven and I have to learn about owning a business and running a race team. But we hit all of our goals and superseded several of them."

This past week, his ModSpace team (which is also co-owned by McAleer), finished first in class and 11th overall in a six-hour endurance race at the famed Sebring circuit in central Florida.

More NASCAR races on the horizon?

McCumbee is still very much interested in the stock car side of the motorsports world too: "There's actually been quite a bit of conversation over the last six months to go do that, but my main concentration is this ModSpace Motorsports program and everything we have going on the sports car side.

"If a good opportunity arises, I would love to do it. That's why I've stayed involved with some of the regional stock car stuff we've done the last couple years. Staying fresh and being able to jump in the seat is important and I'd absolutely jump at it."

Highlight of his career

Finally, when looking back at everything Chad has been able to achieve throughout his career, two moments stand out above the rest.

"The tough part for me when I first got into sports cars was understanding where the ranks were. I didn't understand the hierarchy and where am I trying to get to? The CTSCC is one of the most competitive series I have ever seen and. One of the biggest accomplishments of my career (was winning ST crown).

"Running my first Cup race though, starting that event at Pocono and looking ahead and seeing Jeff Gordon and Jimmie Johnson right in front of me was amazing. And having a successful race, that was huge also. It's hard to put them in order.

"But that ST title will be what will help propel us to the next level."

'Banned for life' Maldonado lucky to be in Monaco