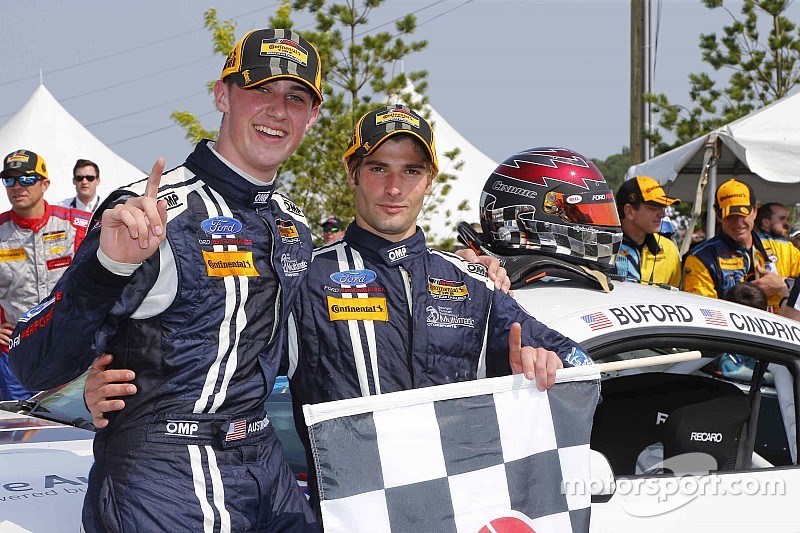 Austin Cindric is living the life other 16-year-olds dream of. Saturday, he co-drove the No. 158 Multimatic Ford Shelby Mustang GT350R-C to victory in the Continental Tire SportsCar Challenge, breaking a three-win streak by the No. 6 Stevenson Motorsports Chevrolet Camaro Z/28.R.

Next week, Cindric will race in the ARCA stock car series at Iowa Speedway. On June 21, he won the Red Bull Global RallyCross race at Daytona International Speedway. He has raced F2000 open-wheel cars, drove a Mercedes in the Bathurst eight-hour race in Australia. And he refuses to pick a favorite.

“Anything with four wheels,” he says.

Cindric’s success is due to two factors: One, he’s very good. And two, his father is Tim Cindric, president of Team Penske – essentially Roger Penske’s right-hand man in racing.

Cindric’s co-driver, Jade Buford, started the two-hour, 30-minute race and kept the Multimatic Shelby close to the front. For the first half of the race it appeared the Chevrolet Camaro pace car would win – there were multiple caution flags for crashes and mechanical breakdowns, including a hard crash by the pole-sitting Multimatic Shelby driven by Scott Maxwell and Billy Johnson.

But the last half of the race had some of the best competition of the year, with Cindric and Buford battling the Rum Bum Racing Porsche 911 of brothers Hugh and Matt Plumb, which finished second. Third was the No. 6 Stevenson Camaro of Andrew Davis and Robin Liddell, who have largely dominated the Grand Sport class this year.

The racing was even better in the Street Tuner class, where Spencer Pumpelly, in the No. 17 RS1 Porsche Cayman, traded the lead with Andrew Carbonell in the No. 26 Freedom Autosport Mazda MX-5 right to the end. Pumpelly shares the car with Luis Rodriguez, Jr., and Carbonell’s co-driver in the No. 26 car is Liam Dwyer, a retired Marine who lost a leg in battle, and drives with a prosthesis.

Finishing third behind the Nos. 17 and 26 was the No. 19 RS1 Porsche Cayman, a sister car to the winner.

CHASSIS CHOICE: The Prototype class will feature an all-new for 2017, and the FIA’s World Motor Sport Council has approved four chassis constructors Oreca, Onroak (Ligier), Riley Tech/Multimatic and Dallara. In the World Endurance Championship and the Asian Le Mans Series, only one engine manufacturer will be approved. For the IMSA TUDOR United SportsCar Championship, multiple engine suppliers will be allowed.

MAZDA MAKES A CHANGE: Mazda had entered two diesel-powered Prototypes, but scratched one entry as they try to decide whether to stick with the diesel engine or return to a gas-powered engine the brand ran in the American Le Mans Series.

But rather than have the two drivers scheduled to pilot the No. 70 Prototype entirely miss the race weekend, as they did in for the last two events at Detroit and Watkins Glen, Mazda found Jonathan Bomarito and Tristan Nunez a ride in the Continental Tire Challenge race. The duo shared the No. 25 Freedom Autosport Mazda MX-5, a sister car to the Carbonell/Dwyer MX-5 that finished second in the Street Tuner class. The two guest drivers finished sixth in class.

TUNE IN: The Mobil 1 SportsCar Grand Prix Presented by Hawk Performance takes the green flag at 12:05 p.m. ET, with Ricky Taylor and his Konica Minolta Chevrolet Corvette Daytona Prototype on the pole. Live coverage begins at noon ET on FOX Sports 1 in the U.S. and on FOX Sports Racing in Canada. IMSA.com and the IMSA App will stream live video, timing & scoring, and IMSA Radio’s play-by-play.