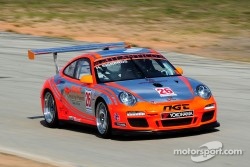 SEBRING, Fl. (March 18, 2011) – Henrique Cisneros and Glen Gatlin both survived close calls to score Platinum and Gold victories, respectively, in Round 2 of the IMSA GT3 Cup Challenge by Yokohama, part of the 59th Mobil 1 Twelve Hours of Sebring.

With three of the 17 laps run under two separate caution periods, rhythm was at a premium. Coming back from the second caution after lap 15, Platinum Cup leader Tim McKenzie lost control in turn 3, with NGT Motorsport’s Carlos Kauffmann and Alex Job Racing’s Michael Schein, running third and fourth at the time, getting collected in the aftermath. Somehow, pole sitter Henrique Cisneros, driving the #26 NGT Motorsport Porsche 911 GT3 Cup car, got through the melee to take his second victory.

“It was definitely dicey, getting through the incident,” said Cisneros. “You never like to win that way, but I guess a win is a win and I avoided hitting my teammate.”

McKenzie passed Cisneros for the lead in turn 1 early in the race – a move that caught Cisneros by surprise.

It was definitely dicey, getting through the incident.

“I didn’t expect it; he pulled a very late breaking move on me. I was taking it easy, trying to conserve tires early on, but maybe I should have been a little more aggressive. After that, he was running very well, I was trying to catch up without pushing too much. The first few laps, the track was really slick. I couldn’t get any turn in and the car was pushing through the corners, but it cleared up and by the end, it was fine.”

Alex Job Racing’s Cooper MacNeil finished second, the same podium spot he held for Round 1. MacNeil was also quite happy to have made it through the last incident, attributing it to being in the right place at the right time.

“It was luck,” said MacNeil. “I could feel that my own tires had a lot of pick up from the long caution, so I knew everyone else’s tires were like that too. The guys went in too hot and got loose and I got lucky. The track was hot and really slick but I’m thrilled that it came out the way it did for me.”

Rookie Glen Gatlin, driving the #17 Topp Racing Porsche 911 GT3 Cup car in the Gold Cup class (with wife Melissa listed as the sponsor) was also quite thankful just to have finished the race, much less earning his first win in the series.

It was a great race, we had a good, clean start-

“It was a great race,” said Gatlin. “We had a good, clean start – it was pretty exciting down into 3 and 4. Scott (Tucker) and I had another great race and Eduardo Cisneros gave me all I could handle. I’m just really thankful for this moment.”

The IMSA GT3 Cup Challenge by Yokohama features semi-professional drivers racing head to head in the largest single-make series in North America. Powered by one of the world’s most successful race cars, the Porsche 911 GT3 Cup car, the multi-class structure of the series teaches drivers essential skills for an eventual career in the American Le Mans Series presented by Tequila Patrón.

Rounds 3 and 4 of the IMSA GT3 Cup Challenge by Yokohama are April 29 – May 1 as part of the Larry H. Miller Utah Grand Prix.