Jade Buford will be joined on the front row by Nick Longhi, second fastest in the Grand Sport (GS) class. 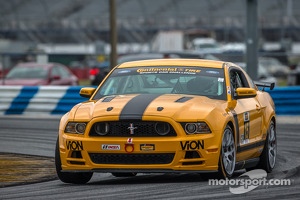 The red flag waved early in the session, with the lengthy delay giving Buford and his fellow GS competitors the opportunity for only one flying lap following the restart.

“We knew we were not as fast as the BMW or Porsche teams, so I knew it would take strategy to set up a good lap to have a shot,” said Buford, who now has seven career poles. “I gave it everything on the one lap that counted, and we made it count.”

Longhi ‘s first lap was his quickest in his bid for a second Daytona pole in three years.

“Obviously, in such a competitive series, you’ve got to go for it right away,” said Longhi, who co-drove to the 2013 GS title with Matt Plumb. “On my first lap I got out just about everything I could for the car. Unfortunately, I got caught in the middle of traffic following the restart and lost any chance of going faster.”

“Ken (car owner Murillo) gave us a fantastic car, and it was fast in both pre-season testing and practice this week,” Mosing said. “I knew I would be up there somewhere in the top five, and it’s fantastic to win the pole. I have a fantastic co-driver. If you think I’m fast, just wait. Eric and I have similar driving styles, and that’s because he’s been coaching me since the fall of 2008.”