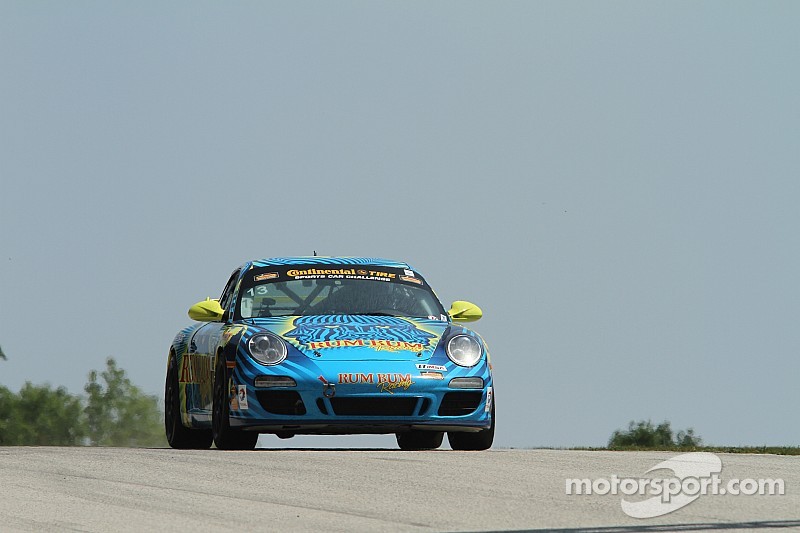 It was a heartbreaking day for the team and its drivers Matt Plumb and Nick Longhi...

Elkhart Lake, Wis. (9 August 2014) – In a day that saw Luis Bacardi’s Rum Bum Racing team fight hard from the back of the pack all the way up to lead the Continental Tire Road Race Showcase at Road America in the closing laps on Saturday, the stars did not align for the Rum Bum squad as a ball joint failure took the team out while running third with three laps to go.

It was a heartbreaking day for the team and its drivers Matt Plumb and Nick Longhi who had been welcomed to the classic Road America circuit by a large contingent of Rum Bum Racing fans - family and friends of Jennifer Bacardi who calls Wisconsin home. A brilliant effort by the team came up just a few laps short of taking a fourth consecutive podium finish at the 4-mile road course.

I come out and they tell me I’m in second – it was crazy,

Longhi opened the race from the fourth row and moved up to seventh in his stint, which included a longer yellow flag period for a multi-car crash in the ST category before opening a long green flag run. Longhi pitted the No. 13 Rum Bum Racing Porsche 40 minutes into the 2.5-hour race for fuel, tires and a driver change as he handed the car over to Plumb to take to the checkered flag.

As Plumb took to the track, the No. 13 Rum Bum Racing Porsche was not handling perfectly and he took to pit road with 1 hour and 25 minutes remaining for the crew to check out the car. The crew topped off the No. 13 with fuel and upon returning to the fray, Plumb ran 18th in line.

When a full course caution was displayed with an hour remaining, Plumb ran 16th and crew chief Joe Varde called him to pit lane for fuel and left side tires. The strategy call to take left side tires as well as a perfectly executed stop by the Rum Bum crew saw the No. 13 Rum Bum Racing Porsche leapfrog up the order to run second at the restart.

“I come out and they tell me I’m in second – it was crazy,” said Plumb. “But I’ve come to expect this from these guys because when we have issues when things go wrong, everybody just gets together and gets it done.”

The field went back to green with 40 minutes remaining and veteran sportscar racer Plumb pounced in Turn 3 to take over the race lead. As a gaggle of cars behind fought for position, Plumb was able to extend a one-second gap over the field.

A third full course yellow came out just laps later and as Plumb led the field back to green with 25 minutes to go, the No. 13 Porsche was at the disadvantage with the big V8 engined muscle cars in hot pursuit.

Making the most of his track position and momentum, as well as car placement, Plumb fought to hold on to the point.

Both the Rum Bum team and the fans in attendance were on the edge of their seats in what turned out to be a brilliant battle for the lead as Plumb eventually had to give way to the high-horsepower machine.

Despite losing the lead, it looked like Rum Bum Racing would once again taste the spray of champagne on the podium at Road America but it was not meant to be when the ball joint failure presented itself in the final laps.

“Every day that I’m out on a racetrack doing this for a living is fun, so I have to keep that in perspective,” said Plumb. “But not being able to hold position while you’re out there is terribly frustrating. Because you want to do well for the team, the fans, the owners, everybody. We did everything we could to finish well today. We had great pit stops, our driving was good – Nick’s pace was good. But it just is what it is.

The good and the bad of the whole thing was – the bad was that we didn’t finish the race due to a part failure. But the good was hopefully from the outside it was incredibly entertaining and it was worth it for everyone that came out and for all of the Bacardi fans and guests here this weekend.”

“The team is just phenomenal,” echoed Longhi. “I just can’t say enough about this team. They never get down, they always keep pushing, no matter the circumstances. It’s frustrating not to have the outright pace to keep up with the Camaros but we did the best we could today and that’s all you can ask for. A big thanks to Luis and Jennifer Bacardi and all of our Rum Bum fans for their support here this weekend.”

Rum Bum Racing will next travel to VIRginia International Raceway August 22-23 for Round 10 of the 2014 IMSA Continental Tire SportsCar Challenge.